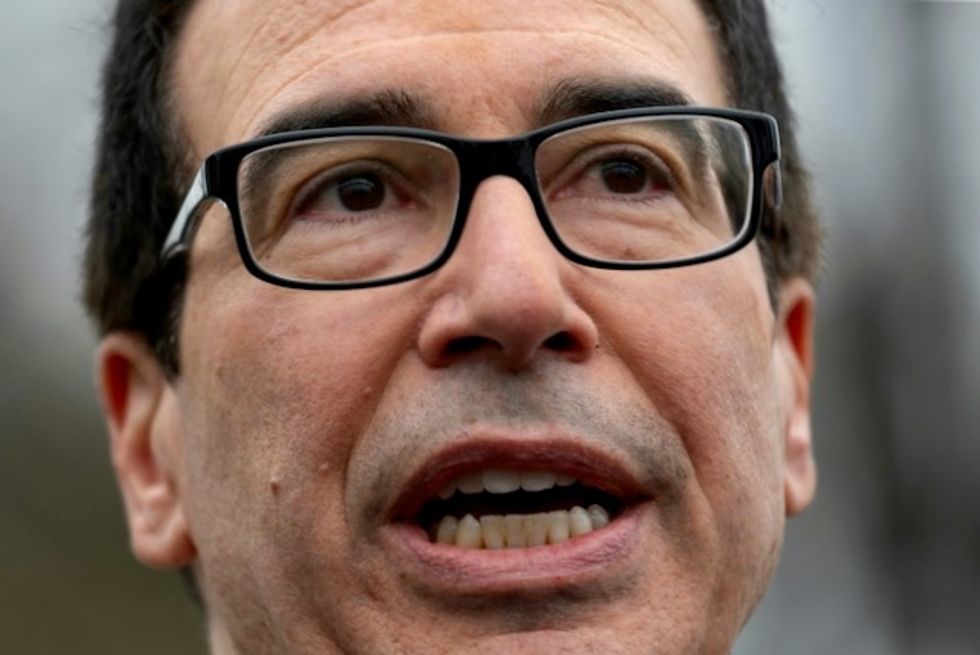 "Secretaries DeVos and Mnuchin have inflicted needless financial pain on student borrowers and their families."

Treasury Secretary Steven Mnuchin, Education Secretary Betsy DeVos, and the federal departments they run were hit with a class-action lawsuit Friday for illegal seizures of thousands of student borrowers' tax refunds during the coronavirus pandemic, which has left over 40 million Americans jobless and families across the country struggling to stay in their homes and keep food on the table.

"The administration has shown an utter disregard for the law and the needs of student loan borrowers during this difficult time, and their botched rollout of CARES Act protections is causing real suffering for families across the nation."

The suit (pdf)—filed by Student Defense and Democracy Forward in the U.S. District Court for D.C.—accuses the Education and Treasury departments of violating the Coronavirus Aid, Relief, and Economic Security Act (CARES) Act from late March, which halted all involuntary collection of federal student loans, including tax refund offsets, until the end of September.

"Secretaries DeVos and Mnuchin have inflicted needless financial pain on student borrowers and their families by failing to stop the illegal seizures of their tax refunds," Democracy Forward senior counsel Jeffrey Dubner said in a statement.

"The turmoil caused by the ongoing pandemic is no excuse for breaking the law," Dubner added. "Our class-action suit seeks to hold the administration accountable so that student borrowers can stay on their feet during this crisis."

Lead plaintiff in the case, Kori Cole, is a graduate of Heritage College in Lakeside, Colorado. She trained to be an x-ray technician but currently stays at home to care for her two children. As the complaint explains:

Ms. Cole's husband owns a custom woodworking business and earns approximately $50,000 per year, which is their family's sole source of income. The woodworking business suffered as a result of the Covid-19 pandemic, and produced almost no income for six to eight weeks earlier this year. Following the passage of the CARES Act, Ms. Cole and her husband expected to receive a federal tax refund of $6,859 and planned to use it to help pay living expenses for their family of four. However, their federal tax refund was offset in full to pay Ms. Cole's defaulted student loans, in violation of the CARES Act. As a result, Ms. Cole and her family are behind on their rent and bills.

The CARES Act's reprieve from offsetting tax refunds was supposed to provide financial relief to Ms. Cole and others like her during the pandemic. Ms. Cole brings this lawsuit on behalf of herself and other similarly situated borrowers to force the departments to comply immediately with the CARES Act directive requiring them to suspend their practice of offsetting tax refunds for defaulted student borrowers and to promptly return the amounts illegally seized.

The complaint notes that a website maintained by the Treasury Department suggests that it has offset more than $18.8 million from over 11,000 federal tax refunds since April 1, after President Donald Trump signed the CARES Act into law. "Similarly, the departments have offset, and may be continuing to offset, state tax refunds of borrowers in violation of the CARES Act," the suit says.

"In the middle of this devastating pandemic, Secretary Mnuchin and Secretary DeVos have been illegally offsetting tax refunds of student borrowers despite clear instructions from Congress and the president to stop," said Student Defense senior counsel Alice Yao. "The administration has shown an utter disregard for the law and the needs of student loan borrowers during this difficult time, and their botched rollout of CARES Act protections is causing real suffering for families across the nation."

"We are suing to make sure borrowers get the relief they are entitled to, and to hold this administration accountable for their continued failures to implement the CARES Act," added Yao.

Student Defense's statement announcing the case pointed to reporting that there are more than 44 million Americans who collectively have $1.65 trillion in student loan debt.

The new case follows another class-action lawsuit that Student Defense and the National Consumer Law Center filed in late April, accusing DeVos and the Education Department of garnishing the wages of student borrowers in violation of the CARES Act. The lead plaintiff in that case is Elizabeth Barber, who earns $12.89 an hour working as a home health aide near Rochester, New York.