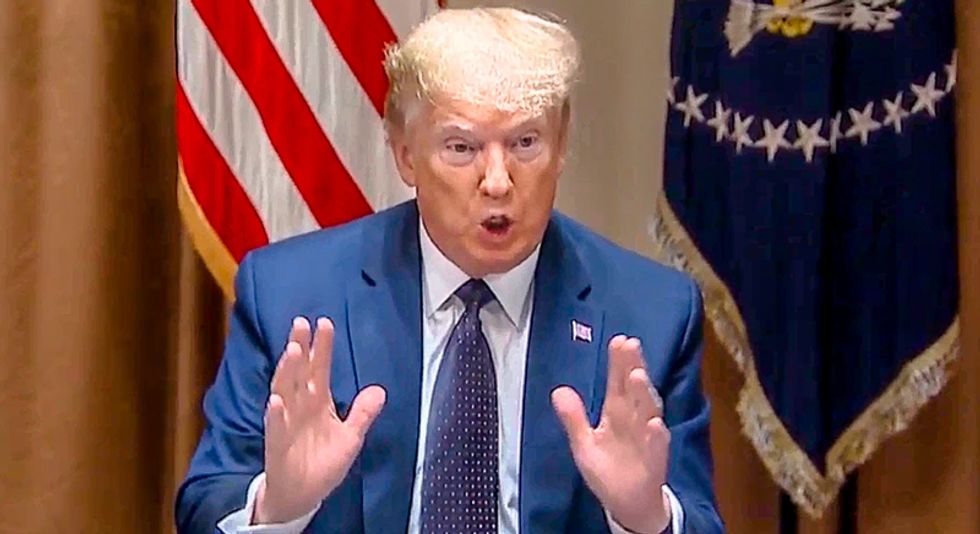 Donald Trump speaks from the White House's Cabinet Room (screen grab)
I don't think there's ever been a U.S. president with more influence with his political base that Donald Trump. All presidents are defended by those who support them, of course. Even the most unpopular failures have diehard fans who stick with them to the bitter end.

But Trump is unusual in that he has only ever attempted to govern on behalf of the people who support him and has no feeling of responsibility toward any other citizens. He has taken the already polarized Republican Party and turned it into a cult of personality. His influence over the 40 to 45% of the population who seem to idolize him is immense.

Perhaps it's because Trump was a celebrity with a TV show long before he entered politics that makes his fans love him so unconditionally. Whatever it is, Trump and his supporters have an unusually personal and almost intimate bond. It's clear after three and a half tumultuous years that they will follow his lead no matter what.

The political implications of this are profound. This weird relationship between president and base now completely dominates the Republican Party, apparently making it impossible for any prominent national figure in the party to allow even the smallest daylight between himself or herself and Trump. (Frankly, very few even seem to be trying.)

The red MAGA hat serves as an official symbol of Trump loyalty, and there is a certain part of his following that uses it as a tool of intimidation. Even more disturbing, there has been a spate of mass shootings and other acts of violence by people who have named Trump or his ideas as motivation.

In order to maintain his supporters' devotion, Trump has stoked the culture wars at every turn, ruthlessly dividing the country in order to keep his fans engaged. They receive such hypocritical gestures of solidarity as his newfound "pro-life" zealotry with enthusiastic gratitude — but what they really love are his brutal assaults on those they consider their political and cultural enemies. In that, Trump and his base are one.

So it should come as no surprise that when Trump faced the first crisis of his presidency that was not of his own making --- and failed to meet the challenge --- he would reflexively fall back on culture-war tactics to reinforce his base. His response to the COVID-19 pandemic has been abysmal, with the death toll now over 100,000 and the economy in dire straits. After bungling the response so badly that it will be studied by historians for centuries as an example of poor leadership, Trump is returning to his original instinct, which was simply to deny that the whole thing mattered, or was even happening.

His supporters have eagerly followed his lead, defying public health guidelines and demanding that their governors "reopen" immediately (or in Trump's own words of incitement, that they "liberate" their states.) Trump clearly believes that he can wish away the virus — or at least people's concern about the virus — by pretending that the crisis is over and that we can go back to normal.

As we speak, he's arguing with the state government of North Carolina about the Republican National Convention, which is scheduled for late August in Charlotte. Republican officials had reportedly been discussing how they could stage the event while observing CDC social distancing guidelines, and everything had been going smoothly. Trump, however, wants his big party, and wants it to be crammed with people screaming ecstatically at his every word. What he doesn't want is anyone wearing masks.

In fact, wearing a mask, or rather not wearing one, is fast becoming as much of a symbol of Trump fealty as those red MAGA hats. Trump's allies on Fox News have pushed it hard among the faithful (with the unexpected exception of Sean Hannity.)

As Salon's Igor Derysh reports, studies show that people who watch Fox are far more inclined to defy public health guidelines. But really, it's Trump himself who has turned masks into a culture-war symbol by ostentatiously refusing to wear one.

This makes little sense, of course, if he genuinely wants to reopen the country in a way that allows workers and consumers to feel safe going about their business. Masks and social distancing are common-sense ways to begin doing that, and normalizing that behavior will bring back the economy more quickly. But Trump has decided to pretend that the crisis is over, as I said earlier, and mask-wearing and social distancing don't exactly send that message.

I also suspect that his resistance is largely due to vanity. The man truly believes that wearing one will make him look foolish (which can only be described as amazing) and he may also have concerns about the mask rubbing off his thick orange makeup.

All of this comes as he's also implying it's somehow weak, unmanly and un-American to wear one. In fact, he's seized upon this as a new attack line against Joe Biden:

Some Republicans are actually pushing back on this, notably state governors who will have to deal with the resurgence of cases if people follow Trump's dangerous example. Even Senate Majority Leader Mitch McConnell has urged people to wear them. It's hard to know why these dissenters are stepping up now, but maybe it's because they see something really dark and ugly taking hold among the Trump faithful.

For instance, Republicans in the Pennsylvania legislature who have been railing against public health measures turned out to have concealed the fact that one of their own members had contracted the virus. They quarantined themselves but nevr told their Democratic colleagues, allowing them to potentially expose their family members and loved ones without knowing it.

According to the Washington Post, there are businesses in various parts of the country now barring customers from wearing masks in their establishments. This was from an interview with Kevin Smith, proprietor of the Liberty Tree Tavern in Elgin, Texas:

"If we're only allowed to be at 25 percent capacity, I want them to be the 25 percent of people that aren't p-----, that aren't sheep," Smith told The Washington Post. "Being scared all the time isn't good for your health. It suppresses your immune system."

Trump posted this tweet yesterday, cutely pretending that he was just making an observation:

The science is clear on this: Masks work. If everyone wore them when they were out in public it would make a significant difference in slowing the transmission of the virus. These people are pretending to be tough, but in reality they're just following the example of the president and living in denial.

Imagine a world where, instead of behaving so foolishly, Trump modeled sensible behavior by wearing a mask and social distancing and encouraging businesses to open up responsibly? His followers would buy red MAGA masks by the truckload and turn social distancing into the mark of macho American individualism. But he can't do that, of course, because stoking the culture war is literally his last hope of winning re-election.