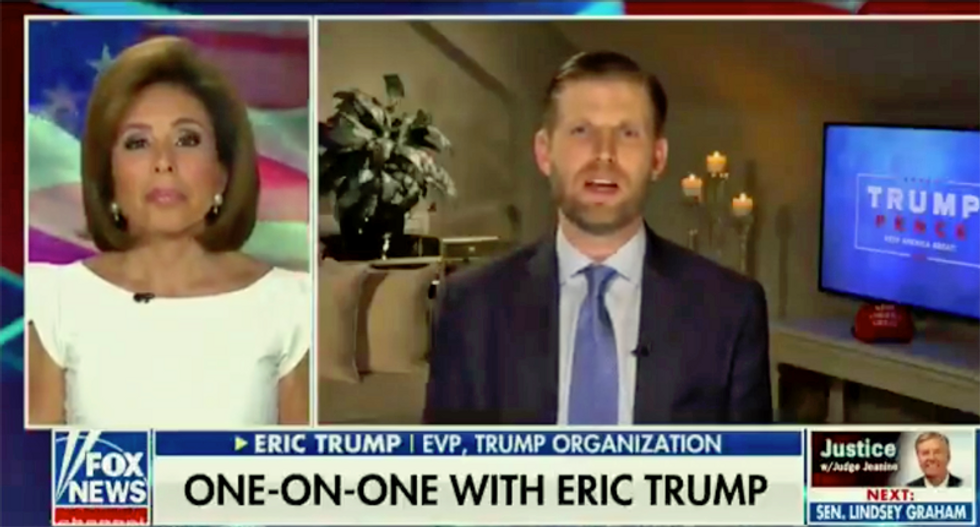 President Donald Trump's son Eric suggested that coronavirus lockdowns were a conspiracy to keep his father from holding 2020 campaign rallies during a Saturday appearance on Fox News with Jeanine Pirro.

With America leading the world in reported coronavirus fatalities, the president's son was focused on the 2020 campaign against former Vice President Joe Biden.

"Listen, Biden loves this," he claimed. "They think they're taking away Donald Trump's greatest tool, which is being able to go into an arena and fill it with 50,000 people every single time."

"So you watch, they will milk it every single day between now and November 3rd,"

"And guess what, after November 3rd, coronavirus will magically all of the sudden go away and disappear and everybody will be able to reopen," he predicted.

In the segment, his claims about his father's crowd sizes and popularity were both exaggerated.

Virginia Gov. Glenn Youngkin had hoped he could sign a bill restricting abortion rights in his state, but that dream died last year when Democrats won a special election that gained them control of the state senate.

Now local news station WRIC reports that Youngkin's own party is quietly shelving the legislation and doesn't even plan to give it a vote in the Republican-controlled Virginia House of Representatives.

Rep. Marjorie Taylor Greene (R-GA) complained this week that there are no lobbyists in America who are fighting for "the average white male" when they are denied career opportunities because of their race and gender, with an immediate and derisive backlash, reported Newsweek.

"In a video shared by Twitter account PatriotTakes, which monitors right-wing extremism online, Greene complained that lobbyists in the U.S. are just fighting 'for big corporations and industries' and no one is taking care of 'regular Mr and Mrs American, like mom and pops shops, the single moms trying to make it, the guy,'" reported Giulia Carbonaro. "The MAGA Republican lamented that 'there's not people fighting for regular Americans,' such as 'the average white male trying to climb the corporate ladder when his problem is being white and male.'"