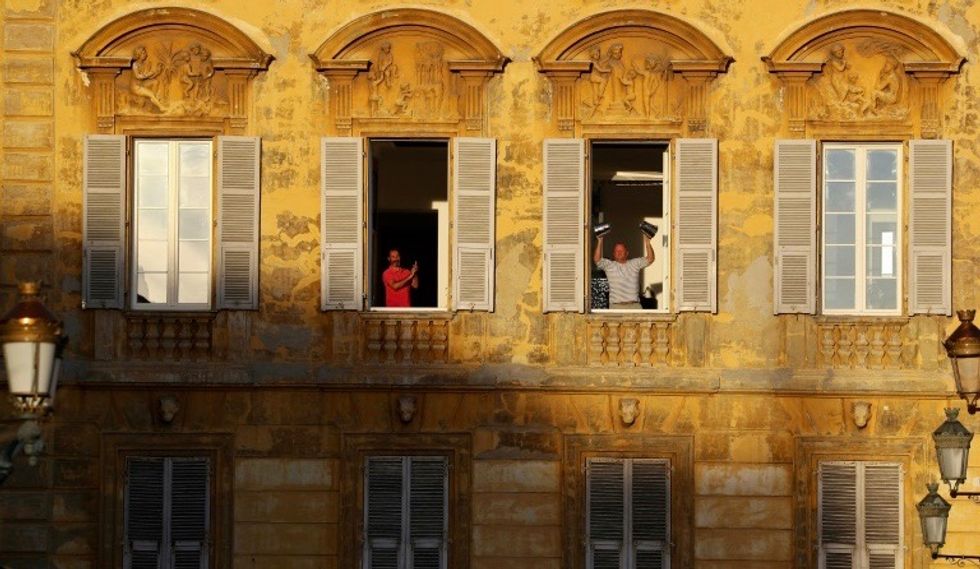 Millions of Europeans emerged from lockdown on Monday, with hardest-hit Italy leading the way out of its two-month coronavirus confinement.

At least 3.5 million people are now known to have been infected by the disease, but US President Donald Trump offered hope for an end to the nightmare, saying there would be a vaccine by year's end.

Around 248,000 people have died since the coronavirus emerged in China late last year and swept across the globe, given wings by the vast network of air routes that in normal times keep the modern world ticking.

Lockdowns imposed on half of the planet in a bid to stem the spread have derailed economies and left tens of millions of people out of work.

Politicians are now grappling with how to get the wheels turning again without sparking a second wave of infections.

Italy -- second only to the United States in its COVID-19 death toll -- was gingerly emerging into the spring sunshine on Monday, with construction sites and factories getting back to work.

Restaurants reopened for takeaways, but bars and ice cream parlours will remain shut. The use of public transport is being discouraged and everyone will have to wear masks in indoor public spaces.

"We are feeling a mix of joy and fear," 40-year-old Stefano Milano said in Rome.

"There will be great happiness in being able to go running again carefree, in my son being allowed to have his little cousin over to blow out his birthday candles, to see our parents," the father-of-three said.

Italy's economy -- the eurozone's third-largest -- is expected to shrink more than in any year since the global depression of the 1930s.

The previously booming economy in the United States was supposed to be the centrepiece of Donald Trump's November re-election bid.

But weeks of lockdown have left 30 million Americans out of work -- and the president's poll numbers sagging.

Trump has increasingly taken to blaming China for the outbreak, and says there is proof it started in a Chinese laboratory.

- 'History of infecting the world' -

China denies the claims, and the US Director of National Intelligence has said analysts are still examining the exact origin.

Most scientists say the disease arose naturally in the animal kingdom.

AFP / JIM WATSON US President Donald Trump has increasingly taken to blaming China for the outbreak, and claims to have proof it started in a Chinese laboratory

But Trump's chief diplomat on Sunday ran with his boss's position, citing "enormous" evidence that the virus originated in a Wuhan lab. He did not present any of that evidence.

"I think the whole world can see now, remember, China has a history of infecting the world and running substandard laboratories," Secretary of State Mike Pompeo said.

The renewed anti-Chinese rumblings from Washington set financial markets on edge on Monday, as traders fretted about tensions between the world's two largest economies.

The United States has the most coronavirus deaths in the world at more 67,600.

Trump had initially played down the virus, predicting the US would escape unscathed. He later warned it could cost 60,000 lives.

But at a live TV event on Sunday he acknowledged a higher eventual death toll.

He forecast great leaps in prevention over the coming months.

But, he acknowledged: "The doctors would say 'well, you shouldn't say that.' I'll say what I think."

AFP / MAURO PIMENTEL The number of confirmed COVID-19 infections in Brazil passed 100,000, including 7,000 deaths, but experts believe the overall number of cases could be 12 to 15 times higher

Germany's health minister on Monday poured cold water on that optimism, saying vaccines can "take years", describing their development as "one of the most challenging and difficult tasks in medicine".

Virologists say that until there is an effective vaccine against the coronavirus, life will continue to look different, with social restrictions becoming the norm.

Many parts of Asia have, however, begun to inch towards a post-pandemic life, with schools in the Vietnamese capital Hanoi reopening on Monday after two weeks without new infections anywhere in the country.

Malaysians headed back to work, while Australia and New Zealand discussed creating a "trans-Tasman bubble" that would allow travel between the two countries.

AFP / CHARLY TRIBALLEAU Japan has reported a comparatively small-scale outbreak, with 15,000 infections and 510 deaths so far, but there have been persistent fears about a spike

But regional heavyweight Japan extended its state of emergency to the end of the month.

Japan has reported a comparatively small-scale outbreak, with 15,000 infections and 510 deaths so far, but there have been persistent fears of a spike in cases.

Russia is rapidly becoming Europe's blackspot, with officials in Moscow urging residents to stay home in an effort to tamp down the growing daily tally of new cases.

"The threat is apparently on the rise," Moscow mayor Sergei Sobyanin told citizens.

In parts of the continent further along the infection curve, governments were starting to get to grips with the new normal.

Most are advocating continued social distancing and masks in public, as well as more testing to try to track infections.

Portugal allowed small shops, hair salons and car dealers to resume business from Monday, but ordered facemasks to be worn in stores and on public transport.

Nose and mouth coverings are also mandatory on public transport in neighbouring Spain.