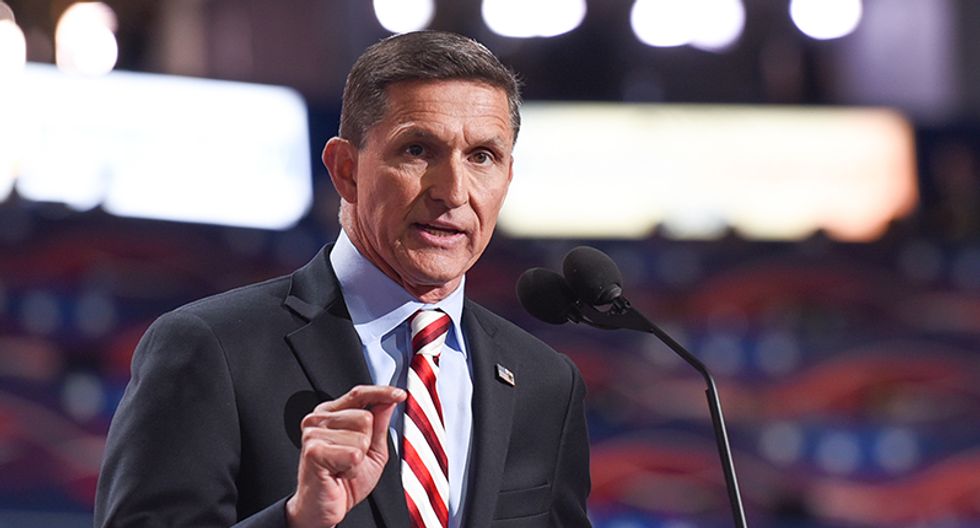 Michael Flynn campaigning for Donald Trump during a prime speaking slot at the RNC Convention in 2016. (Image courtesy of GOP.com)

Fred Fleitz, a frequent guest on Lou Dobbs' Fox Business show alleged in an editorial that "unmasking names of US citizens from intel reports is NOT routine."

According to George Croner, the former principal litigation counsel at National Security Agency and FISA expert, Fleitz isn't exactly the expert he is presenting himself to be.

"Fleitz's references to his own experience add nothing to the debate," wrote Croner. "As others have noted, the vast bulk of unmasking requests to NSA relate to NSA's reporting derived from Section 702 collection. Section 702 was first added to FISA in 2008, years after Fleitz's time in the State Department and at CIA."

"The reporting requirements related to 'unmasking' are found in Section 702, did not exist in FISA prior to the enactment of Section 702, and are not required as part of the reporting on FISA Title I activities," Croner explained for why Fleitz never had any experience using FISA for these purposes.

"So, there is no reason Fleitz would necessarily have been exposed to any 'unmasking' issues during his time at CIA or the State Department," Croner continued. "Indeed, it's hard to say whether Fleitz ever occupied any position at CIA where 'unmasking' decisions would have been within his purview. Fleitz apparently has no familiarity with what NSA's Section 702 Minimization Procedures say about 'unmasking.' Generally, those procedures permit removing the generic identifier in an intelligence report and providing an authorized dissemination of the identity of a U.S. person."

Croner explained that when the NSA receives a request by an authorized person that meets their requirements, it is approved by a limited number of NSA officials. There's a basic principle that allows for "unmasking" where information "is necessary to understand the foreign intelligence information or assess its importance."

He noted that unmasking requests are pretty frequently reviewed by the NSA, Department of Justice National Security Division and Office of the Director of National Intelligence. In fact, Trump's administration has approved more people be unmasked in the first three years of his administration than Obama did in his final three years. Trump has ordered over 36,200 people be unmasked in intelligence reports.

He did agree with Fleitz that unmasking is treated as a very serious issue. Despite Trump's 36,200-plus unmaskings, it isn't set up to be easily approved and it isn't routine.

"The NSA Minimization Procedures pursuant to which these disseminations are made are specifically approved by the FISA Court in connection with each Section certification presented to the court," the thread continued. "Moreover, FISA requires that those minimization procedures meet the statutory definition of 'Minimization procedures' in §101(h) of FISA, and that the FISA court find those procedures to be 'consistent with the fourth amendment to the Constitution,'" which prohibits unreasonable searches and seizures. There have been annual reports on FISA information since 2014 that provide public information.

"NSA's function is to provide policymakers with foreign intelligence information needed for those policymakers to conduct US national security and foreign policy," Croner continued. "It is not a function of NSA to second guess or overrule requests for US Person identities that are submitted by approved requestors and meet the requirements of NSA's FISA court-approved Minimization Procedures. I can only imagine how Fleitz and others of his ilk would react if NSA suddenly started refusing to comply with 'unmasking' requests originated from officials in the current administration."

He explained that depending on the circumstances, an unmasking request may or may not be classified but that the decision of whether it is should be made by a classification official looking at all of the facts.

"If Fleitz believes that there is no reason to classify the response to an 'unmasking' request, he is simply wrong. If you don't think that the public revelation of 'unmasking' requests and NSA's responses to those requests (information like that foolishly declassified by Acting DNI Grenell) doesn't send foreign adversaries scurrying to review their own communications records to see who was talking with whom on what circuit at those particular times, then he needs to go back to the Farm (Camp Peary) and brush up on his tradecraft," he closed.

Fleitz has spent most of the day playing the victim on Twitter, while other intelligence experts question his editorial. He said that people are attacking it because they're afraid of him, not because he's factually incorrect. Croner's line-by-line rebuke of the facts he said was an attempt to set the record straight while there is "too much misinformation being peddled on the topic of unmasking."

You can read the full thread here.