From opera to bread line: Italy's surge in the 'new poor' 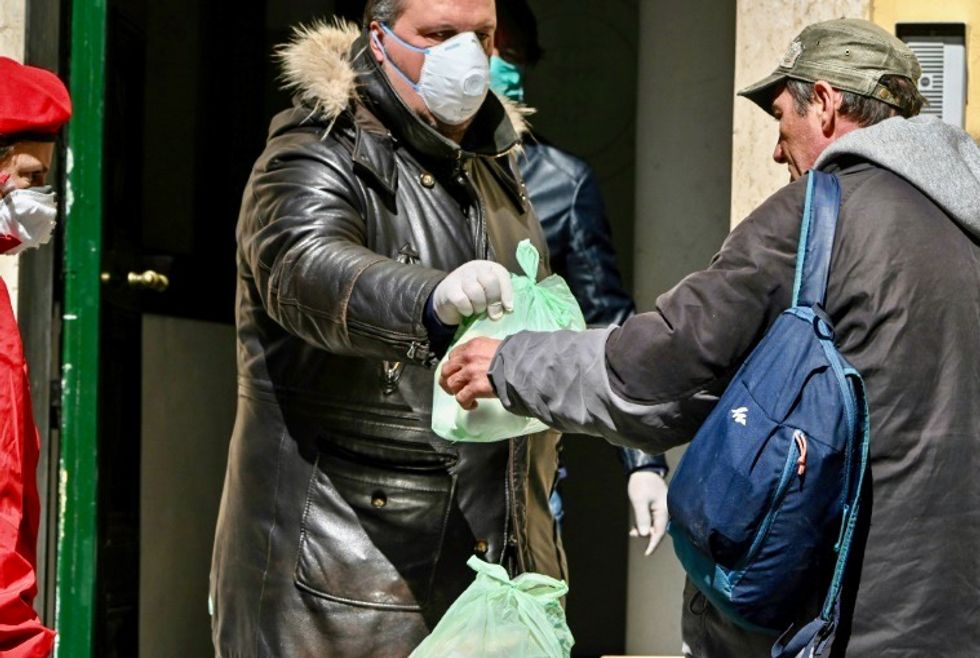 Within 10 minutes, all the food was gone.

For years, the Ronda della Solidarieta (Solidarity Patrol) charity has served up free dinners twice a week for Rome's needy, passed out at twilight in the shadow of the city's ancient ruins.

But as Italy begins to feel the effects of its most punishing economic crisis since World War II, triggered by the coronavirus pandemic, the number of those in need has shot up.

On one recent evening, a large crowd pressed forward for the 130 bags of food handed out by volunteers, watched over by Red Cross workers.

An undercurrent of desperation hung in the air despite the setting sun and idyllic backdrop, and some people left disappointed, arriving too late for a bag of their own.

Among the crowd were new faces unaccustomed to asking for help. One, who gave her name as Anna, said she had travelled across town for the food.

Unable to work as a cleaner during Italy's two-month lockdown, she has skimped on meals to pay rent on her shared apartment.

"I come here from time to time now when it's hard," she said in a barely audible voice. "I'm ashamed about it, though."

Anna is just one among a new class of poor that has developed seemingly overnight in a country that, even before the epidemic struck in late February, was struggling with a sickly economy, over nine-percent unemployment and vast inequality.

The problem is global. Earlier this month, the charity Oxfam estimated that half a billion people around the world could be driven into poverty by the virus crisis.

Elsewhere in Europe, Spain plans to roll out a basic income to combat new poverty, while in Britain, nearly one million people -- 10 times the average -- applied during two weeks of April for the government's main form of state aid.

In the United States, tens of millions of people have lost their jobs.

But to many in Italy, economic hardship feels like a double punishment.

More than 30,000 people have died from COVID-19 -- one of the highest tolls on the planet -- while Italians have displayed notable solidarity during the crisis.

La Repubblica daily has estimated that 11.5 million Italians, half the official workforce, have stopped receiving income and started applying for aid.

Last month, the Organisation for Economic Cooperation and Development forecast that 27 percent of Italians could fall into poverty were they to forgo three months of income, in a report based on 2018 data.

Prime Minister Giuseppe Conte, who has spoken of the "acute suffering" of many Italians, in March set aside 400 million euros ($430 million) just for food stamps.

"We don't want to leave anyone behind, left to fend for themselves," Conte said in a televised address in March.

But many have been.

Among those swelling bread lines across the country are former cooks, cleaners or shop assistants who lost their jobs after a nationwide quarantine was imposed more than two months ago.

Some never had fixed employment but got by working odd jobs, or in the informal economy. Others were professionals.

Declining savings rates mean the vast majority of Italians don't have a nest egg to fall back on.

"I'm mortified," said Maria Loprete, 65, who worked for 30 years at Milan's La Scala, latterly in the cloakroom, before the internationally renowned opera ceased activity in February.

Before the pandemic struck, Loprete volunteered with a church organisation to help the homeless.

"Now I've found myself in the same situation as these people who need help," she said.

The charity, which operates nationwide and says requests for help are up 114 percent, issues cards with "points" to use for items like oil and sugar, tuna and tinned tomatoes, pasta or laundry soap.

With her widow's pension going towards rent, Loprete relied on her La Scala salary for food, with 60 euros a month going towards medicine.

While she misses the little luxuries she once allowed herself, whether bubble bath or a new T-shirt, what's hardest now to manage is her sense of pride.

"I've always said, 'Gosh, how do they feel?'" Loprete told AFP, speaking about the people she helped as a volunteer.

"And it's the same pain, now I'm feeling it. It affects your dignity as a human being."

Also shopping at the Caritas market on a recent afternoon was Antonio DiGregorio, 64, who was laid off a year ago as a cook but managed to make ends meet transporting seniors and the disabled to appointments.

"I don't get to the end of the month. Even at the middle of the month there's nothing," said DiGregorio, who supports a nine-year-old daughter on the monthly 400 euros he receives under Italy's welfare system for its poorest.

The so-called citizen's income was considered revolutionary when introduced more than a year ago by the anti-establishment Five Star Movement, although it differs little from unemployment benefit schemes in many European countries.

AFP / MIGUEL MEDINA Unemployed Antonio DiGregorio, 64, worries about the competition for jobs with droves out of work

Currently about one million families qualify for it, receiving up to 6,000 euros a year, but the government is considering reforms that would expand the number of eligible people.

DiGregorio's biggest worry now is increased competition for jobs given the droves of unemployed.

But the wider social impact also concerns him.

Already, he says, he has seen people shopping in Milan grocery stores rushing for the door without paying, a phenomenon also reported in Italy's south.

Businesses "have to start up again because if we’re stuck another month, we'll have civil war," DiGregorio warned.

- 'No one's throwing anything away' -

Before the coronavirus crisis, Italy had about 1.8 million households, or about five million individuals, living in absolute poverty, unable to cover basic necessities, according to national statistics bureau Istat, based on 2018 data.

Most of the poor are in the south. Poverty also falls disproportionately on immigrants, 30 percent of whom live in absolute poverty, Istat found.

Some nine million people are considered in "relative poverty", with incomes 50 percent or more below the national median.

Before the lockdown, the Nonna Roma association helped 300 Roman families with food and other necessities.

AFP/File / Filippo MONTEFORTE Rome's mayor says more than 60,000 food stamps have been distributed, but La Repubblica reports that the number of requests is much higher

The number of requests has now swelled to nearly 4,000, its president, Alberto Campailla, told AFP.

"The make-up has changed," Campailla said.

"It's not only those families in absolute poverty, but also people now who maybe were working under the table, who were self-employed, young professionals, and then so many migrants. All these people have no work."

Each weekend, the group's volunteers drop off boxes filled with staples, along with fresh fruit and vegetables and a cake, to people requesting help.

Many of those interviewed by AFP said they were still waiting for food stamps from the city which enable a family to obtain up to 100 euros' worth of groceries a week.

Rome's mayor has said more than 60,000 have been distributed, but La Repubblica reported on Wednesday that requests numbered 161,000.

Receiving her food package, Filipino maid Marie-Therese said most people in her building of working age had lost their jobs.

Although times are hard, she said that at least her family was "safe, not sick".

Worse off, she said, were the homeless in her area who continue to rummage in vain through rubbish bins.

"Now they can't find anything," she said. "No one's throwing anything away."