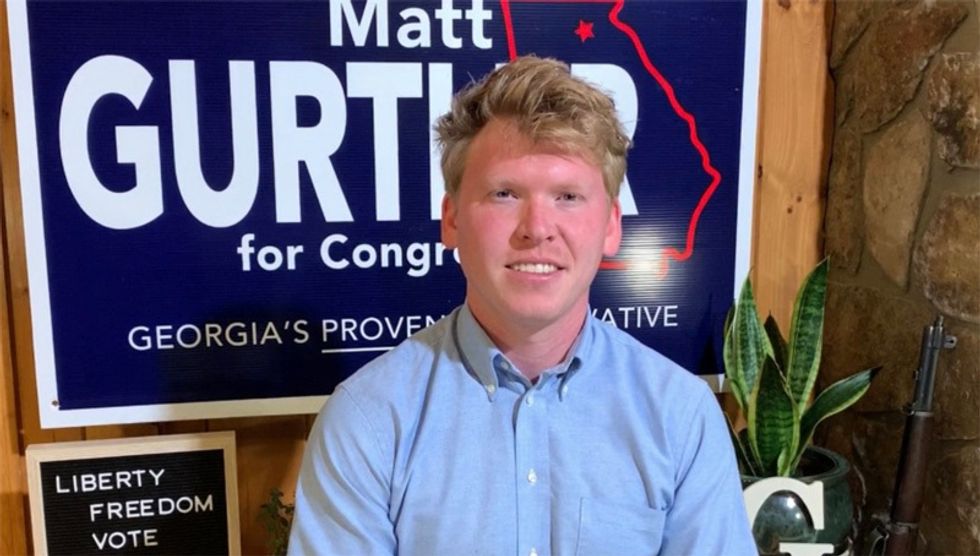 On Saturday, the Atlanta Journal-Constitution reported that a photo is circulating of Rep. Matt Gurtler, the GOP state representative running for the seat held by Rep. Doug Collins, with a white supremacist leader.

"The photo shows Rep. Matt Gurtler, R-Tiger, with Chester Doles, a Georgia man with longstanding ties to numerous white supremacist organizations, including the National Alliance and Hammerskins, a racist skinhead gang," reported Chris Joyner and Tia Mitchell. "It was taken earlier this year at a meeting of American Patriots USA, a group founded by Doles last year in an attempt to appeal to more mainstream conservatives in the region. Other candidates for office in Georgia also appeared in the photograph with Doles, though none as high profile as Gurtler."

In an email to AJC, Gurtler did not back down, saying, “I was asked by a voter to speak to a pro-gun, conservative group that supports President Trump. There was a group picture with all the candidates and speakers.”

But Gurtler is now facing criticism from his own party. “As a Christian, I’m repulsed by bigotry and hatred in all forms, and racism has no place in our state or in the 9th District,” said fellow GOP state Rep. Kevin Tanner. “North Georgians are decent, faithful and hard-working people. They deserve elected leaders who reflect that, not those who would embarrass us with their poor judgment.”

Collins is vacating his safely red congressional seat to challenge Sen. Kelly Loeffler, who has been mired in scandal over her stock trades of companies affected by coronavirus while receiving classified briefings on the pandemic.