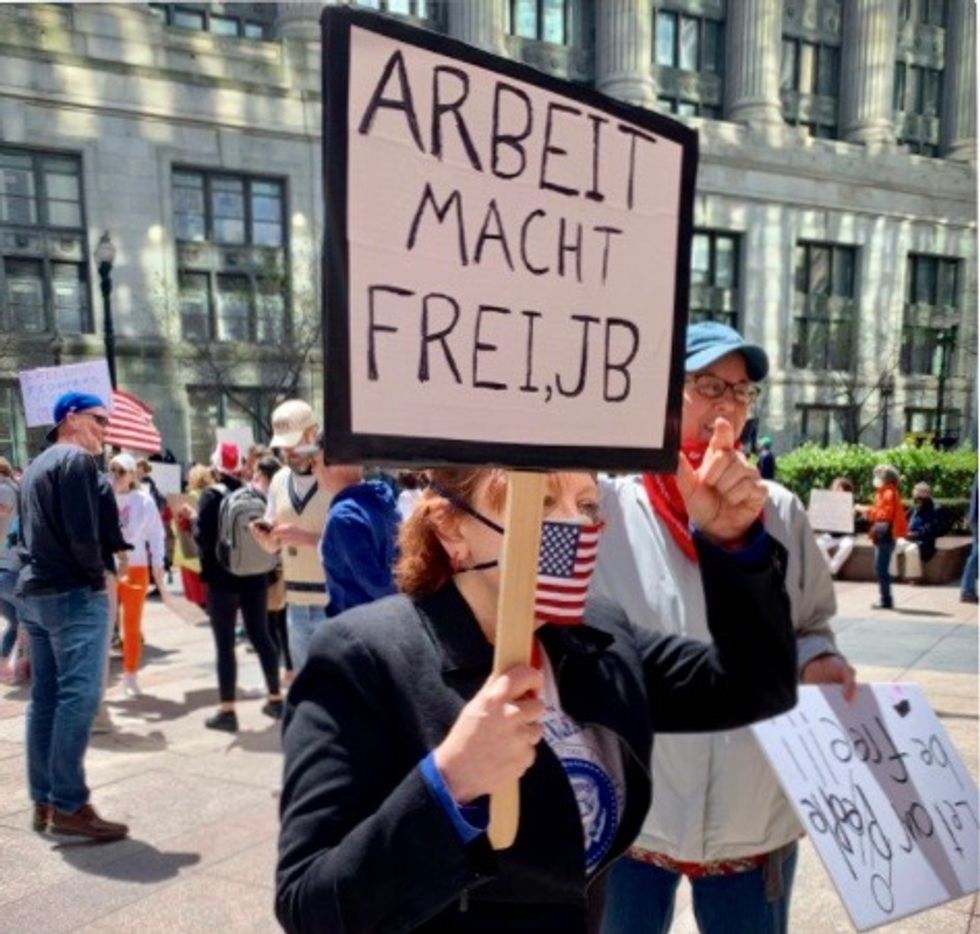 Amongst the hundreds of Friday afternoon protestors opposing the extension of Illinois Governor JB Pritzker’s stay-at-home order were two with anti-Semitic ones: one sign read, "Heil, Pritzker" with a large swastika next to it, and another read, “Arbeit Macht Frei,” the German phrase for "Work Makes You Free," which appeared over the entrance to Auschwitz and other Nazi death camps.

These signs were all the more ominous seeing as Pritzker is Jewish.

Considering the far-right's interest in white supremacy and nationalism, it's not really surprising to see far-right protestors embracing Nazi slogans and symbols. Nor is it surprising to hear that yesterday's protestors outside of the state's capitol building in Springfield largely disregarded facial masks and social distancing guidelines meant to slow the spread of coronavirus.

That's all the more troubling when you realize that Illinois is the fourth U.S. state with the highest number of coronavirus cases (56,055) and deaths (2,457). The state had its highest number of new cases (3,137) on Friday, the same day the protest occurred.

Jackie Fletcher, the woman holding the swastika sign, told her local NBC news affiliate that she had "Re-Open Illinois" written on the other side of her sign because “some people get touchy about swastikas.”

“I’m here to protest the loss of our rights,” she continued. “We’re protesting for our First Amendment and other things. Our speech isn’t really being prohibited, but our freedom is. We’re unable to leave the house and have to wear a mask.”

Yes, you know those Nazis and their love of facial masks and making people stay at home for public health reasons: apples to apples.

The Nazi signs are just the latest escalation in right-wing anti-quarantine protests. On Thursday, armed Michigan right-wing extremists carrying firearms took over the Michigan Statehouse in an armed occupation that largely lacked face masks and social distancing as well.

There are many reasons to want to re-open state businesses despite the pandemic. Recognizing the ongoing epidemic's economic devastation, Democratic and Republican governors alike have begun gradual re-openings of their states. But the protestors are overwhelmingly white and the Nazi symbols and firearms carry violent overtones meant to warn any "outsiders" who oppose their desire to "go back to normal" as quickly as possible, even if it kills us.

A few Things about these Illinois Nazi signs, which attack Governor Pritzker for trying to save lives: #1 This mor… https://t.co/VuvileEBXO
— Mrs. Krassenstein (@Mrs. Krassenstein) 1588422916.0

J.B. Pritzker may not be the best governor but this is fucking DISGUSTING. Comparing a Jewish man to Hitler is abou… https://t.co/loNofcdQk7
— samantha (@samantha) 1588389870.0