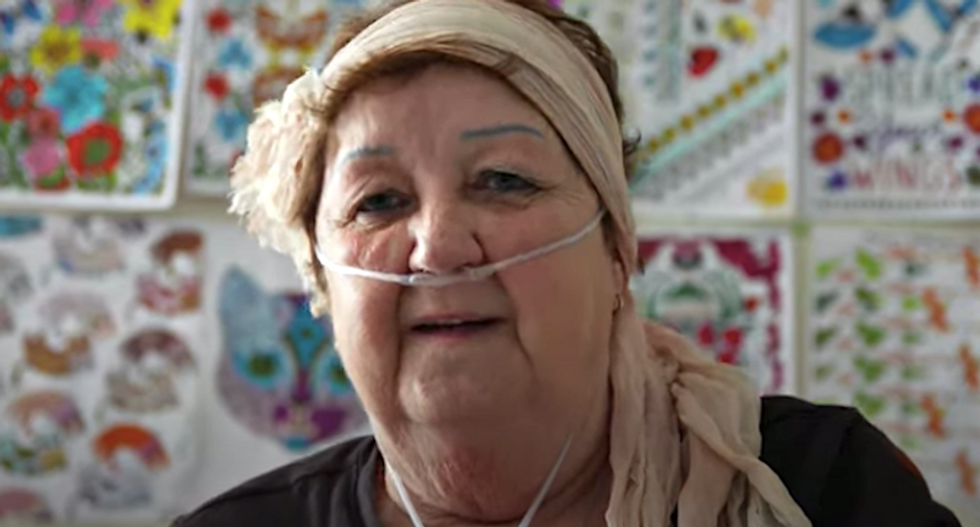 On Tuesday, both the pro- and anti-choice world were rocked by a revelation that undermines literal decades of religious right nonsense. Norma McCorvey, the "Jane Roe" of the Supreme Court case that legalized abortion nationwide in 1973, claimed before her 2017 death that her famous "conversion" to anti-abortion activism was a con job.

McCorvey told filmmaker Nick Sweeney during the taping of his new FX documentary, "AKA Jane Roe," "I took their money, and they took me out in front of the cameras and told me what to say."

For pro-choice activists, the revelation was less exciting than frustrating. For decades, the anti-abortion movement has held out McCorvey's "conversion" as a morality tale about how women, deep down inside, really don't want access to abortion, but instead are being deceived by a supposedly ruthless "abortion industry."

McCorvey was a prop in service of this argument, which depends on sexist stereotypes painting women as too feeble-minded and gullible to be the proper stewards of their own lives. Her tale of woe, where she was fooled into thinking abortion was a right, until she was "saved" by anti-choice ministers like Flip Benham, was all about serving this narrative: Women can't be trusted with autonomy, and need "godly" men to guide them.

(Benham, a supposedly wise and "pro-life" guidance-giver to women, has been seen in recent months violating coronavirus restrictions in order to harass patients and staff at a North Carolina clinic, even though doing so directly threatens to spread a deadly disease among the protesters, clinic staff and the pregnant people seeking care.)

Having spent years covering the pro-choice movement, I can safely say that the widespread view in pro-choice circles of McCorvey's "conversion" was one of skepticism. Frankly, she was a sketchy character and that was no secret. She admitted to lying about being raped, even though the pro-choice lawyers who argued Roe had no interest in making the case about rape. McCorvey publicly waged war on Sarah Weddington, the pro-choice lawyer who argued the Roe case before the Supreme Court, apparently furious that Weddington didn't try to help her get an illegal abortion during the run-up to Roe. McCorvey didn't seem to care that if Weddington had committed a crime on her behalf, it could have ended a case that granted millions of women the right to an abortion without the threat of jail.

So yeah, pro-choicers always suspected McCorvey was getting paid off somehow, and the number that Sweeney uncovers — nearly half a million dollars over the years — sounds about right.

But the main reason pro-choicers suspected the McCorvey conversion was a sham wasn't about McCorvey's character, but about the dynamics of the anti-choice movement in general. It's no exaggeration to say that the anti-choice movement, from tip to toe, is stuffed with liars and grifters. Their entire raison d'être is telling lies — often over-the-top, melodramatic lies — in service of sticking it to women, LGBT people and liberals in general for not respecting the "right" of the religious right to dominate the rest of us.

The anti-choice movement has always been run by lying trolls, and always will be. They set the template for the rest of the conservative movement, and paved the way for the rise of Donald Trump, whose presidential victory was a perfect summary of the fact that right-wing American politics has become one big, long con.

The over-the-top, theatrical lies of the anti-choice movement are so comical that the mainstream media, for decades, has shied away from covering them too closely, likely out of fear that they're actually too ridiculous to be believed.

For instance, over the past few years anti-choice activists have begun to claim that doctors deliver viable infants alive and let them die. Trump likes to tell this story with vivid and completely made-up details about swaddling a baby in blankets before murdering it. The Senate held hearings in which anti-choice activist Jill Stanek — a crazed, racist liar who also claims Chinese people think aborted fetuses are a "delicacy" — claimed, almost certainly falsely, that she once witnessed a baby being killed this way. (Stanek has also argued that contraception bans are necessary to force people to have sex only within marriage.)

To bolster this argument, the anti-choice movement also trots out a series of people who claim to have "survived" abortion. Did they? Probably not! The procedures they describe have no relationship to actual methods used to terminate pregnancies in the real world. Anti-choice "testimony" is all to often as McCorvey described it: "[T]hey took me out in front of the cameras and told me what to say."

But this "born alive" mania has mostly been ignored by the mainstream media, except for occasional gawking at Trump's weird rally stories. I suspect that happens because these tales are so grotesque and improbable that journalists fear their audiences will think they made it all up. Instead, anti-choice activists get a glow-up in mainstream coverage, presented as less hysterical and less prone to lies and bizarre flights of fancy than they actually are.

The "baby parts" debacle from a few years ago is another example of how the anti-choice movement is not a group sober-minded devout Christians who just love "life," but in fact a bunch of fanatics who have contempt for the truth and think nothing of spinning wild stories and engaging in implausible thought-experiments in their efforts to smear feminists.

A series of "undercover" videos purporting to "prove" that clinics like Planned Parenthood were secretly selling "baby parts" out the back door were released by an anti-choice activist named David Daleiden in 2015. To anyone familiar with the anti-choice movement and their reliance on fantastical stories, it was obvious this would turn out to be bullshit, but too many mainstream media organizations ran credulous stories, bamboozled by their own decades of coverage falsely painting anti-choicers as serious-minded people instead of fundamentalist whackadoodles.

Sure enough, after the first round of credulous coverage, the facts started to emerge: Planned Parenthood doesn't sell baby parts." They donate fetal tissue to clinics that use it for medical research — research that saves far more lives than any nut waving a bloody fetus poster board has ever saved. The videos had been altered to make innocent people look guilty. Eventually, Planned Parenthood won a lawsuit against Daleiden and he was arrested for counterfeiting government documents.

This myth of the humble, righteous anti-choice activist works its way not just into the media but into Supreme Court cases, such as one in 2014 case, when anti-choice activists argued against an anti-protest buffer zone around clinics by claiming they were merely "sidewalk counselors" trying to "help" women.

An investigation by Jill Filipovic at Cosmopolitan exposed the truth: They're a bunch of bullies who are angry at women for having sex and show up at clinics to harass them.

"If women want careers and education and everything and they don't want children," one protester complained to Filipovic, "what are they doing having sex?"

Another complained that "there were no problems" back when women "had to be obedient to their husbands."

Instead of contraception, a protester argued, "the way to control [pregnancy] is not to hop into bed with every Tom, Dick, and Harry."

The court sided with the bullies, unsurprisingly, elevating the myth that these belligerent protesters merely wished to "counsel" women.

Anti-choicers have long pushed this myth that they're righteous warriors going up against a sleazy "abortion industry" and trying to "save" women. This is pure projection on their part, and a complete inversion of reality.

The press should stop being fooled by the way anti-choicers hide behind the Bible and the cross and see them for who they are: Bullies who are trying to take important medical care away from women at a vulnerable moment in their lives. Perhaps the revelation that anti-choicers literally bought off Norma McCorvey and paid her to lie will help open up some eyes.

But it's also important to step back and take a look at the bigger picture. Roe v. Wade was never about Norma McCorvey. She was simply the plaintiff recruited for a case that was actually about the rights of millions of people who have faced or will face a pregnancy they don't want or can't bring to term, for whatever reason. By recruiting McCorvey to their side, anti-choice activists sought to erase the existence of these millions of people who have been saved by access to safe, legal abortion. It's a shame that McCorvey betrayed all those people for so long. But at least before she died, she told the truth.