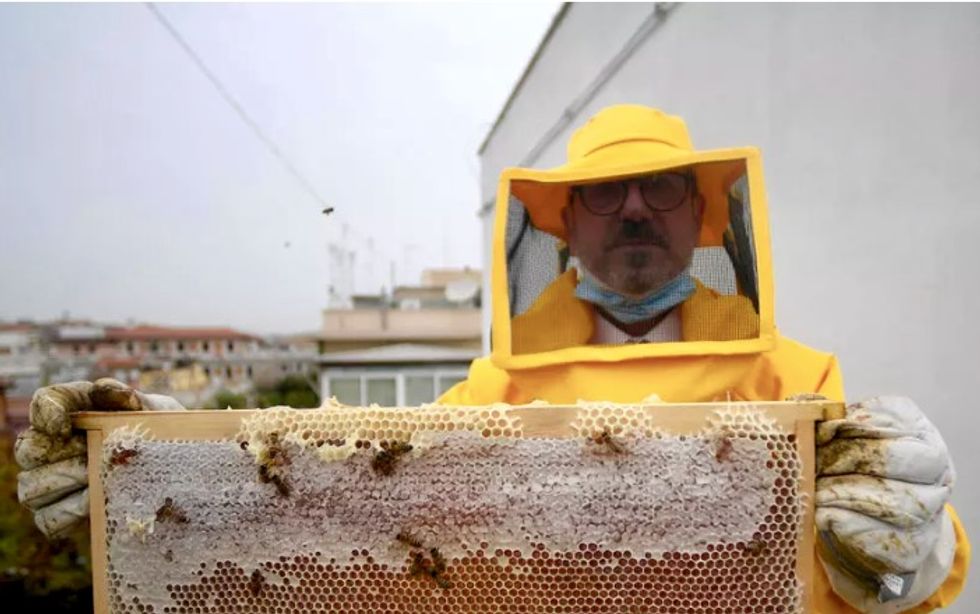 A beekeeper from the forestry unit of the carabinieri, or military police force, shows alveolus and bees on the rooftop of the command's headquarters in Rome Filippo MONTEFORTE AFP

While most Romans found Italy's coronavirus quarantine a real buzz kill, the city's bees had a field day.

Even as Rome endured a recently ended two-month lockdown, some lucky bees residing in hives atop the headquarters of Italy's forestry unit were thriving.

For three years, members of the carabinieri -- the military police force, charged with protecting forests and the environment -- have been tracking the approximately 150,000 bees living in three hives on the roof.

The coronavirus epidemic offered a unique opportunity for research, as traffic, pollution and noise in the sprawling city virtually stopped overnight in early March after a nationwide quarantine was ordered.

How would the bees react?

"We see they've been more numerous and healthy, and those are indications of the nutrition they've been getting," he added.

The quality of the bees' honey has visibly improved, Cirone said.

Tests show that the bees have been sampling 150 different flowers in the area, compared with the 100 varieties seen before the lockdown.

Lack of air pollution means the bees have been able to smell the flowers that attract them from 2 kilometers (1.2 miles) away, double the normal distance, he said.

There are an estimated 1,000 to 2,000 hives in Rome, and the city's bees were already happier than their comrades in the countryside, said Cirone, where bees must contend with toxic chemical products used in agricultural production.

On Thursday, two carabinieri beekeepers wearing gloves, hats, veils and bright yellow protective jackets over their uniforms -- with their distinctive red-striped trousers -- showed off their bees with hive smokers in hand.

One of them, Corporal Gianluca Filoni, said the bees had grown on him after their time together.

"I'm not crazy about insects but now I like them," Filoni said, as he showed off a honey and wax-encrusted frame covered by hundreds of bees.

The queen, who had been out of sight, suddenly came into view.

"There she is!" exclaimed Filoni, before the queen bee buried her way into a new hiding place. "She doesn't like to be exposed."

Cirone of the beekeeping federation said his initiation into apiculture began at age six, when his uncle brought him along to watch him take care of his hives, instructing him to stay very still and quiet.

It's a memory that still brings shivers, Cirone said.

"It was like going into the lion's den and coming out unharmed," said this bee lover, who even sports bees on his tie.

The bee-studying project, managed by Lieutenant Colonel Nicola Giordano of the forestry and environment unit command, includes about 30 other groups in Italy's capital sharing information about their bees.

The data from the two-month quarantine period is expected to be ready by summer.

Giordano said it was not incongruent for the carabinieri to be paying attention to the tiny, honey-making insects.

"It might seem strange but seeing as our institutional mission is the environment, to not take into account the bees, the pollinators, would mean we're not paying attention to biological complexity which is fundamental to our planet," Giordano said.

The bee-tracking project, he added, was called "Sentinels of nature."

Making honey is not really the point, he said, but still the hives produce about 30 kilograms (65 pounds) of honey.