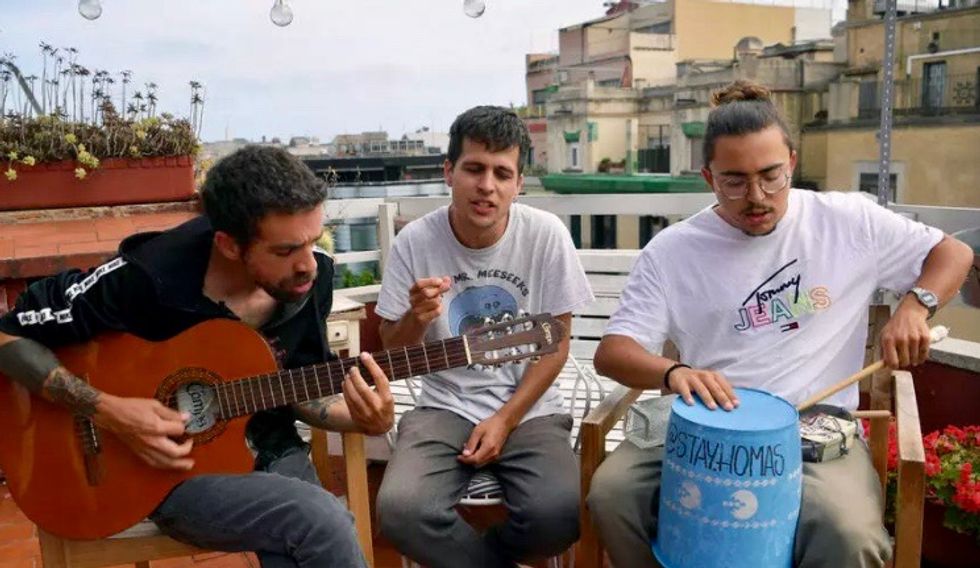 When the epidemic hit, they were just three musicians stuck at home who started larking around on their terrace with a guitar and a bin in the hope of livening up lockdown.

But two months and 27 songs later, the Barcelona trio has become a rooftop sensation, their catchy tunes in a mix of Spanish, Catalan and English winning them an impressive following online -- and a contract with Sony.

Known as the "Stay Homas", Klaus, Rai and Guillem now have 400,000 followers on Instagram, Michael Buble has covered one of their songs and they have collaborated with Manu Chao and Pablo Alborán.

And their first album will be out this autumn.

"Not in a hundred lifetimes would I have ever believed this was going to happen to us. That Sony would come knocking because they like the songs we make on our rooftop with a guitar and a metal rubbish bin," Guillem Bolto, 25, told AFP at their flat.

Since the start of the year, the three have shared an attic flat in Barcelona whose hallway is now full of beers and freebies sent in by brands whose products appear in their videos.

They play in two local bands: Bolto sings and plays trombone in one, while Klaus Stroink, 25, plays trumpet in another with 28-year-old bass player Rai Benet.

But they never wrote anything together until the March 14 lockdown when they found themselves at a loose end while having a beer in the sun on the roof in Barcelona's Ensanche neighbourhood.

"Rai started playing bossanova-style and mucking around and we started to put together a song which we recorded and put online," explains Bolto sitting on the terrace next to pots of cacti.

It was a hit, so the next day they recorded another called "Stay Homa" which they took as their name. Another followed and then another.

At first, they were recording every day in what they named their "Confination Songs".

"It was out of our hands pretty quickly because people were more and more enthusiastic which really motivated us. Suddenly it just exploded," Bolto said.

And over the past two months, they've touched on everything from reggae to folk, flamenco to trap, always in a lighthearted manner and with a sense of humour.

The idea was to "give a sort of positive message which says OK, this is a shitty situation but let's try and find some good in it," says Stroink

With all the restrictions, it has been a barebones project, they say, making music "on the cheap" with whatever was lying around the house -- a cardboard box, an empty gin bottle, a metal wastepaper bin, a spatula.

"Very little has been planned in this project," admits Stroink.

"We're using a bin because we don't have drums, if we had drums we'd play them. For the first three weeks we only had one drumstick."

Their tunes have drawn many collaborators who record themselves at home -- then send their video which is shown on a mobile phone as the trio performs their latest song.

Even so, it took them a while to set up a website and a social media profile -- because they worried they wouldn't have any followers.

But it's a bitter-sweet feeling, coming at a bad moment for the music industry with so many people out of work.

And the sudden fame is "a bit overwhelming", Stroink says.

"I'm doing just fine with my friends, with my people and I don't want that to change.