'I'm dying to go back to Church': Kayleigh McEnany under fire for claim reporters 'desperately' don't want churches to re-open 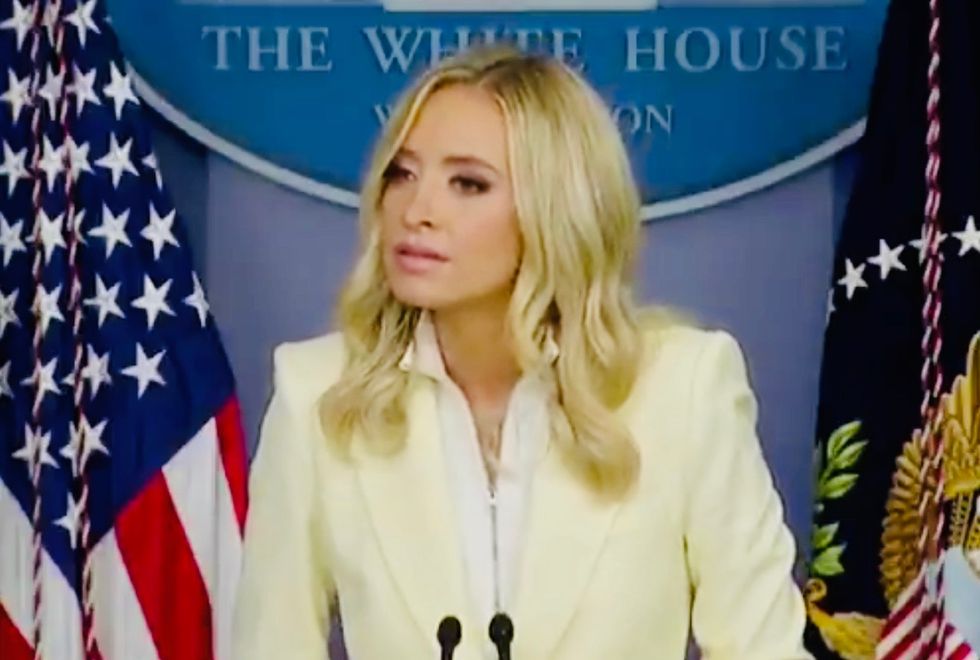 White House Press Secretary Kayleigh McEnany is under fire from reporters and others after a journalist asked her a simple question about President Donald Trump's demand that governors allow churches and other houses of worship to open "right now."

President Trump does not have the legal authority to make that demand.

A CBS News reporter asked McEnany if President Trump supports churches who have been defying orders of the governors in their states to not re-open.

McEnany would not answer the reporter's question, instead saying President Trump has "been very clear. He wants churches to re-open, he wants them to do it safely."

"If the governor does not allow that," the reporter pushed, "does he support those churches defying the governor's orders?"

"The answer is 'yes'?" the reporter pressed.

"I just gave you an answer," McEnany claimed. She then again repeated her canned statement.

"What provision of federal law allows the president to override the governors?" the reporter asked.

"The president will strongly encourage the governors to allow their churches to re-open," McEnany again repeated. She then said, "Boy, it's interesting to be in a room that desperately wants to seem to see these churches and houses of worship stay closed."

She then pointed to Reuters' Jeff Mason.

"Kayleigh, I object to that," Mason replied. "I mean, I go to church. I'm dying to go back to church. The question that we're asking you, and would like to have asked the President and Dr. Birx, is, 'Is it safe?' And if it's not safe, is the President trying to encourage that or does the President agree with Dr. Birx that people should wait?"

"Jeff, it is safe to re-open your churches, if you do so in accordance with the guidelines," McEnany, who is not a physician, immunologist, epidemiologist, or scientist, replied.

She once again twisted the interaction into suggesting that President Trump deserves their praise.

"I am thankful that we have a President that celebrates the First Amendment, the same Amendment that gives you all the ability to ask me questions, is there to have the freedom of worship."

Other journalists weighed it.

Big shout out to @jeffmason1 for pushing back against McEnany's insinuations that reporters don't want churches to… https://t.co/zRqxt6PUK3
— Grace Segers (@Grace Segers) 1590172143.0

The lawyer for conspiracy theorist Alex Jones called for a mistrial in his defamation damages trial on Thursday after inadvertently sending a trove of cell phone data to the attorney representing the family of one of the Sandy Hook parents.

But Travis County District Judge Maya Guerra Gamble denied the request, saying "I don't think it's a mistrial based on this," according to a report from Business Insider.

Matt Schlapp, the founder of the Conservative Political Action Conference, said this week that he is being called a racist for allowing Hungary Prime Minister Viktor Orbán to speak at the event after he came out against "race mixing."

Orbán recently said that countries where races mingle are “no longer nations.”