Israel to swear in government after 500-day political crisis 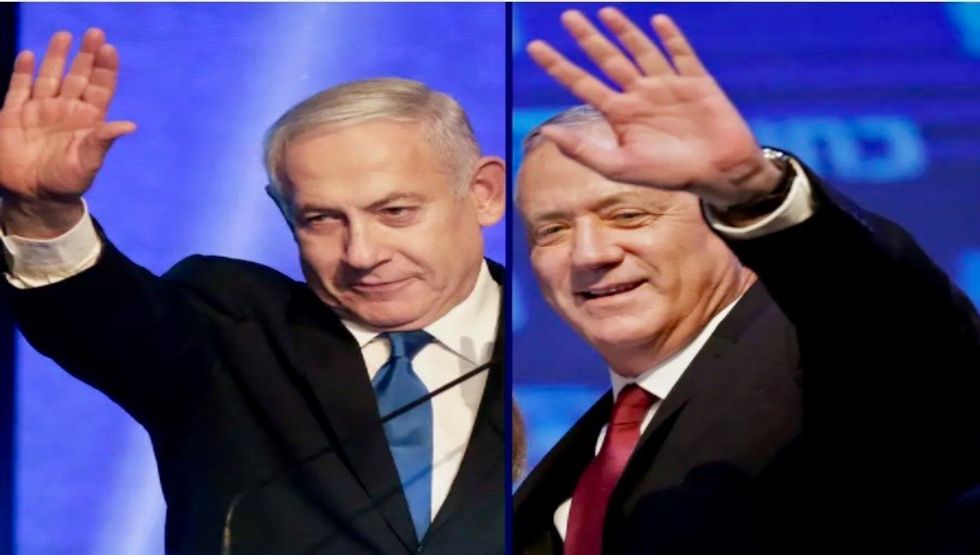 After more than 500 days of political deadlock, three inconclusive elections in a year and finally an unprecedented power-sharing deal between rivals, Israel was poised to swear in a new government on Thursday.

Through the three weeks since the pact was signed, leaders from various parties have haggled for key positions.

In a letter sent to President Reuven Rivlin late Wednesday, Netanyahu, a right-winger in power since 2009, announced the government's composition had been finalized.

Under the deal, Netanyahu will serve as prime minister for the coming 18 months, a victory for a leader due to stand trial from May 24 on corruption charges, which he denies.

Gantz will be alternate prime minister -- a new position in Israeli politics -- for the first half of the deal, before he and Netanyahu swap roles.

In an op-ed on Thursday, pro-Netanyahu paper Israel Hayom wrote the premier had signed off on his own "expiration date" after the longest tenure as prime minister in Israeli history.

The 35th government since Israel's creation in 1948 includes representatives from across the political spectrum.

Writing in the Yediot Aharonot newspaper, political columnist Ben-Dror Yemini said the coalition was "inflated" and "wasteful," pointing to the record 34 cabinet seats, a number that could grow to 36.

"It's unclear if (the government) has any ideology," he said. "It is all about seats."

The large cabinet, along with additional funds to accommodate the new position of alternate prime minister, have prompted criticism as Israel seeks to rehabilitate an economy brutalized by the coronavirus pandemic.

While the country has lifted many lockdown restrictions as transmission rates have fallen in recent weeks, rampant unemployment caused by the pandemic remains an urgent concern.

Policy "guidelines" submitted by Netanyahu on Wednesday said the new government will build "a plan to exit the deep economic crisis."

The Netanyahu-Gantz deal says the government can from July 1 initiate moves to implement US President Donald Trump's controversial peace plan for the Israeli-Palestinian conflict.

The plan, categorically rejected by the Palestinians, gives the green light from Washington for Israel to annex Jewish settlements and other strategic territory in the occupied West Bank.

Such moves by Israel will likely cause international uproar and risk inflaming tensions in the restive West Bank, home to nearly three million Palestinians and some 400,000 Israelis living in settlements considered illegal under international law.

The government's guidelines make no mention of annexation plans, but commit it to "strengthen national security and to strive for peace".

Bennett, a hardline promoter of annexation and the expansion of West Bank settlements, will be replaced by Gantz at the defence ministry.

Jordan's Foreign Minister Ayman Safadi said Wednesday that "any Israeli decision to annex the settlements, the Jordan Valley and the north of the Dead Sea in occupied Palestine will be a disastrous step".

In a phone conversation with Spain's foreign minister, Safadi warned that it would "kill chances for a just peace and push the region towards more conflict".

One reporter sent out an urgent warning after former President Donald Trump posted what may be his most bizarre, QAnon-related, and conspiracy-laden video yet on his Truth Social platform.

The video was "re-truthed" by Trump on Thursday evening, and as The Daily Beast political reporter Will Sommer noted, the imagery was "filled with overt QAnon memes," and that the former president was really "stepping his QAnon outreach."

A man who has fled his home country of Russia this week delivered a scathing portrait of Russian President Vladimir Putin's leadership in an interview with The Atlantic.

The man in question, a 38-year-old IT manager named Anton Shalaev, escaped from Russia this week to the Armenian capitol of Yerevan, which is one of the few places that will still allow Russians into the country.

‘Depraved’: Rick Scott’s NRSC slammed over fundraiser asking GOP voters ‘Where do you want to send illegal immigrants next?’

U.S. Senator Rick Scott (R-FL) and his NRSC are once again under fire, this time for sending fundraising emails to GOP voters asking, "where do you want Republicans to send illegal immigrants next?" The multiple-choice answers include "Barack Obama's House," "The White House," and "San Francisco."

Sen. Scott is the embattled head of the National Republican Senatorial Committee (NRSC), the official fundraising arm of the Senate GOP caucus. Recently he has been highly criticized by Republicans wondering why the NRSC's funding of critical Republican senate campaigns has been so poor. Earlier this month a New York Times headline read: "How a Record Cash Haul Vanished for Senate Republicans."