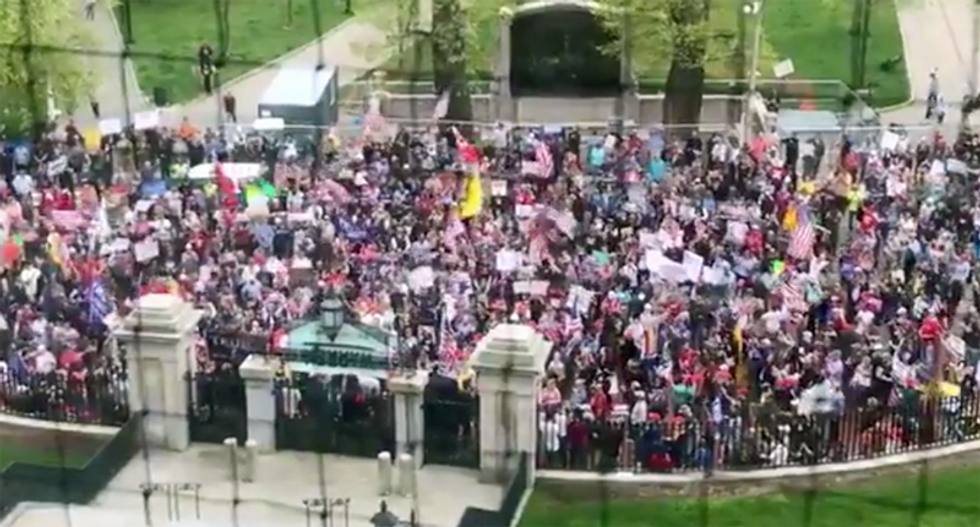 Protesters at the Massachusetts state capitol in Boston (screengrab)

Protests continue against stay-at-home orders in response to the COVID-19 pandemic.

On Saturday, a large crowd gathered at the Massachusetts state capitol in Boston to protest the shutdown order by Gov. Charlie Baker (R-MA) and Boston Mayor Marty Walsh.

Matt Stout, state house reporter for the Boston Globe, documented the protest from inside the capitol.

He reported protesters saying "this is communism" and "we don't want your shutdown anymore."

He said the crowd chanted "It's a hoax! It's a hoax!" and "It's time to make America great again.

The crowd of what appears to be hundreds of people now has spilled completely into Beacon Street outside the State… https://t.co/kimFUacG3B
— Matt Stout (@Matt Stout)1588616037.0

Before the protest, @CharlieBakerMA was asked about the objections to the restrictions and order he's put in place.… https://t.co/BgfVFQD9RI
— Matt Stout (@Matt Stout)1588618483.0

A few dozen protesters continue to linger, including one with a Ron Paul sign across the street https://t.co/o4wD6snXez
— Matt Stout (@Matt Stout)1588619568.0