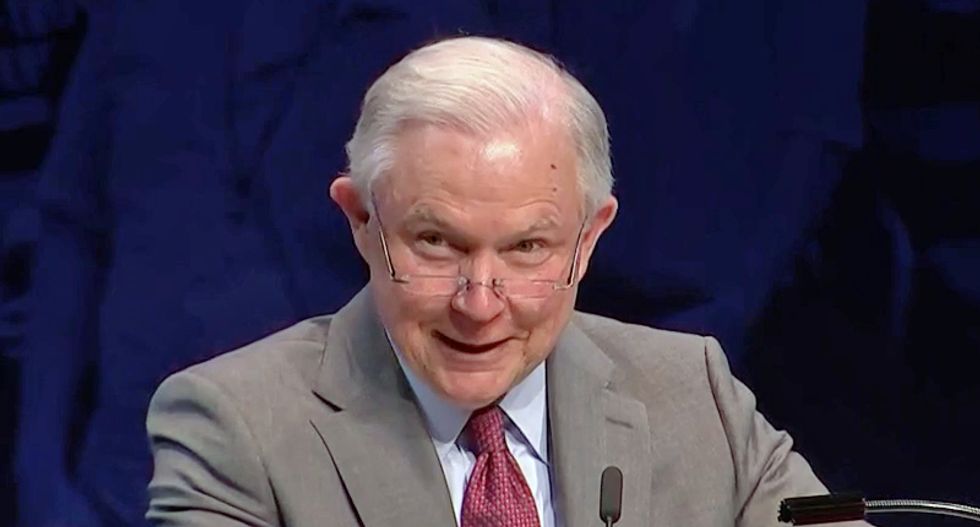 By associating with extremists known to have overtly racist and anti-Semitic views, far-right pundit Michelle Malkin has become controversial even in right-wing media. But one person who isn’t afraid to ally himself with Malkin is former U.S. Attorney General Jeff Sessions, who is hoping to win back the U.S. Senate seat in Alabama he once held and sent out a fundraising letter written by her.

According to Right Wing Watch, Malkin described Sessions as “an old friend of the America First movement.”

The America First movement, Holt notes, is a “white nationalist youth movement.” And one of the America First figures Malkin has aggressively supported is 21-year-old Nicholas Fuentes, who has a history of anti-Semitic rhetoric and is considered a Holocaust denier. Other extremists Malkin has supported include Patrick Casey, founder of the white nationalist group Identity Evrope), YouTube personality Faith Goldy and the racist V-Dare Foundation.

In her fundraising letter endorsing Sessions, Malkin writes that Sessions “will work tirelessly to deport criminal illegal aliens and stop amnesty in all forms as Americans have demanded, just like he’s done for his entire career.”

“The 2020 election cycle is crucial to the success of the America First movement,” Malkin writes in the letter. “If we do not elect candidates who will fight alongside President Trump to put America First, I fear that we may never have another opportunity to break the chokehold of the political establishment. We know that Jeff Sessions is a powerful conservative advocate with a strong and proven record who believes in the America First agenda​.​” ​

Holt points out that Malkin’s “extremism dates back years.” In 2004 — the year in which President George W. Bush was reelected — Malkin (who is of Asian descent) defended the internment of Japanese-Americans during World War II in her book, “In Defense of Internment: The Case for ‘Racial Profiling’ in World War II and the War on Terror.’”

In Alabama’s GOP senatorial primary, Sessions is competing with Tommy Tuberville, a former Auburn University football coach. The one who wins the primary will run against incumbent Democratic Sen. Doug Jones in the general election. Jones has been described as the most vulnerable Senate Democrat who is seeking reelection, but Sessions’ presence in the Alabama Senate race complicates things — as President Donald Trump still resents Sessions deeply for recusing himself from former Special Counsel Robert Mueller’s Russia investigation when he was attorney general. In Trump’s mind, Sessions worked against him during what he calls the “Russia hoax.” And Trump has stressed that he is glad he fired Sessions in November 2018 and is much happier with his current attorney general, William Barr.

As between Sessions and Tuberville, Trump would much rather see Tuberville running against Jones in the general election. However, Sessions has declined to say anything negative about Trump during his campaign and asserted that he still supports the MAGA agenda.