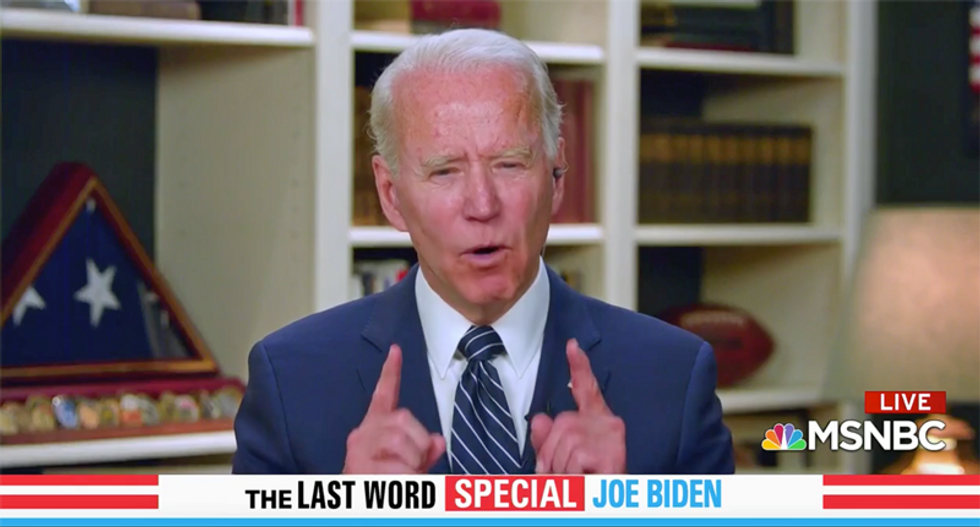 Biden was interviewed, along with Stacey Abrams, by MSNBC's Lawrence O'Donnell and also answered video questions from viewers.

Near the end of the special, Biden was asked whether he would "commit to the American ideal that no one is above the law" by refusing to pardon Donald Trump.

"The Attorney General of the United States is not the president's lawyer," Biden explained. "It's the people's lawyer."

"You remember when you were there with Pat Moynihan, we never saw anything like the prostitution of that office like we see it today," Biden continued.

"It is not something the president is entitled to do -- to direct either a prosecution and/or decide to drop a case. That is not the president's role, responsibility, and it's a dereliction of his duty," he added.

A trio of Donald Trump-backing gubernatorial candidates are flopping in their campaigns after winning their Republican primaries.

The GOP candidates in three Midwestern battleground states -- Michigan, Minnesota and Wisconsin -- are failing to attract voters or donations and running flimsy campaign operations to the dismay of fellow Republicans in the weeks ahead of November's election, and the blame is falling on the former president, reported The Daily Beast.

'I'm sorry I have to vote for him': GOP voters tell CNN they're not happy about Dr. Oz

What they found was voters were lining up behind Oz, although they didn't hide the fact that they weren't happy about it.