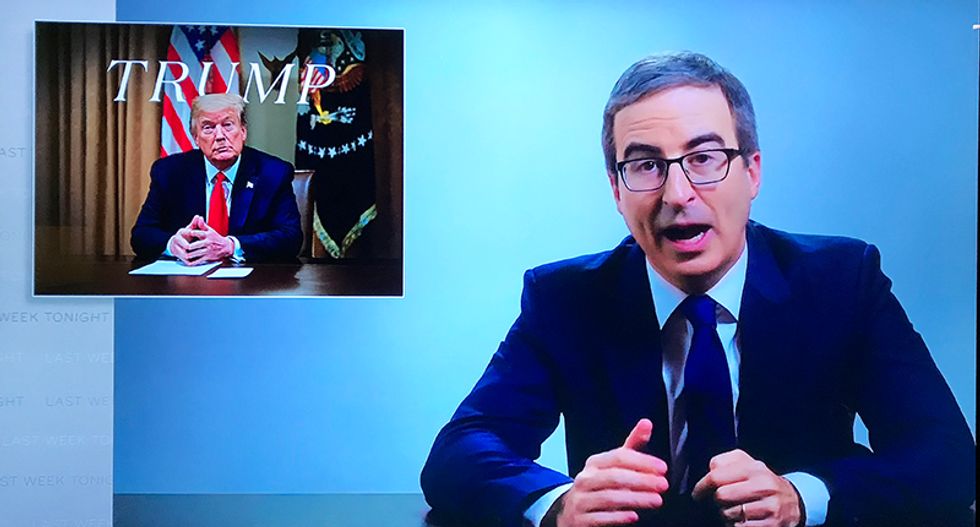 President Donald Trump has decided that Americans are all warriors in a made-up war, ready to risk their lives to die in fighting against an invisible enemy that can't be defeated without a vaccine.

John Oliver noted that everyone has now been drafted into the army whether we want to be or not, and if you have a negative view of the draft leftover from the Vietnam war, you're likely not alone. Because in the war against the coronavirus, more and more people are about to die.

That rosy picture was painted on "Last Week Tonight," Sunday, when Oliver pointed out the hilarious excuse Trump gave for not wearing a mask at the mask factory in Arizona.

"I can't help it if you didn't see me wearing one," Trump claimed.

"What are you talking about?!" exclaimed Oliver. "I can't help it if you didn't see me? Of course, you can! It's a photo-op! The whole point is to show them the thing that you were supposed to be doing. Still, I will say this: of all of Trump's ideological wavering over the years, one thing has remained consistent, he's never used protection, and he's never not been an asshol* about it afterward."

Trump's reckless behavior seems unwise, but especially after it has been discovered that at least two staffers at the White House have COVID-19. One of the people serves the first family their food, and the other is married to a top Trump aide.

The fact that this was all happening the time that Trump decided to play the Guns n' Roses song "Live and Let Die" at his mask factory rally struck Oliver.

"Unfortunately, Trump's cavalier attitude seems to be trickling down, because some states are now letting stay-at-home orders expire, even though many of them don't meet the federal guidelines suggesting they only reopen when their numbers begin to decline," said Oliver. "And while they will almost certainly put American lives at risk, Trump's new tactic is to frame that as a positive."

"All people are warriors in this country," said Trump during an Oval Office photo-op. "We're all warriors. You can be with somebody. Everything's fine. And then something happens to them personally and they all of the sudden test positive. And, uh, we're all warriors together. I am. You are. All people are."

"Oh! Are we?" asked Oliver with a twinge of sarcasm. "That's interesting because we don't actually have to be warriors here. To the extent that we are, you don't need to be throwing us into battle unarmed before we have mechanisms set up to broadly test, isolate, and trace cases of the virus. You can't just call everyone warriors and make their deaths not count. You get the sense that if God had told Trump about the flood, he wouldn't have bothered building the Ark, he would have just tried to convince the animals they're all fish. 'We're all fish together now. I'm a fish. You're a fish. We're all fish.'"

All of the talk about people being brave warriors is a ploy to get Americans to accept death.

"And yet, this administration seems to be, at times, actively hostile to those prevention methods," said Oliver. On Thursday, Americans learned that the Center for Disease Control prepared a road map for how to reopen the country safely only to have it ripped to shreds by the Trump administration and told it would never see the light of day.

So, this is where we are as a county. "A wartime president has decided that the only way to win this war is to draft everyone one of us, hide our battle plan, and hope that we're all brave enough not to notice that we've already surrendered."