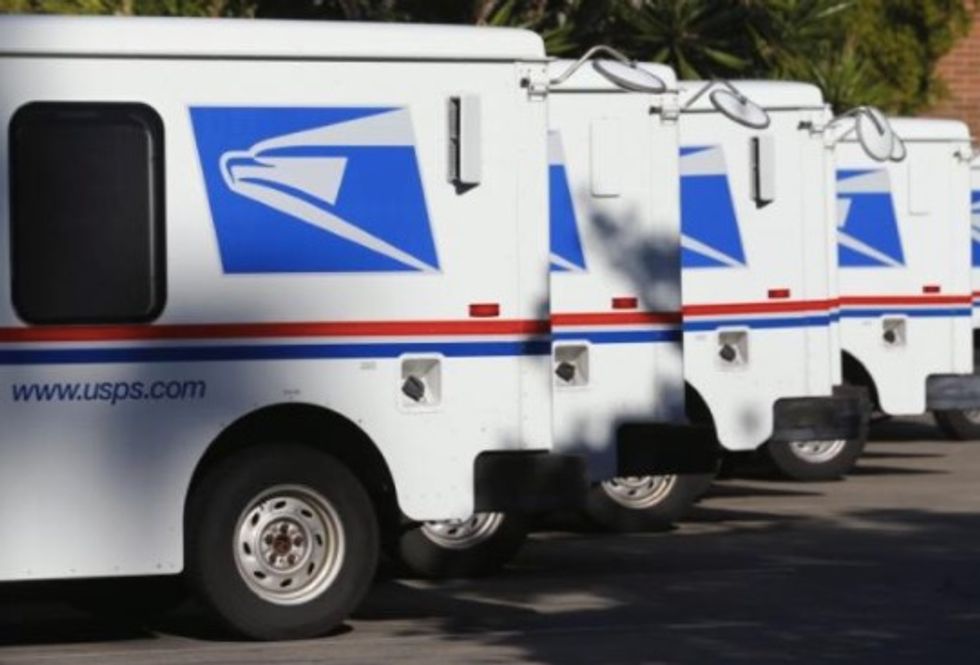 "President Trump rewards a partisan donor by installing him at the United States Postal Service. This crony doesn't cut it."

The U.S. Postal Service's Board of Governors—which is controlled by appointees of President Donald Trump—announced late Wednesday that it has unanimously selected a top Trump and GOP donor to serve as postmaster general, installing an ally of the White House to lead a popular agency that has long been a target of right-wing reforms and is currently under severe threat of collapse due to the Covid-19 crisis.

"Hard not to be cynical about the motivations for this appointment; it's an ominous sign."

In a statement, the Board of Governors touted Louis DeJoy's experience as "an accomplished business executive" in North Carolina. As the Washington Post reported, DeJoy—the head of fundraising for the Republican National Convention in Charlotte—is set to become the "first postmaster general in two decades who did not rise through the agency's ranks."

DeJoy is expected to take over as postmaster general on June 15, following the retirement of current USPS chief Megan Brennan.

Rep. Gerry Connolly (D-Va.), a vocal critic of the president's recent attacks on the USPS and refusal to provide the agency with desperately needed aid, slammed the selection of an executive and GOP donor with no experience working at the Postal Service, particularly at such a perilous moment for the nation's most popular government institution.

"President Trump rewards a partisan donor by installing him at the United States Postal Service," Connolly said in a statement. "The Postal Service is in crisis and needs real leadership and someone with knowledge of the issues. This crony doesn't cut it."

DeJoy's appointment comes as the Postal Service is struggling to weather the sharp decline in mail volume brought on by the Covid-19 pandemic. The agency's recent financial troubles have been compounded by a 2006 congressional mandate requiring it to fund its retirees' health benefits through 2056.

Last month, Postmaster General Brennan told members of Congress that USPS—which has not received federal funding for decades, running entirely on revenue from products and services—needs an infusion of $75 billion to avert financial ruin within the next several months. House Democratic leaders are reportedly pushing for $25 billion in emergency funding for the Postal Service in the next Covid-19 stimulus package.

But Trump continues to stand in the way of aid for USPS—dismissing the agency as a "joke"—and threaten to block legislation that includes any direct funding. The CARES Act, which Trump signed into law in March, contained a $10 billion loan for the Postal Service—funding that the Trump administration is reportedly holding hostage in an effort to impose long-sought changes to the agency.

"At a time when the country needs us now more than ever, [Treasury Secretary Steve] Mnuchin and his Wall Street cronies are attempting to exploit the crisis to raise prices, demonize heroic postal workers, and cut service, all so private delivery companies can profit,"  Mark Dimondstein, president of the 200,000-member American Postal Workers Union, said in a statement last month.

The collapse or privatization of the Postal Service could have disastrous and far-reaching implications, including for the prospect of nationwide vote-by-mail, which advocates say will be necessary to safely hold the November elections amid the Covid-19 pandemic.

Vanita Gupta, president and CEO of the Leadership Conference on Civil and Human Rights, tweeted late Wednesday that it is "hard not to be cynical about the motivations" behind DeJoy's appointment.

"It's an ominous sign," said Gupta. "The USPS is a public good. So many jobs especially for people of color and delivery of essential items depend on it. And our democracy (vote-by-mail, the census) amid COVID-19 depends on it."

Hard not to be cynical abt the motivations for this appointment; it’s an ominous sign. The USPS is a public good. S… https://t.co/CvDhOzwAbu
— Vanita Gupta (@Vanita Gupta)1588821389.0

In a letter to members of Congress on Wednesday, more than 100 advocacy groups urged lawmakers to "act now to save the USPS, the hundreds of thousands of jobs included in its diverse workforce, and the communities that depend upon this critical federal agency."

"A vote against adequate, timely funding for the USPS is an anti-civil rights vote," the groups wrote. "At a time where people in America need the Postal Service more than ever, we must prioritize funding to ensure that this agency has the resources it needs."