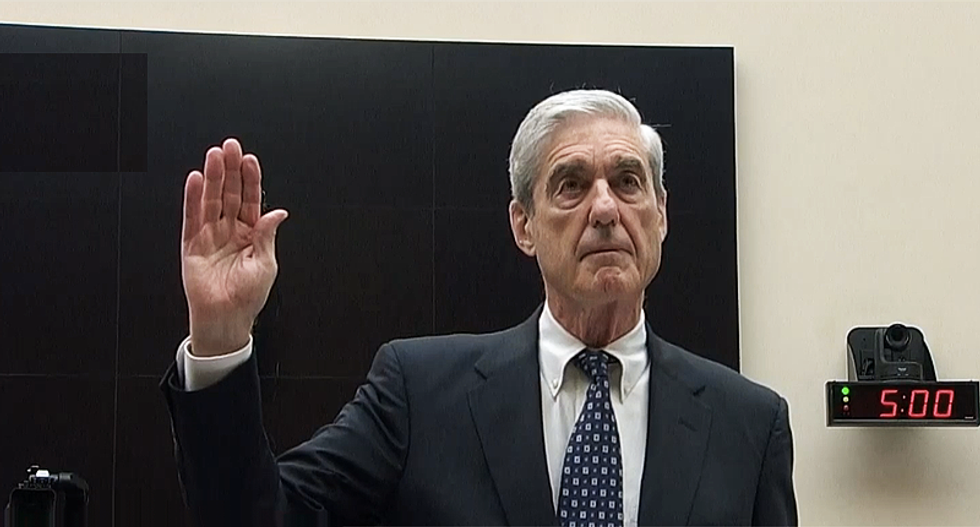 On Wednesday, Politico reported that the Department of Justice is releasing the memo that laid out the precise nature of how former special counsel Robert Mueller was tasked with investigating the Trump campaign's ties to Russia — which has long been sought by President Donald Trump's allies.

"The memo, 'The Scope of Investigation and Definition of Authority,' was sent on Aug. 2, 2017, to Mueller by Rod Rosenstein, the deputy attorney general at the time," reported Daniel Lippman and Kyle Cheney. "The unredacted bullet points include four names, beginning with former Trump campaign foreign policy adviser Carter Page. It tasks Mueller with determining whether Page committed a crime by 'colluding with Russian government officials' as they interfered in the 2016 election."

"Mueller was also tasked with investigating whether former Trump campaign manager Paul Manafort likewise colluded with the Russian government, whether he committed crimes related to his work in Ukraine, and whether he committed a crime by taking loans from a bank CEO who was pursuing a job in the Trump administration," continued the report. "The memo makes the same collusion allegation regarding former Trump campaign volunteer George Papadopolous, and also asks Mueller to look into whether he was an unregistered agent of the government of Israel."

Additionally, "The memo asks Mueller to probe four questions regarding Michael Flynn, the former Trump national security adviser who was fired less than a month into the job: whether he committed crimes by talking to Russian government officials during the Trump transition, whether he lied to the FBI about contacts he had with the Russian government, whether he failed to report foreign contacts and income on his background investigation application and whether he did not properly register as an agent for the Turkish government."

Mueller's investigation, which cast a cloud over the first half of the president's term, concluded at the beginning of last year. The special counsel concluded that several members of Trump's team were eager to accept help from the Russian government, but did not find enough evidence to prosecute a criminal conspiracy.

He also outlined ten episodes in which the president may have committed obstruction of justice, and secured convictions or pleas from a number of Trump's associates on crimes including bank fraud, tax evasion, false statements, and witness tampering.