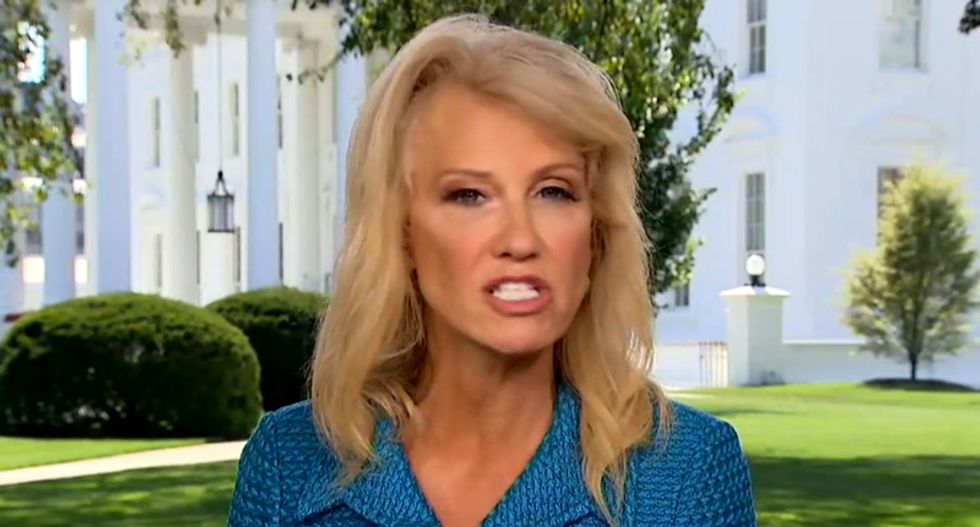 Trump White House counselor Kellyanne Conway on Tuesday was asked by the hosts of "Fox & Friends" about the prospect of Dr. Anthony Fauci testifying before Congress -- and she proceeded to fly off the handle with angry rants about Senate hearings for Supreme Court Justice Brett Kavanaugh and President Donald Trump's impeachment.

During a discussion about Fauci testifying, Conway said that she personally saw no issue with him talking to Congress in a public hearing, but then warned congressional Democrats against asking questions that might embarrass the Trump administration.

"I just hope that the people who are asking the questions are asking intelligent, rational questions that are actually relevant to the American health," she said. "Because we've seen what they do before. For example, they say stupid things like, 'This is a job interview, this is a job interview' for a lifetime appointment about Brett Kavanaugh. 'Let's believe all women!'"

Not satisfied with airing grievances about the Kavanaugh hearings, Conway then complained about Democrats impeaching the president after he tried extorting a foreign government into investigating his political opponents.

"So let's make sure that they make good use of the question time of Dr. Fauci and this task force, and they're not doing the usual fishing expedition because we've had two years of collusion nonsense, then we tried to impeach the president, remove him from office!" she fumed.