Last-ditch bid to save Oslo building with Picasso murals 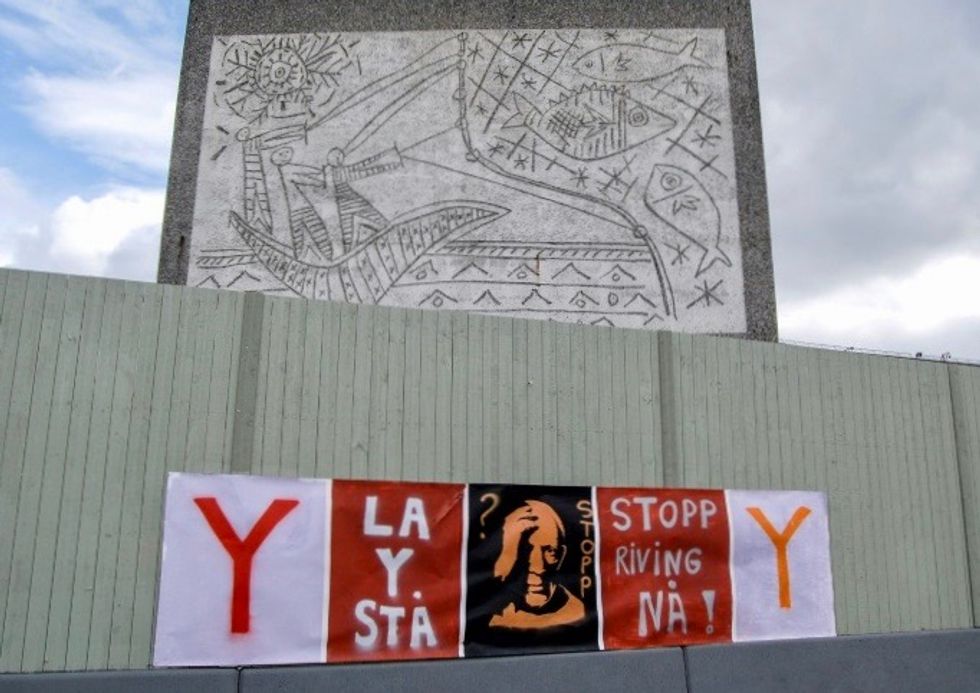 Face masks are rare and social distances vary but the human chain spreads out, braving the risk of infection, as activists in Oslo make a last-ditch bid to save a building adorned with artwork designed by Spanish master painter Pablo Picasso.

Damaged in rightwing extremist Anders Behring Breivik's July 2011 attacks, the "Y Block", a government building complex named for its shape and completed in 1969, is due to be demolished any day now.

On its grey cement walls are two Picasso drawings, sandblasted by Norwegian artist Carl Nesjar, who collaborated with the Spaniard.

On the facade facing the street, "The Fishermen" depicts three men hauling their oversized catch on board their boat. In the lobby, "The Seagull" shows the bird, its wings spread wide, devouring a fish.

Etched in the Spanish painter's childlike strokes, the two works will be cut out and relocated to new government buildings due to be built in the central Oslo neighbourhood.

But not everyone is okay with that plan.

"We're going to be kicking ourselves for years," blasts Erik Lie, one of the 200 or so Norwegians who have come to protest against the demolition on this freezing May morning, one link in the human chain in front of the building.

"I hope it's not too late," he says, his orange woolly hat reading "Let Y Stand", before adding fatalistically: "But this will probably be a pile of rubble soon."

Because of the new coronavirus, protesters are linked by metre-long ribbons in a bid to keep them at a safe distance from one another.

Energised by their despair, they still harbour dreams of ripping the building from the bulldozers' claws.

But behind them, beyond the high fences, the sound of metal saws suggests the preparations are well underway.

According to Statsbygg, the public agency in charge of overseeing the demolition, the murals are to be dismantled before the end of spring.

SCANPIX NORWAY/AFP/File / STORLØKKEN, AAGE Norwegian artist Carl Nesjar sandblasted the Pablo Picasso works into the concrete during the construction of the government building in Oslo, Norway in June 1958

The nearby "H Block" building, built in the late 1950s and which has three other Picasso murals, was home to the prime minister's offices until Breivik blew up a van loaded with 950 kilos (2,100 pounds) of explosives at its base.

"H Block" will be renovated and will continue to tower over the new ministry buildings.

For some, the symbolism is inevitable: these buildings remain standing, despite Breivik's attempts to bring them -- and democracy -- down.

"Y Block is an iconic building in Oslo that has survived a terrorist attack and now the government wants to tear it down. And nobody can actually give a good argument for why they should," says Tone Dalen, one of the figurehead of the protests.

The government meanwhile insists that the demolition of "Y Block" to make space for new buildings was a difficult but necessary decision.

"It will improve security and accessibility for cyclists and pedestrians, and will provide a more open and greener space, as well as offices suited to the future ministries," said Modernisation Minister Nikolai Astrup.

"The Fishermen" and "The Seagull" -- whose existence many Norwegians were unaware of until the question of their relocation arose -- are supposed to be made more visible to the public in their future location.

"A lot of people think that it's Picasso that deserves to be preserved but it's also the architecture and the interaction between 'Y Block' and 'H Block', the history that it represents," insists Erik Lie.

"These are monuments that illustrate the rebuilding of Norway after the war, and everything that I associate with the development of modern society," he says.

With their drab appearance, the buildings' aesthetic qualities may be debated but supporters insist that you cannot destroy everything you don't like.

"Maybe we don't find it beautiful today, but perhaps in 30 years we'll think the opposite," notes Cecilie Geelmuyden, a 50-year-old civil servant and protest supporter.

Despite a growing number of protests in recent weeks, the demolition process now appear irreversible.

At the end of August, the Oslo district court is to consider a request to have the demolition declared illegal.

But that will be too late, in all likelihood.

As Lie predicts, by then, "Y Block" will probably be nothing more than a pile of rubble.