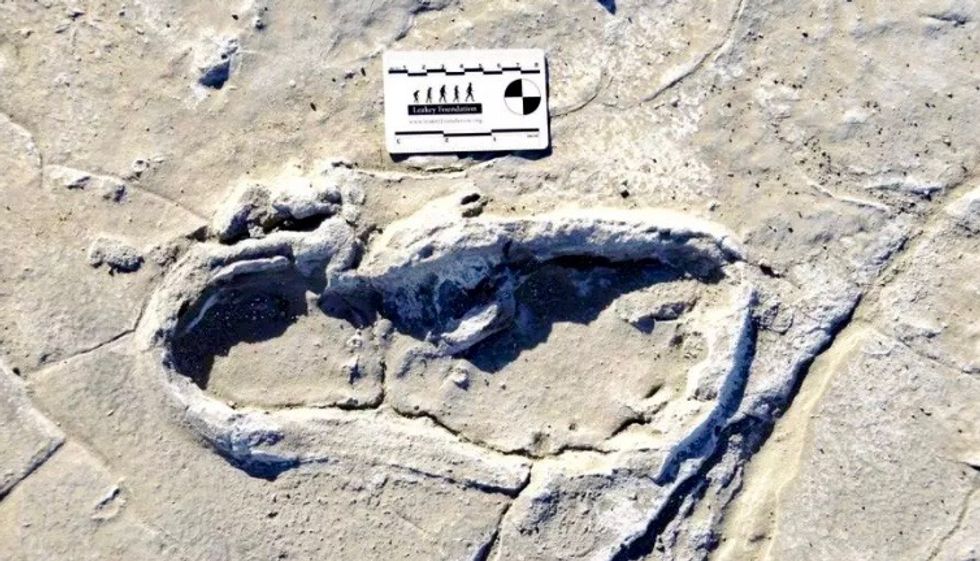 A human footprint dated to between 19,100 and 5,760 years ago at the Engare Sero site, south of Tanzania's Lake Natron William HARCOURT-SMITH COURTESY OF WILLIAM HARCOURT-SMITH/AFP

Thousands of years ago, a group of people took a walk in what is now Tanzania. The footprints they left behind are now offering insights into ancient human life.

The group of more than 400 footprints was made sometime between 5,000 and 19,000 years ago at a site called Engare Sero, south of Tanzania's Lake Natron.

It's the largest group of human footprints ever found in Africa, and offers a glimpse at what humans in the so-called Late Pleistocene period looked like, as well as how they may have gathered food.

"Sites like Engare Sero form over very short time intervals, and so they capture snapshots in time of ancient humans moving across their landscapes," said Kevin Hatala, assistant professor of biology at Chatham University, who led the research.

"Given the rarity and value of this variety of fossil evidence, part of what makes our discovery exciting is its magnitude, with over 400 footprints preserved on the same volcanic ash surface," he told AFP.

"However, we have also been able to learn some really interesting things from these direct windows to the behavior of the group that walked across the footprint surface."

Analysing the footprints was a complex process. In 2009, when the research team first visited the site -- discovered by a local Maasai community -- just 56 footprints were visible, exposed by natural erosion.

Three years of additional excavations revealed hundreds more prints, made by humans but also animals such as zebra and buffalo.

The prints were made in wet volcanic mudflow, which would have dried quickly into a hard surface, said Hatala.

That, combined with other evidence including the lack of overlap on footprints, strongly suggests the impressions were made by a group traveling together at the same time, rather than by individuals moving across the same area at different times.

The research team focused on "distinct trackways" where they could clearly discern stride distances and footprint length, looking for more clues.

Based on the size of the prints and the stride lengths, they determined the group included four adult men, 19 adult women and two younger boys.

There is some room for error, they acknowledge, with the possibility that the smaller feet and shorter strides they attributed to women could in some cases belong to children or adolescents of either gender.

The trackways also allowed the researchers to extrapolate the height of the people who made them, revealing some comparatively tall men among the group, including one standing an estimated 1.83 meters.

Skeletons from around the period in east Africa "have suggested generally tall and long-limbed body builds," said the study published Thursday in the journal Nature Scientific Reports.

"However, skeletal material from this time period and region is generally scarce, underscoring the value of the relatively large sample of anatomical data that is preserved on the Engare Sero footprint surface."

The make-up of the traveling group also offers clues about their lifestyle.

In modern-day hunter-gatherer communities, large numbers of women rarely move in a group, unaccompanied by children or a similar number of adult men, except when foraging for food.

The make-up of the ancient group implied by analysis of the footprints led the team to theorize that is what the group of women may have been doing.

"The behavior itself isn't surprising to see in a human group from this time period," said Hatala.

"But the opportunity to witness the behavior through this direct snapshot is exceptional."

Hatala acknowledged the theory remains just that for now, and more may eventually be revealed by further excavations at the site.

Some tracks exposed by erosion on one part of the site lead to areas still covered by sediment, offering the promise of further prints.

Excavation is on hold for the moment though, because the site is vulnerable to erosion and researchers are hoping to come up with a conservation plan before continuing work.