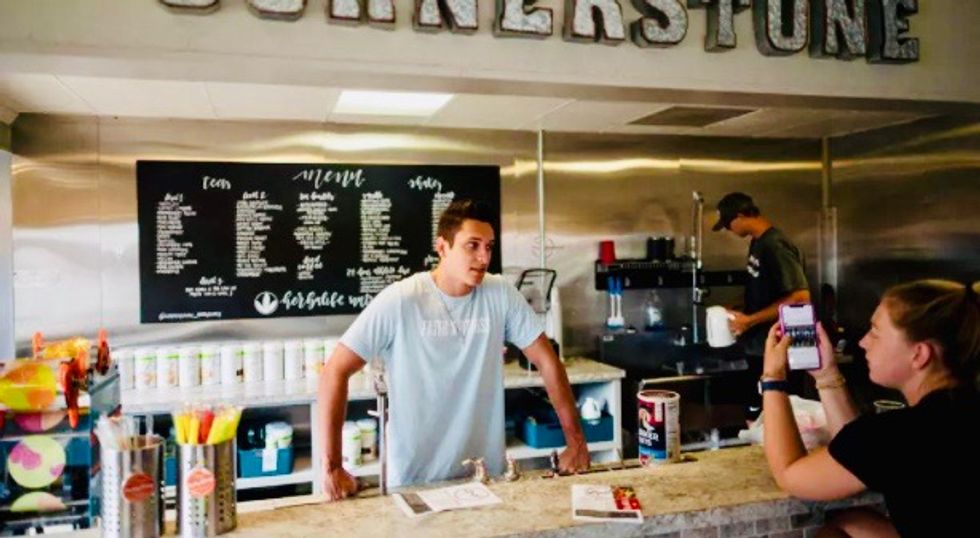 When the mayor of the Midwest town of Stillwater made it mandatory to wear masks in shops and restaurants as Oklahoma joined other US states gingerly reopening their economies, things got ugly, fast.

Three hours after the order went into effect on May 1, police started receiving a slew of emergency calls from employees saying they were being insulted and threatened with physical violence by angry people who said having to wear a mask violated their rights.

One man even said ominously that he would invoke the Second Amendment -- guaranteeing the right to own a gun -- if the rule were not lifted.

And that's just what Mayor Will Joyce did, in one particularly messy chapter of America trying to adapt to the new normal of life with the coronavirus.

A rule requiring the wearing of masks in stores did in fact turn deadly in Michigan state last week: a security guard was shot in the head and died after telling customers they had to wear a mask in a store selling household goods.

In Stillwater, Oklahoma, a university town of around 50,000 people, the mayor issued an amended order that encourages people to wear face masks but does not require them to do so.

"We didn't give in to bullies. We are protecting the safety of our business owners and their employees," city manager Norman McNickle told AFP.

On the main street of Stillwater, lined with small shops and restaurants, the wearing of masks is pretty much hit or miss. Some do, some don't.

Angie Griswold, who owns a gift shop, said it was good to get back to work last Friday after weeks of lockdown that have brought the US economy to its knees.

Even as the pandemic rages, many US states are allowing at least some businesses to reopen as they try to staunch the hemorrhaging of jobs and economic output.

"Not a lot of people busy -- just people ready to spend money and just be out," said Griswold.

She said she fears of new flare up in COVID-19 cases in the weeks to come, but still does not wear a mask herself, calling it a nuisance. Griswold said the virus should be allowed to "run its course."

Griswold said that if face masks were made mandatory she would comply with "no anger or hostility."

Kelly Lyda, who owns a cafe called Aspen Coffee, does wear a mask, one with a jungle motif.

He waited until Monday to open up, taking time to set up a plastic sneeze guard on the counter, mark spots on the floor for people to observe social distancing practices and move his tables further apart.

He does not oblige customers to wear masks but says "there are so many questions and I don’t think we have many answers yet. I support the caution."

Debbie Aguilar, a former nurse who is 40, said city authorities mishandled the issue of masks, which she supports wearing.

They should have made wearing them in public mandatory when the lockdown began, not when some businesses were allowed to reopen, Aguilar said.

"In our state we are pretty independent. We have a lot of people who believe a lot in their fundamental rights," Aguilar said, standing in the street with a cup of coffee.

Imposing the rule suddenly "feels like you are taking my freedom away instead of trying to keep me safe."

Another resident of Stillwater, Riley Flack, cited the US Constitution as he spoke out Monday night against mandatory masks in a city council meeting held via Zoom and broadcast on Facebook.

"You guys ought to be ashamed of the way that you have dismissed the idea that it could be unconstitutional," Flack said.

Flack said he realizes city authorities are just trying to do what is best for everyone in an unprecedented time. But he added, "I would appreciate a little more consideration for my rights as an American."

"Wearing a mask is a pro-social thing," said Monica Whitham, a professor of sociology at Oklahoma State University. "It demonstrates that you care about other people's health and safety."

But in an individualistic country like the US, and a mostly Republican state such as Oklahoma, "there is some push back on big government," said Whitman.

"It's a very tense situation, with health and safety concerns, economic concerns. People are afraid and frustrated and sort of exhausted of the situation. The fact that some of the people are having an emotional repsonse makes a lot of sense," she said.