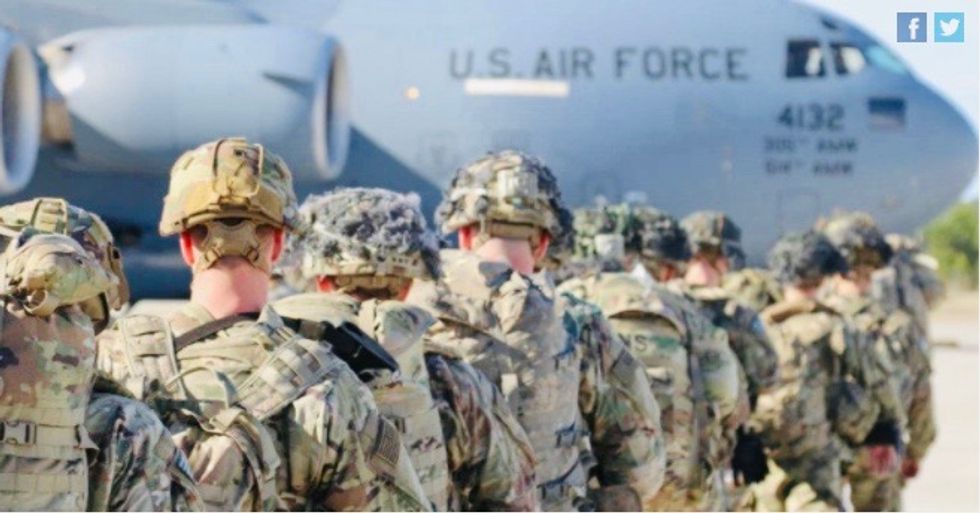 A group of 29 House Democrats said Tuesday that the coronavirus pandemic shows the nation needs "more testing, not more bombs" as they demanded the leadership of the House Armed Services Committee cut Pentagon spending in this year's National Defense Authorization Act (NDAA).

"It's long past time that we address our bloated military budget and retarget resources towards policies and programs that matter the most for keeping us safe, healthy, and secure." —Rep. Barbara Lee (D-Calif.)

"Year after year, the Pentagon budget has inflated to historic levels while the vital needs of everyday people are left unmet," said Rep. Lee in a statement. "The Covid pandemic has laid bare how America has failed to make its budgets reflect the real needs of our everyday families. It's long past time that we address our bloated military budget and retarget resources towards policies and programs that matter the most for keeping us safe, healthy, and secure."

Authorizing less "defense" spending in the annual legislation would give more spending ability to contain Covid-19, the lawmakers wrote. From the letter:

In the last three years alone—during a time of relative peace—we have increased annual defense spending by more than $100 billion, almost 20 percent. This has occurred during a period without any military action authorized by this Congress. Right now, the coronavirus is our greatest adversary. It has killed more than 90,000 Americans, far surpassing the number of casualties during the Vietnam War. We must remain focused on combating the coronavirus and not on increasing military spending that already outpaces the next 10 closest nations combined (China, India, Russia, Saudi Arabia, France, Germany, the United Kingdom, Japan, South Korea, and Brazil). At some point, spending more than every other nation on Earth must be enough.

America needs a coronavirus cure, not more war. We need more testing, not more bombs. In order to reopen our nation in a data-driven, safe manner, we need to focus our spending efforts on the millions of additional coronavirus tests and tens of thousands of additional contract tracers we will need, as well as covering treatment costs, developing therapeutics, and distributing future vaccines.

The number of signatories indicates a potential stumbling block for the upcoming NDAA. The Hill reported:

In 2019, Republicans voted against the initial House version of the bill, meaning it had to pass on Democratic support alone. After a compromise version of the NDAA emerged from negotiations with the Republican-controlled Senate that led to the removal of several progressive priorities, House Republicans supported the measure and it easily passed despite a handful of progressives voting against it.

A statement from Lee and Pocan's office suggests the bloc of lawmakers is willing to be an obstacle. "Republicans withstanding, 19 Democrats would need to vote 'NO' this year for the bill to fail. 29 Democrats signed this letter."

I agree. We need to focus federal resources on battling the coronavirus pandemic and help the American people get… https://t.co/WWW93LssN3
— Rep. Ilhan Omar (@Rep. Ilhan Omar) 1589906009.0

The letter was endorsed by over a dozen progressive groups including CODEPINK, Indivisible, and Peace Action.

"Co-chairs of the Congressional Progressive Caucus, the 'squad' and other representatives know that for real American security Congress must invest in other tools besides the bloated Pentagon to cure the coronavirus and spur a just economic recovery," Paul Kawika Martin, senior director for policy and political affairs at Peace Action, said in a statement.

"Democratic leadership should take note of this important letter," he said.