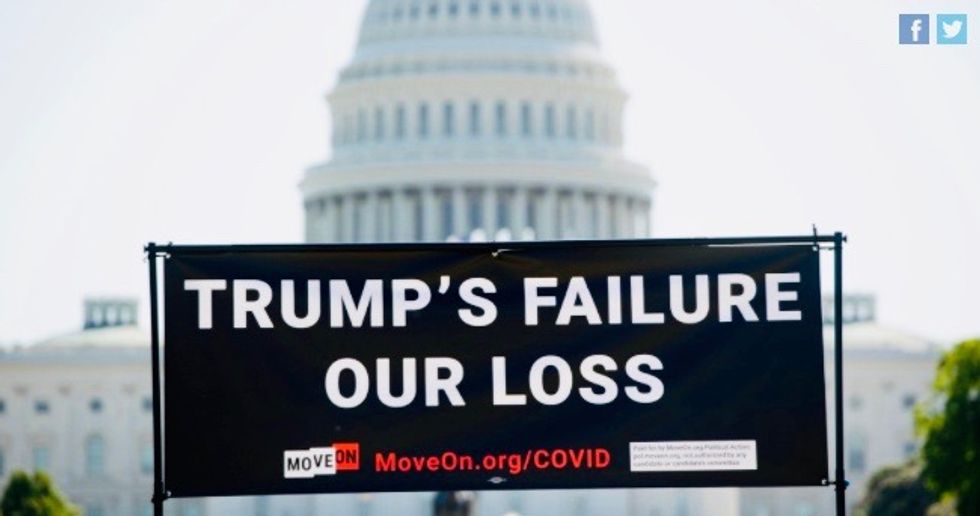 "This should be political suicide. Let's make sure it is."

With Republicans in Congress stonewalling the possibility of any additional coronavirus relief even as tens of millions of people across the U.S are newly out of work, uninsured, hungry, and unable to afford rent, a coalition of progressive advocacy groups is planning nationwide protests this week to condemn GOP obstruction and demand the urgent passage of desperately needed aid for people and families.

On Wednesday, funeral-style actions in more than 20 states across the country will mourn the nearly 90,000 people who have died of Covid-19 and denounce President Donald Trump and the GOP for failing to take sufficiently urgent and bold action against the pandemic. The "National Day of Mourning" was organized by MoveOn, Indivisible, the Center for Popular Democracy, and other groups.

"People should not have to risk their lives and endanger their families to have income in a pandemic. One $1,200 check is not enough. We must ensure every person in this country receives $2,000 a month for the duration of this crisis."

In Washington, D.C., protestors are expected to drive a 200-car funeral procession from Senate Majority Leader Mitch McConnell's (R-Ky.) residence to the White House, passing the Trump International Hotel along the way. Participants are planning to lay down body bags in front of the White House and eulogize loved ones lost to the Covid-19 pandemic.

A similar action is set to take place in South Carolina, where a funeral procession will begin at a local chapel and end at Sen. Lindsey Graham's (R-S.C.) office. Demonstrators plan to leave mock caskets and photos of deceased loved ones in front of the building.

McConnell said last week that Republicans have not yet felt the "urgency" to act quickly on another relief package, and that attitude does not seem to have changed even after House Democrats on Friday passed the HEROES Act, a $3 trillion bill that would extend beefed-up unemployment benefits, provide another round of one-time $1,200 direct stimulus payments, and authorize $1 trillion in funding for state and local governments.

Progressives criticized the bill as deeply flawed and inadequate to the scale of the crisis, but Republicans in Congress and the president have indicated that they are in no hurry to approve any additional aid.

"I'd put the chance of another bill right now at way less than 50 percent for the foreseeable future," Sen. John Kennedy (R-La.) said Sunday. Earlier this month, Trump said he is in "no rush" to negotiate with Congress on another relief package.

"The Republican Senate majority has no immediate plans to produce an alternative [to House Democrats' bill]," Politico reported. "Instead, senators are expected to consider a handful of lifetime judicial appointments this week and then head home for the Memorial Day recess."

This isn't partisan -- it's not 36 million unemployed Democrats. And GOP states have made it so they're least able… https://t.co/Hqv2Ka3qTI
— Caroline Behringer (@Caroline Behringer) 1589726097.0

In response to the GOP's refusal to quickly move ahead with additional economic elief, progressive activist Jordan Uhl tweeted Monday that "millions of people are suffering and Congress is just giving them the finger."

Instead of working on additional economic aid for people, Politico noted, McConnell and Sen. John Cornyn (R-Texas) are busy crafting legislation that would shield some businesses from legal responsibility for workers who contract Covid-19 on the job. McConnell has deemed liability protections for corporations his "red line" for any future relief bill.

"Millions of people are suffering and Congress is just giving them the finger."

"Nearly 90,000 deaths. Jobless claims are up over 30 million," tweeted Rep. Marcia Fudge (D-Ohio). "Not only are Senate Republicans refusing to consider the House-passed HEROES Act, they don't even have an alternate plan."

Sen. Bernie Sanders (I-Vt.), who criticized the HEROES Act as insufficient ahead of its passage last week, is calling on the Senate to take up the House bill and make improvements that ensure economic security and healthcare coverage for all during the Covid-19 emergency.

"People should not have to risk their lives and endanger their families to have income in a pandemic," Sanders tweeted Sunday. "One $1,200 check is not enough. We must ensure every person in this country receives $2,000 a month for the duration of this crisis."