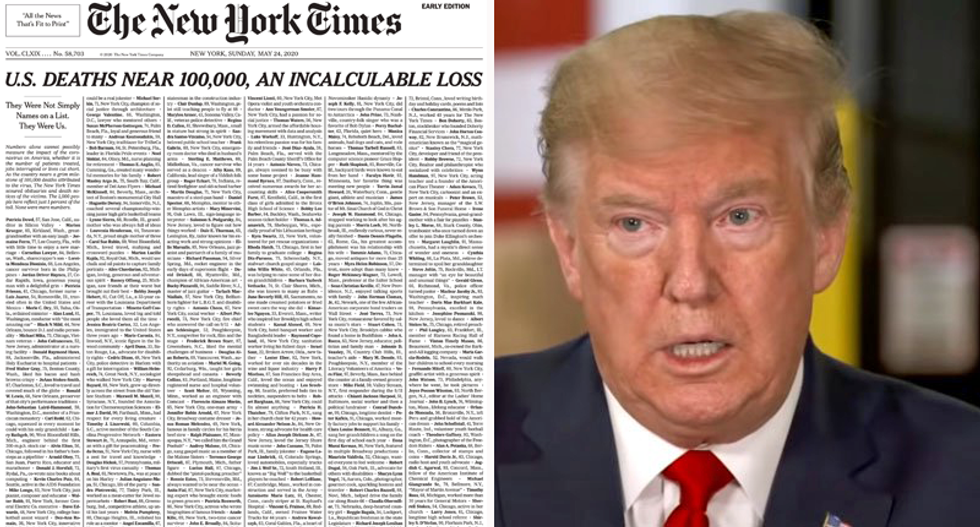 After revealing that Sunday's New York Times would not feature an image on the front page, but would instead list the names of COVID-19 fatalities, the newspaper was praised online.

“U.S. deaths near 100,000, an incalculable loss," the headline read above six columns of names.

“They were not simply names on a list. They were us," reads the subhead.

“Numbers alone cannot possibly measure the impact of the coronavirus on America, whether it is the number of patients treated, jobs interrupted or lives cut short. As the country nears a grim milestone of 100,000 deaths attributed to the virus, The New York Times scoured obituaries and death notices of the victims. The 1,000 people here reflect just 1 percent of the toll,” the paper explained. “None were mere numbers.”

Here's some of what people were saying about the front page:

"Mr. Bodkin said he did not remember any front pages without images during his 40 years at The Times. 'This is cert… https://t.co/mBPRWFUbTw
— Brooke Jarvis (@Brooke Jarvis)1590273089.0

This is astonishing. Read closely; It’s not just their names, it’s a one line biography of each and every person. https://t.co/eFDRIyew5f
— Rachel Parris (@Rachel Parris)1590273439.0

Thank you @nytimes for doing this. Trump reaction: "I am going to pretend again to cancel my subscription!" https://t.co/yZzybOKsna
— David Mandel (@David Mandel)1590273642.0

We know the losses are shocking and heartbreaking - but this is a visceral gut punch. https://t.co/l1KQ8nZYZD
— Chris Jansing (@Chris Jansing)1590273371.0