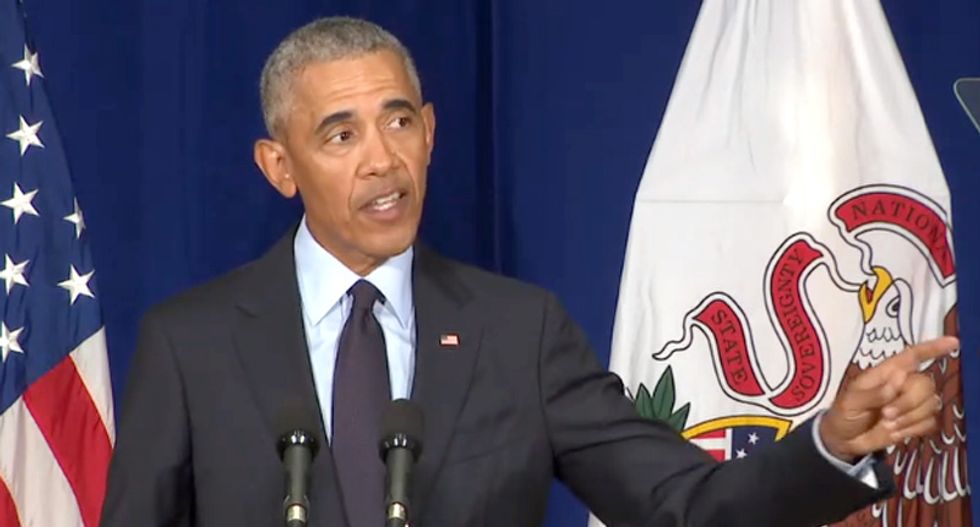 Barack Obama speaks at the University of Illinois. (Screenshot)

In an official letter to the National Archives, President Barack Obama unleashed on Republican Senators he says are trying “to give credence to a Russian disinformation campaign,”

According to the letter, obtained by BuzzFeed News, Obama’s Office of the Former President told the National Archives and Records Administration, the office responsible for presidential records, "that a request from two top Republican senators for Obama administration documents related to Ukraine was improper."

“It arises out of efforts by some, actively supported by Russia, to shift the blame for Russian interference in the 2016 election to Ukraine,” the letter, dated March 13, said.

The letter pointed to comments from former diplomat Fiona Hill, who testified to Congress that any claims of Ukrainian election meddling is “a fictional narrative that is being perpetrated and propagated by the Russian security services.”

It went on to say that they have provided thousands of records in response to requests from Congress, but in this case, the Republican senators can take a flying leap.

"Since 2017, the Office of President Obama has produced 12,880 pages of presidential records in response to special access requests from the White House and Congress," the letter said.

“The request for early release of presidential records in order to give credence to a Russian disinformation campaign — one that has already been thoroughly investigated by a bipartisan congressional committee — is without precedent,” said the letter, signed by Obama’s records representative. “This use of the special access process serves no legitimate purpose, and does not outweigh or justify infringing confidentiality interests that all presidents have sought to protect.”

You can read it below: