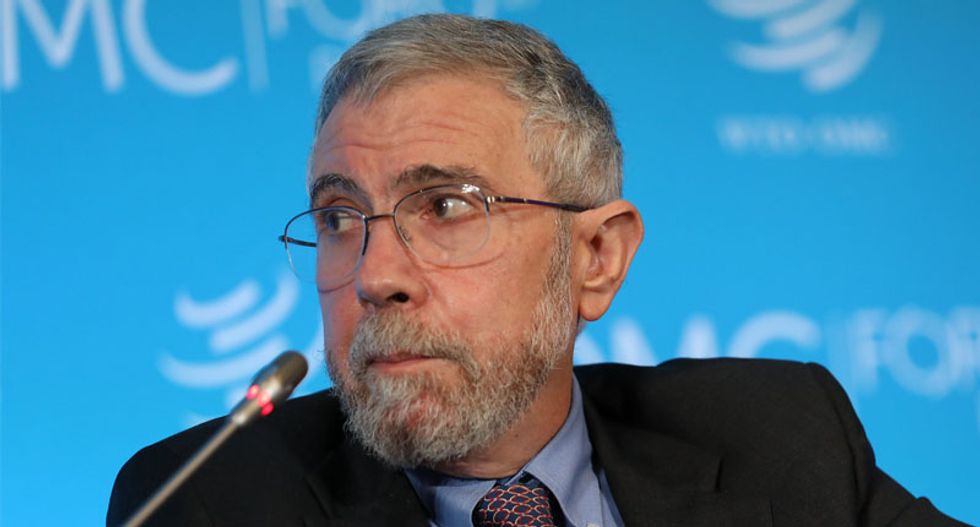 When many centrist Democrats were embracing neoliberalism during the 1990s and 2000s, Paul Krugman remained an unapologetic proponent of classic New Deal/Great Society economics — and as the 67-year-old economist and New York Times columnist sees it, everything from the Great Recession to Donald Trump’s disastrous presidency has only validated his point of view, which is very much in evidence in his most recent book, “Arguing with Zombies: Economics, Politics and the Fight for a Better Future.” And Krugman’s book has received a rave review from journalist Charles Kaiser in The Guardian.

Krugman, Kaiser notes, has “four essential rules for successful punditry: stay with the easy stuff, write in English, be honest about dishonesty, (and) don’t be afraid to talk about motives.”

“Those maxims have consistently made Krugman the most intelligent and the most useful New York Times pundit, at least since Frank Rich wrote his final must-read column 11 years ago,” Kaiser writes. “A new collection of Krugman’s pieces, therefore, is a timely reminder that actual knowledge and ordinary common sense are two of the rarest qualities in mainstream journalism today.”

Trickle-down economics — the belief that when the rich get richer, their gains will “trickle down” to others — has been a prominent feature of the Republican Party ever since Ronald Reagan was elected president in 1980. And Democratic neoliberals have embraced elements of trickle-down economics as well. But Krugman, Kaiser points out, has flatly rejected that economic philosophy.

“The same tired arguments in favor of coddling the rich have been rolled out over and over again by Republican presidents from Ronald Reagan to Donald Trump, even though there has never been a shred of serious evidence to support them,” Kaiser writes.

Krugman uses the “zombie” theme in his latest book because he believes that even though Republican economic ideas have been debunked time and time again, they live on — and Trump, for all his pseudo-populism, has embraced them.

“It’s not just that Trump has assembled an administration of the worst and the dimmest,” Krugman says in his book. “The truth is that the modern GOP doesn’t want to hear from serious economists, whatever their politics. It prefers charlatans and cranks, who are its kind of people.”

Krugman, in recent columns, has been stressing that the coronavirus pandemic underscores the failures of trickle-down economics. And Kaiser asserts that the pandemic validates Krugman’s economic views.

Kaiser writes, “Never before in modern American history has the plutocracy so blatantly embraced the idea that profits matter much more than people — especially when the idiotic reopening of the economy weeks before health experts say it’s safe will clearly kill more poor people than anyone else…. If our present calamity is finally enough to force the climate-change-denying, poor-people-hating Republican Party from the White House and the Senate, one can only hope the popular imagination will be stirred as it was in Paris in 1793.”