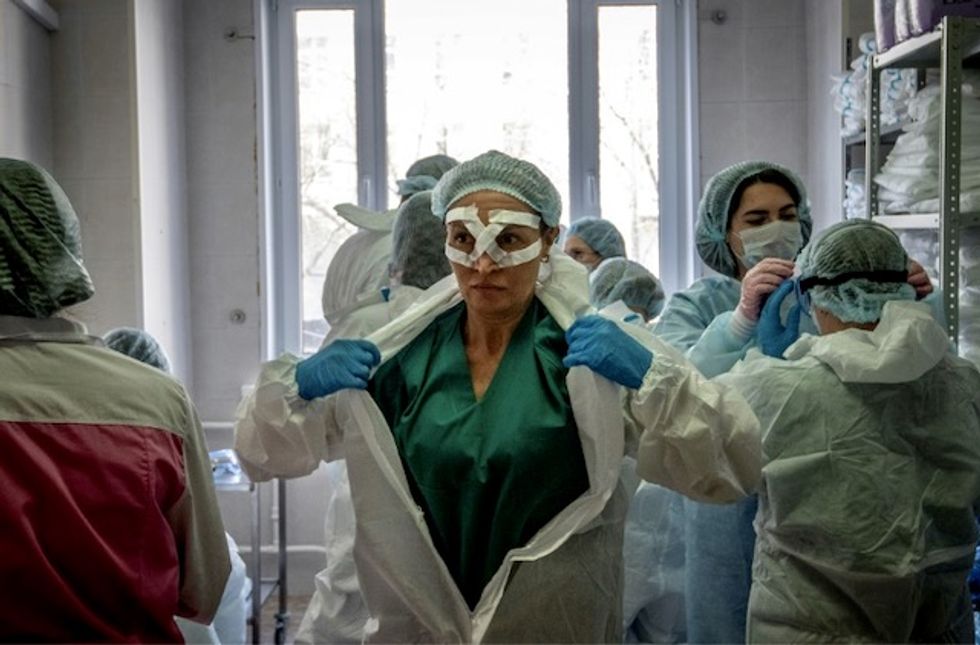 Health Minister Mikhail Murashko told parliament more than 100,000 patients are now hospitalised with confirmed or suspected coronavirus, a significant jump from the figure of 80,000 he gave on Friday.

Nearly 1,500 patients are currently on ventilators, the minister said.

Six patients have died in deadly fires at hospitals in Moscow and Saint Petersburg over the past week.

The blazes have been linked to domestically-produced ventilators and the country's healthcare regulator on Wednesday suspended the use of the particular model involved.

Murashko acknowledged ongoing "disruptions" in supplies of personal protective equipment for medics, while he said those working in "red zones" with infected patients now have enough.

The Kremlin this week began easing a national lockdown to slow the spread of the virus, despite a steady rise in numbers that on Tuesday brought Russia to second place in a global tally of infections, behind the United States.

A majority of Russia's new cases were registered in the capital, a government virus tally said, where Moscow Mayor Sergei Sobyanin has extended a lockdown until the end of May.

President Vladimir Putin's spokesman Dmitry Peskov has become the most recent senior official to test positive for the coronavirus.

He told reporters he was receiving treatment in hospital.

His wife, Olympic ice dancer Tatiana Navka, who has also tested positive, wrote on Instagram that she was already recovering but "it's a bit more complicated for my husband".

Despite the steady rise in new cases, Russia's reported mortality rate is significantly lower compared to other European countries hit hard by the pandemic, with 96 new deaths and a total of 2,212 dead from the coronavirus as of Wednesday.

Authorities say the low mortality rate is because Russia was able to learn lessons from the experiences of western Europe, moving quickly to isolate travelers and people at risk, convert hospitals for virus patients and launch a vast campaign to test and quarantine those infected.

Health Minister Murashko said low fatalities were "thanks to our hero medics."

Authorities on Monday said they had carried out nearly six million tests.

But critics have cast doubt on the figures, accusing the authorities of under-counting by blaming virus-related deaths on other causes.

Murashko said that Russia was working on developing vaccines and clinical tests are planned to start in June.