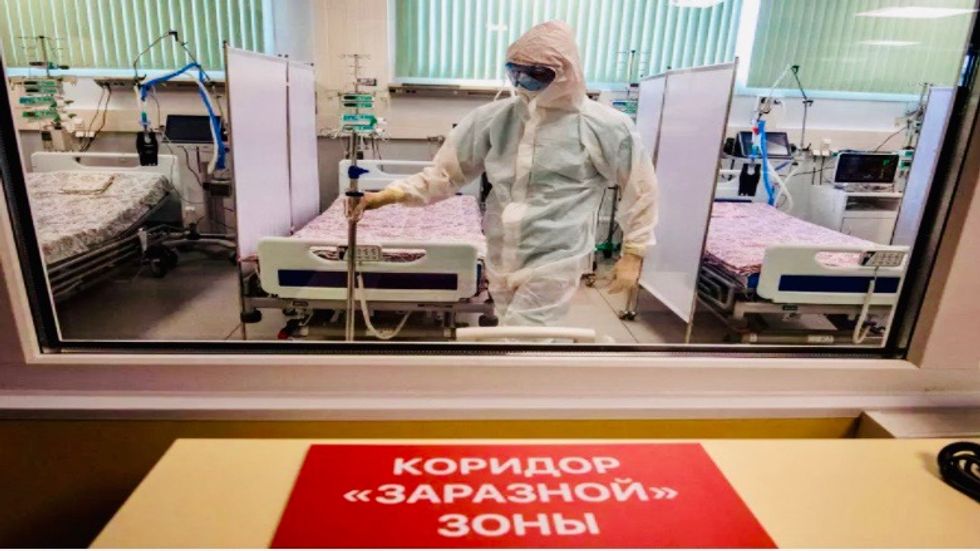 Maria, a 24-year-old doctor working outside Moscow, expected to be paid extra if one of her patients tested positive for the coronavirus. Instead, her salary shrank.

In a small town 200 kilometres (120 miles) from the capital, she visits patients at home and normally has around three calls a day. But that number surged to 30 in April as the pandemic struck Russia.

When President Vladimir Putin promised on TV in April that doctors would get a monthly bonus of 80,000 rubles ($1,100) for treating virus patients, she thought it was compensation for increased risk and workload.

"I hoped that if I came in contact with the infection, I would also get some extra money," said Maria, who spoke on the condition of anonymity, fearing she could damage her career prospects.

What happened was quite different.

After a patient she visited and swabbed tested positive, Maria was ordered to self-isolate for two weeks. When she got her April salary, it was cut to just 14,000 rubles.

Her salary varies from month to month, but the most she makes is 36,000 rubles, working two different jobs and overtime, she said.

"I could have contracted the virus, but instead of a bonus, my salary is less than usual," said Maria, who was only given one surgical mask and a pair of gloves per shift.

Healthcare workers across Russia watched Putin promise doctors extra pay and monthly bonuses of between 25,000 and 80,000 rubles to medics and drivers working to fight coronavirus.

But when overworked doctors opened their April pay slips, most saw no sign of these generous sums.

Many posted photos online of pay cheques where the extra money amounted to $10 dollars or less -- or nothing at all.

The government has transferred 27 billion rubles for healthcare bonuses, but regional authorities have only paid out 4.5 billion, he said.

"There are problems with payments even in regions most hit by the infection, where the workload on medics is at the maximum," he admitted.

With more than 242,000 confirmed COVID-19 cases and cases steadily rising, Russia has the world's second-highest number of infections.

Andrei Konoval, head of the Action union of medical workers, said Putin's directive lost its punch as it percolated through the healthcare system's bureaucracy.

Some hospitals only added certain staff to "coronavirus teams", so when others, like Maria, faced the virus they were not eligible for the bonus.

In some regions, facilities calculated time in contact with the infection down to the minute to save money.

Ambulance crews at some hospitals would only get paid extra for treating confirmed coronavirus cases.

"In reality, ambulance teams going out on a call about high blood pressure risk infection even more," because they have less protection and patients do not know if they are infected, Konoval said.

Putin's bonus promise had sounded "very attractive", he said, "but it has resulted in huge disappointment among doctors."

That feeling has compounded frustration in the medical community that they are taken for granted, especially after a recent cycle of "optimisation" reforms that closed thousands of clinics.

"This looks like a cruel joke to medical workers" already used to unfulfilled promises, says a petition launched last week by the Action union, which is demanding full payouts.

The appeal, which calls on the government to widen eligibility for extra payments, has been signed by more than 90,000 people.

Konoval said the Kremlin's vow to pay doctors extra created tension between medics and society at a time when most Russians are struggling economically.

"This rumour that doctors get paid a lot of money during the pandemic is unpleasant for doctors who continue to work for a pittance," he said.

Most in the field are unwilling to demand extra pay in a country where the medical profession is regarded as a service, rather than work that should be compensated appropriately.

"Patients are telling us that we must be getting a lot of money for working so much," Maria, the doctor outside Moscow, said.

"But nobody complains because it makes no difference," she said. "I want justice to prevail, but I'm not going to start a war."