'Scared of what will happen if he lets people vote': Rights groups know why Trump panicked by mail-in ballots 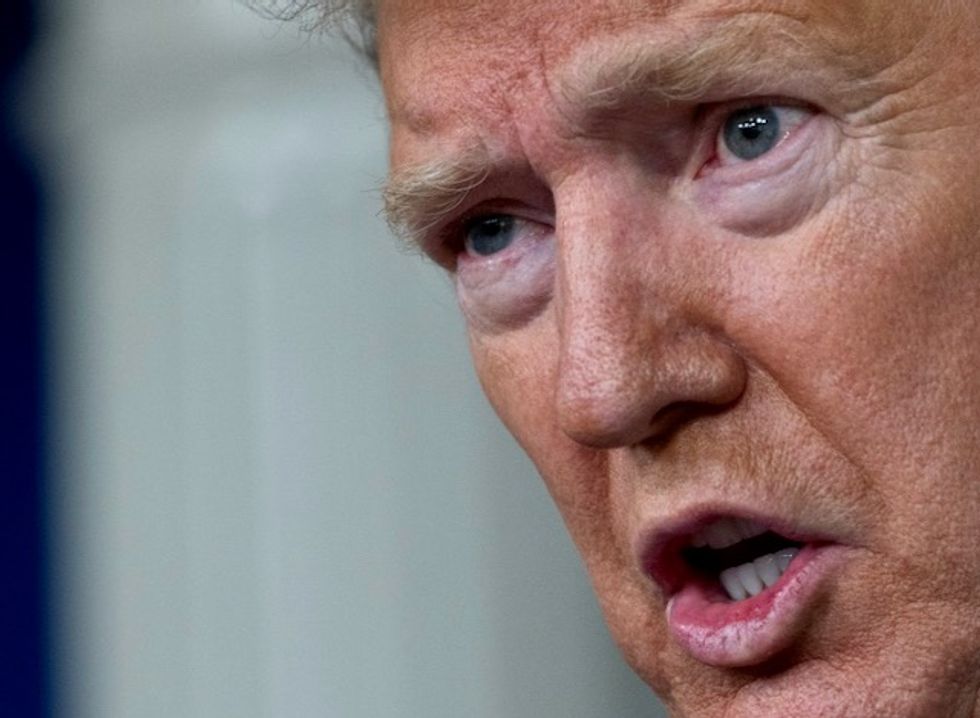 President Donald Trump on Tuesday alarmed pro-democracy advocates once again by elevating his attacks on voting rights by falsely claiming that mail-in ballots are inherently "rigged" and suggested the results of the November general election would be illegitimate if a vote-by-mail system is used.

The president—who has long railed against supposed "voter fraud" despite multiple studies showing cases of fraudulent voting are "vanishingly rare" and nowhere near common enough to swing election results—took aim in his tweets at California Gov. Gavin Newsom, who issued an executive order earlier this month to send mail-in ballots to every registered voter in the state for the November election.

Trump tweeted that the order is unjust as it will allow "anyone living in the state," including people who "have never even thought of voting before" to cast ballots in the presidential election, suggesting that mobilizing first-time voters is a suspicious activity.

There is NO WAY (ZERO!) that Mail-In Ballots will be anything less than substantially fraudulent. Mail boxes will b… https://t.co/les5rPlDLQ
— Donald J. Trump (@Donald J. Trump)1590495473.0

"The degree Trump hates mail-in voting should tell you there's something he's scared of," tweeted the grassroots advocacy group Stand Up America. "He's scared of what will happen if he lets people vote."

Stand Up America was joined by pro-democracy groups Indivisible and Let America Vote on Tuesday in a press call Tuesday in which the organizations condemned the president's tweets. Sean Eldridge, president of Stand Up America, called Trump's protests against mail-in voting—which he himself has used in past elections—"the height of hypocrisy."

"Despite the president's lies, you are far more likely to be struck by lightning than to commit vote-by-mail fraud in the United States of America," Eldridge told the press. "Donald Trump votes by mail, Mike Pence votes by mail, the American people should be able to vote by mail too."

The groups called on the Senate to pass $4 billion in election assistance funding to help expand vote-by-mail systems across the country.

"Election assistance must be a non-negotiable part of the next relief package, and we need Democrats in both chambers to use their leverage and ensure that it is included," Eldridge said. "They cannot take no for an answer. Because the vast majority of Americans want vote by mail and no-excuse absentee ballots as an option for every voter this year."

On social media, Indivisible co-founder Ezra Levin was among those who warned voters that the president is preparing to claim the general election is a "sham" if he loses.

"He's telling us his game plan," Levin tweeted. "Be prepared."

If Trump loses he will still be president for 2.5 months and will be claiming it was a fraudulent election every da… https://t.co/fbk1em9Cfh
— Seth Masket (@Seth Masket)1590499618.0

Trump's tweets followed a lawsuit filed by the Republican National Committee and other GOP groups challenging California's plan to send mail-in ballots to every voter in the state.

Since before the coronavirus pandemic, Colorado, Washington, Hawaii, Oregon, and Utah all conduct elections via mail-in voting. In recent weeks other states including Michigan, Maryland, and Ohio have arranged to send paper ballots to voters for upcoming elections, following last month's in-person primary election in Wisconsin which was linked to dozens of Covid-19 infections.

"Mail-in ballots are not some kind of new technology," activist Delilah Asterales tweeted. "They've been used for decades. The Military uses them. Entire states use them. YOU used one. Get a grip. The reality is that you are scared that if it is easier to vote, more people vote...and they vote against YOU."

The Boy Scouts of America has said it will sell its vast collection of Norman Rockwell paintings as part of a multi-million-dollar victims' fund to settle sexual abuse lawsuits.

From "Jolene" to "Vaccine" -- country music legend Dolly Parton has received her first Covid shot, and urged Americans to follow her lead with a rewrite of her classic hit singing the vaccine's praises.