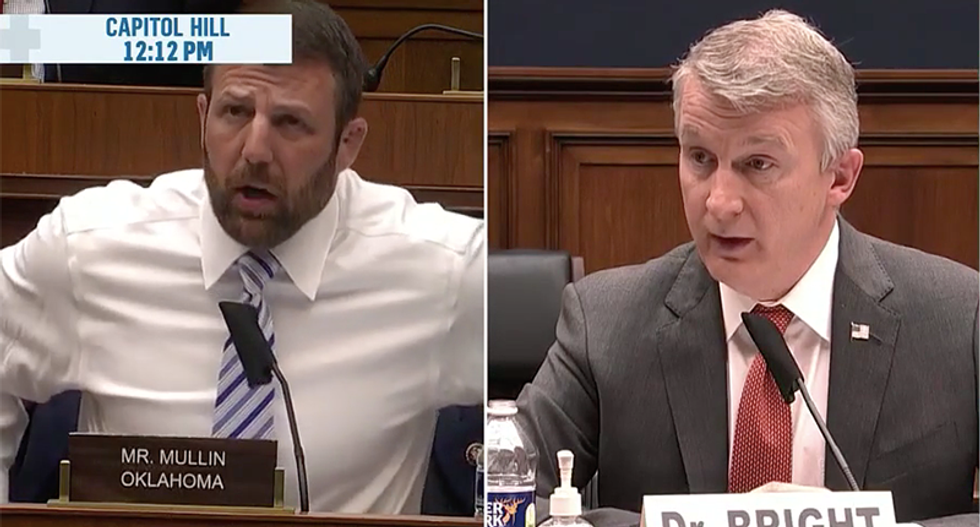 Rep. Markwayne Mullins (R-OK) spent his time during the hearing to interview whistleblower Dr. Rick Bright about his high blood pressure. While many members of Congress were asking questions about the investigations into hydroxychloroquine, the national stockpile, the administration's lack of response to early warnings about the coronavirus and how to protect Americans.

The conservative plumber demanded details from Dr. Bright on why he was on medical leave from his new position at the National Institute of Health, where he transitioned after being ousted at the Department of Health and Human Services. Dr. Bright explained that being ousted, thrust into the spotlight and attacked by conservative media has been more stress than he's accustomed to experiencing as a doctor.

The internet swiftly responded to Mullin, calling him out for what they called embarrassing, cruel and an unnecessary line of questioning that didn't get to the bottom of why over 85,000 Americans have died from COVID-19.

Moments later Health and Human Services Secretary Alex Azar attacked Dr. Bright, saying he isn't showing up to work when he's needed the most. It's an ironic claim given Azar and Trump removed Bright from his position. If he was so necessary, it's unclear why Dr. Bright was removed.

You can see their responses below:

@RepMullin you are a vial POS how dare you make fun of someone with high blood pressure. You are a asshole. How do you sleep at night.
— Denise Lynn (@Denise Lynn)1589472940.0

@kendallybrown Is he the one asking Dr Bright why he can’t manage his blood pressure? And inferring that he shouldn… https://t.co/tx8uAFbqpC
— Helen (@Helen)1589472970.0

@RepMullin line of questioning is raising this nurse's blood pressure, the disrespect is STUNNING to me.
— helenanurse (@helenanurse)1589472870.0

@RepMullin what an ass. Hope all your kids see how nasty you are to a man with high blood pressure illegally remov… https://t.co/gFcTmN0nnT
— MsDayTwo (@MsDayTwo)1589472886.0

FYI, to the gentleman from OKLAHOMA, Coming forward and telling the truth helps lower that blood pressure. #DrBright
— Tammi (@Tammi)1589472891.0

@RepMullin hey asshole let the DOCTOR finish a sentence. What the hell is wrong with you? interrogating the doctor… https://t.co/viRNkPpzX3
— Pierre Infecto (@Pierre Infecto)1589472894.0

@RepMullin why are you focusing on Dr. Bright blood pressure rather than the dire warning he is sharing about dange… https://t.co/9wCeUfnIPe
— Anne Frank Zappa (@Anne Frank Zappa)1589472922.0

@Iwillnotfall The line of questioning from the majority of Republicans on the committee has been awful. But Mullin'… https://t.co/EZPsDp23PB
— Kimberly Tyda (@Kimberly Tyda)1589473968.0