SoCal blasted for lockdown protest: ‘Huntington Beach has become the Florida of California’ 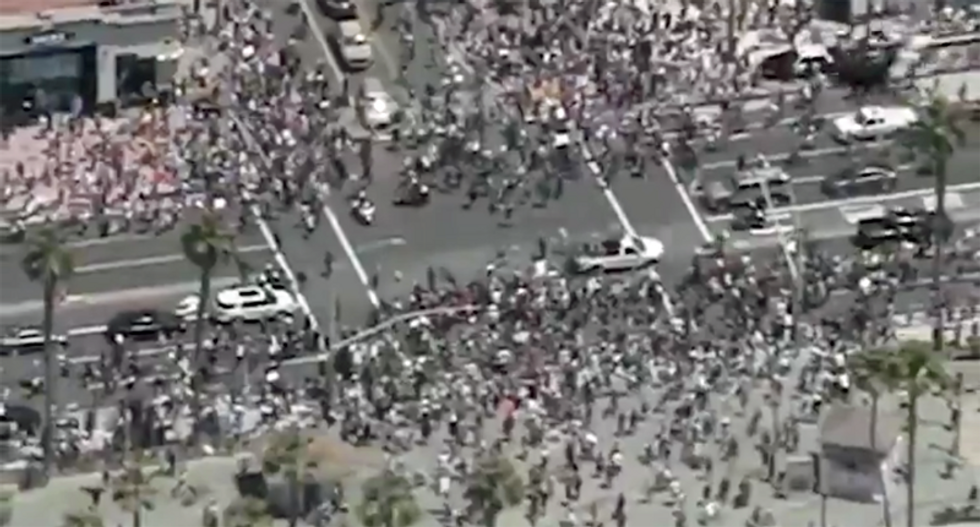 Southern California was the scene of a large, anti-lockdown protest on Friday.

"Large crowds opposing the state’s coronavirus stay-at-home mandate took to the streets of downtown Huntington Beach Friday, a day after the governor closed Orange County beaches and drew frustration and criticism from some residents and city leaders," The Orange County Register reported Friday.

"More than a thousand protesters gathered near the Huntington Beach pier shortly before noon. The tightly packed crowd, with most people not wearing protective masks, repeatedly chanted 'U.S.A.' as they waited for the demonstration to begin," the newspaper noted.

The protesters were blasted online, here's some of what people were saying:

Police & sheriff's deputies on horseback, on foot & on motorcycles blocking protesters out of the street in front o… https://t.co/GwLyqoKw1Q
— Peter Morley (@Peter Morley) 1588371931.0

Side by side view of Governor Newsom’s updates on the Coronavirus response and then the live view of the protest in… https://t.co/O34OViaSDf
— InMinivanHell (@InMinivanHell) 1588360251.0

Live from Huntington Beach, California. We have ALL been shut in for weeks to protect each other from #COVID Ple… https://t.co/uHGjBIt5dz
— Peter Morley (@Peter Morley) 1588371764.0