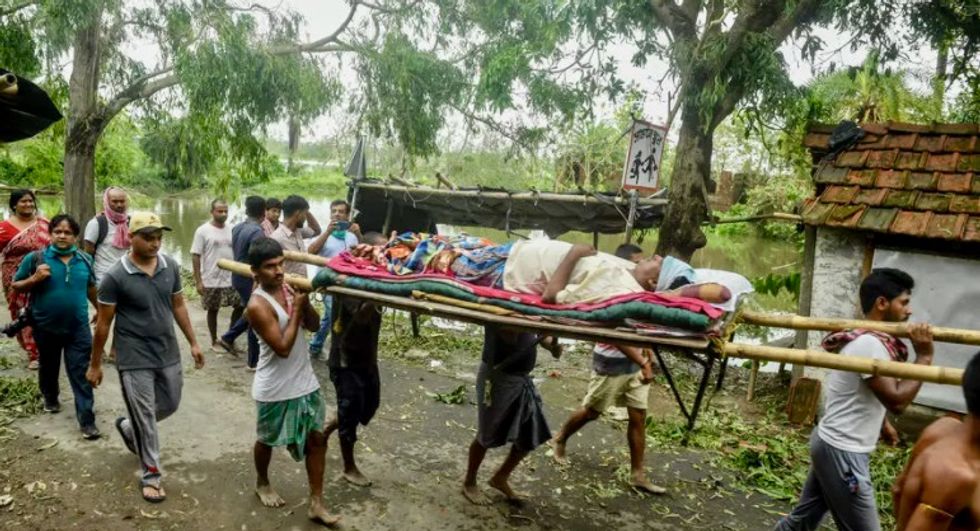 Amphan, only the second "super cyclone" ever recorded over the Bay of Bengal, bulldozed houses, tore off roofs, uprooted trees and left millions without power when it hit late on Wednesday.

The total was much lower than the many thousands of fatalities recorded in previous cyclones, thanks to better forecasting and the timely evacuation of over three million people.

However, huge damage was done in coastal areas as vast volumes of seawater rushed inland, inundating villages and shrimp farms that are vital to the Bangladeshi economy.

The United Nations in Geneva said Friday that the saltwater is expected to have "a severe impact on livelihoods for the next 2-3 years".

West Bengal's capital Kolkata was also badly hit, with 19 dead, parts of the old city flooded and hangar roofs at the airport caved in on top of aircraft.

The bodies of 11 people who were electrocuted were recovered from the flooded streets.

The storm also blew off the black weathercock on top of a 205-year-old church in Kolkata city centre that has survived countless cyclones before.

"It was as old as the church," Father Swarup Bar told AFP. "We have only been able to trace small pieces of one of the wings of the cock so far."

"The whole country is now with West Bengal at this critical time and we will jointly rebuild the areas ruined by the cyclone," Modi said.

The damage did not appear to be as bad as feared in the Sunderbans, the vast mangrove forest area home to Royal Bengal tigers, Ganges dolphins and other endangered species straddling India and Bangladesh.

"Some Keora trees in the forest have been uprooted and some branches were broken. But overall the damage was not big," said Amir Hossain Chowdhury, Bangladesh's chief forester.

He said that 65 of the forest's 81 freshwater ponds that are vital for local fauna would now be pumped to remove seawater brought in by a smaller-than-predicted storm surge.

Four teams would also scour the dense 140,000-hectare forest to inspect the damage to wildlife, but so far no dead bodies had been found, he added.

Like in previous cyclones, the vast Sunderbans area, a UNESCO world heritage site dubbed the "lungs of Bangladesh", acted as a brake on the weather system.