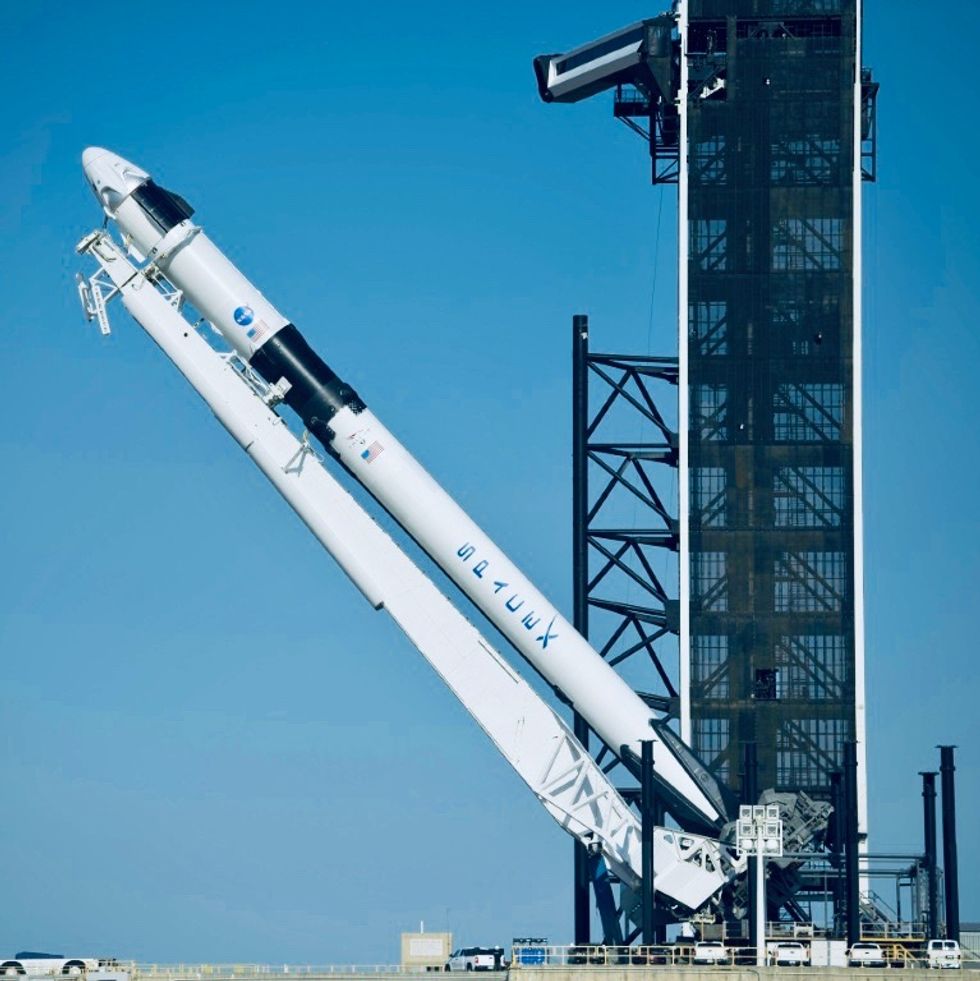 After a day of suspense, SpaceX's landmark launch to the International Space Station -- the first crewed mission to blast off from US soil in almost a decade -- was scrubbed Wednesday due to fears of a lightning strike.

With NASA astronauts Bob Behnken and Doug Hurley strapped into the Crew Dragon capsule, the launch pad platform retracted and rocket fueling underway, SpaceX made the call to abort.

"Unfortunately, we are not going to launch today," launch director Mike Taylor said, with about 17 minutes to go until takeoff.

"We had just simply too much electricity in the atmosphere," NASA chief Jim Bridenstine said later.

"There wasn't really a lightning storm or anything like that, but there was a concern that if we did launch it could actually trigger lightning," he added.

This was the case for the Apollo 12 mission, which was struck twice shortly after launch -- losing the use of some non-essential instruments but completing its mission nonetheless.

A rocket and its plume ascending through clouds act as conductors and can trigger lightning at lower levels of atmospheric electricity than what is required for natural lighting.

The delay means a wait of at least a few more days for the first crewed launch on an American rocket since the space shuttle program ended in 2011. They will try again on Saturday.

If successful, the launch will be the first time the feat has been performed by a privately owned company.

A live video feed showed Behnken and Hurley -- in their futuristic white uniforms adorned with the US flag and the logos of NASA and SpaceX -- waiting as propellant was unloaded from the reusable Falcon 9 rocket after the launch was postponed.

The emergency ejection system remained armed until the fuel tanks were emptied, in case of an accidental explosion.

The launch had been scheduled for 4:33 pm (2033 GMT) from the Kennedy Space Center's Launch Pad 39A. Neil Armstrong and his Apollo 11 crewmates lifted off from the same spot on their historic journey to the Moon.

The mission comes despite shutdowns caused by the coronavirus pandemic, with the crew in quarantine for the past two weeks.

President Donald Trump and First Lady Melania Trump had arrived in Florida to watch, but headed back to the White House once the launch was called off.

Founded in 2002, Space Exploration Technologies Corp. has torn up the rules to produce a lower-cost alternative to human spaceflight that has gradually won over skeptics.

NASA/AFP / Bill INGALLS NASA astronauts Douglas Hurley, left, and Robert Behnken, wearing SpaceX spacesuits, are seen as they depart the Neil A. Armstrong Operations and Checkout Building to board the SpaceX Crew Dragon spacecraft -- the mission was eventually scrubbed

By 2012, it had become the first private company to dock a cargo capsule at the ISS, resupplying the station regularly ever since.

Two years later, NASA ordered the next step: to transport its astronauts there by adapting the Dragon capsule.

"SpaceX would not be here without NASA," founder Elon Musk said last year, after a successful dress rehearsal without humans for the trip to the ISS.

The US space agency paid more than $3 billion for SpaceX to design, build, test and operate its reusable capsule for six future space round trips.

The project has experienced delays, explosions, and parachute problems -- but even so, SpaceX has beaten aerospace giant Boeing to the punch.

Boeing's NASA entry, the Starliner, is still not ready.

The move by NASA to invest in privately developed spacecraft -- a more budget-friendly proposition than spending tens of billions of dollars developing such systems itself, as it had done for decades -- was begun under the presidency of George W. Bush for cargo, and then under Barack Obama for human flight.

At the time, there was immense hostility in Congress and NASA to the start-up's claims of what it could achieve.

A decade on, it was Trump who was present for the launch.

The Republican is trying to reaffirm American domination of space, militarily but also by ordering a return to the Moon in 2024.

NASA hopes to entrust "low Earth orbit" space travel to the private sector in order to free up dollars for its more distant missions.

Crew Dragon is a capsule like Apollo, but updated for the 21st century. Touch screens have replaced switches. The interior has more subtle lighting.

It looks entirely different from the huge winged space shuttles that carried astronauts into space from US soil from 1981 to 2011.

When the mission eventually goes ahead, Crew Dragon will catch up with the space station, and will probably remain docked there until August.

If it fulfills its mission and is certified safe, it will mean the Americans will no longer depend on Russian Soyuz rockets for access to space rides.