‘Take on the enemy because we have no choice’: Fox News urges viewers to ‘get the military mindset’ for war to re-open 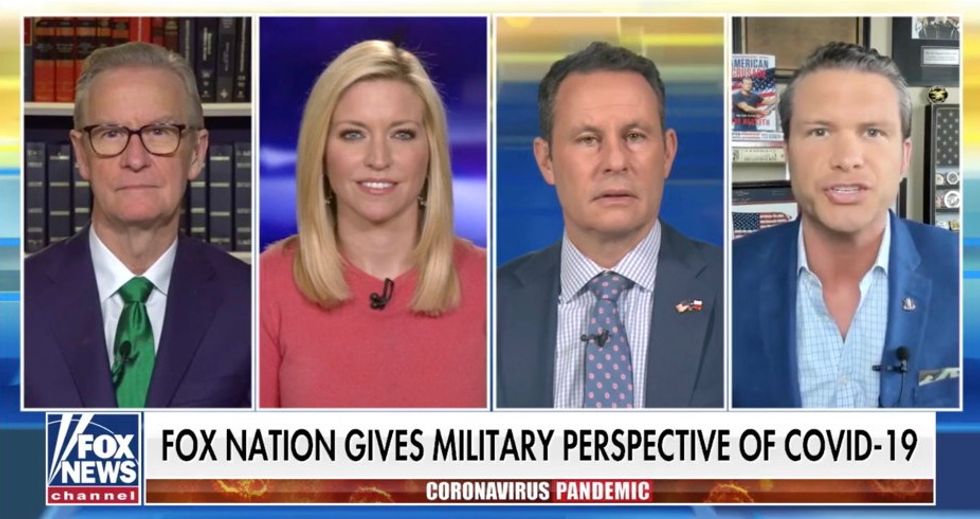 Fox News has morphed into a recruiting center urging viewers to enlist in President Donald Trump's war to re-open the nation despite the guarantee of increased coronavirus infections and deaths. The right wing cable channel and its Fox Nation streaming service have rebranded re-opening the nation by echoing President Trump's "warrior" analogy, and have taken that to the extreme.

Last week President Trump said, “We have to be warriors. We can’t keep our country closed down for years.” To Trump, the coronavirus is the "invisible enemy," he is a "wartime president," and average Americans must become "warriors" in his real life-or-death battle – which is actually to win re-election. Casualties, it seems, are of little concern.

On "Fox & Friends" Monday morning co-host Brian Kilmeade urged his weekend co-host, Pete Hegseth, to frame the argument of "the military mindset" on the coronavirus for viewers.

"Real quick, Pete just your thoughts in 20 seconds, about 78,000 are dead, we understand how many got the virus and will. I get it," Kilemade said, as Media Matters reports. "But at the same time, can you get the military mindset with the masses of, take on the enemy because we have no choice — sitting on the sideline will destroy the country. How do you get the military mindset for the everyday American?"

"The military mindset is a patriotic mindset," said Hegseth, who once was on Trump's list to become head of the Dept. of Veterans Affairs. "It's what forged and founded this country. It is courage. We can be responsible, we can follow guidelines — while also reopening. We have to reopen, guys, right now, even in some of the more difficult places, or the livelihoods of people is going to crush more folks, or as many — I'm not talking in a statistical sense — as the actual virus itself. So, I think we can muster it. We've done it before, guys, and I think this is another chance to rise to that challenge."

That was the final moments of a five-minute segment pushing Hegseth's "Modern Warriors" special on Fox Nation focusing on "the reaction" to the coronavirus pandemic "as human beings," Hegseth explains (video below). Among his guests were U.S. Rep. Dan Crenshaw (R-TX).

Ironically, Hegseth says usually for this type of special the participants would "normally" be "around a table with a beer," but for this episode it was done "digitally." Hegseth, Kilmeade, and the other "Fox & Friends" co-hosts are all broadcasting from their homes or other remote locations due to the coronavirus.

"These guys went through crucibles," Hegseth says of his "Modern Warriors" guests, saying they confronted fear on the battlefield and now they're explaining to Americans "who are struggling with their everyday lives" because of the pandemic, how to confront their fears of the deadly coronavirus.

One of the Fox Nation veterans spoke of his military predecessors who would "rather die than quit."