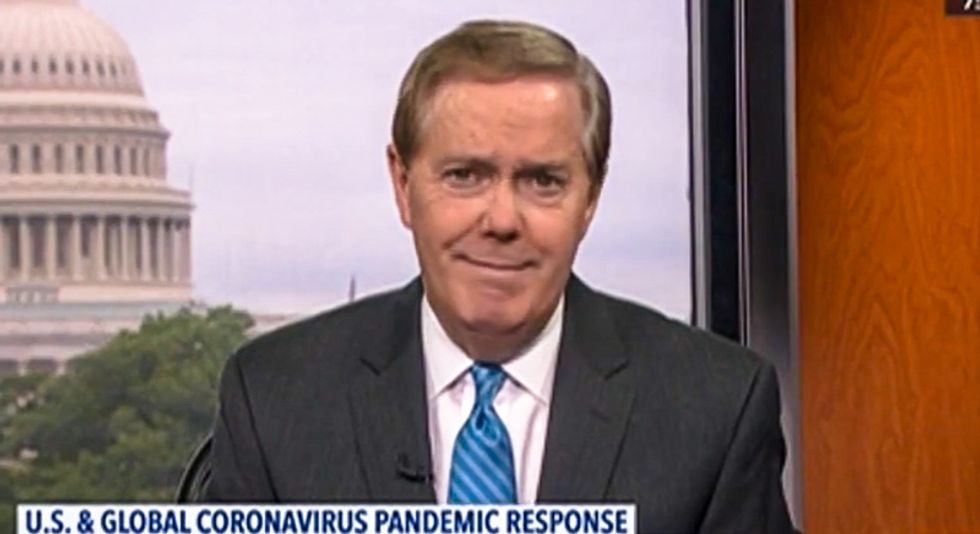 C-SPAN host Steve Scully on Sunday faced off against a caller who accused his network of being part of a liberal media conspiracy to spread disinformation about the novel coronavirus pandemic.

A man from Minnesota began his call to C-SPAN's Washington Journal by speculating that the virus was created in a laboratory -- although experts have said that it likely came from bats.

"I think you need to start getting some people on to answer true questions," Brad said. "And the true question is this. The question would be, is the corona-Chinese-Wuhan virus, is it a natural occurrence, which would be one thing or was it man-made?"

Scully pointed out that Dr. Anthony Fauci has said that the virus is not man-made.

"He doesn't know that!" Brad exclaimed before claiming that there are no infected bats near where the virus was first spotted.

"What's your source for that?" the C-SPAN host asked.

"Well, I can't source the actual paper that wrote it," the caller admitted. "It's a fact."

Brad then attacked the C-SPAN network for what he alleged were ties to other media outlets.

"You have to distance yourself from The Washington Post, The New York Times, MSNBC and CNN -- the true people that are controlling the Democratic Party," Brad insisted. "And you're part of it. And if you don't cut your ties, you're going to go right down with them too."

"Brad, we don't have any ties to The New York Times," Scully interrupted.

"I'll bet -- let me look at your financials and find out any gifts or anything you've ever gotten," the caller ranted.

"Zero," Scully said. "Brad, zero. We're funded completely by the cable industry. We've had zero dollars from any of those news organizations or networks."

"No," Scully remarked. "That's not true. Zero. For me and for this network. Not once."

"Can I look at all of your finances?" the caller said.

"Brad, what is your point?" Scully demanded to know.

"All I'm telling you is based on Dr. Anthony Fauci, who is the leading expert on this, has said that it's not man-made," Scully noted, repeating his earlier point.

"It absolutely is man-made!" Brad shot back. "I'll bet you any amount of money you want to bet that it's man-made."

Before the show was over, Scully faced another caller's conspiracy theory claiming cell phones are spreading the virus.

"Nobody is talking about how the virus is being spread," a woman calling from New York told the C-SPAN host. "I, for one, don't have a cell phone. I don't want to use anything wireless. And we don't know if this is reducing our immune system."

"Please, Steve, bring people on your program to talk about these issues," she added. "These wireless technologies have not been proven safe."

"Thank you for the call," Scully politely replied. "Of course, if you have a cell phone, the CDC is recommending that you wipe it down with an alcohol swab or soap and water or a cloth to keep it clean and to do so on a regular and repeated basis."