The Trump delusion: Comparisons of the president to historic leaders are a laugh riot 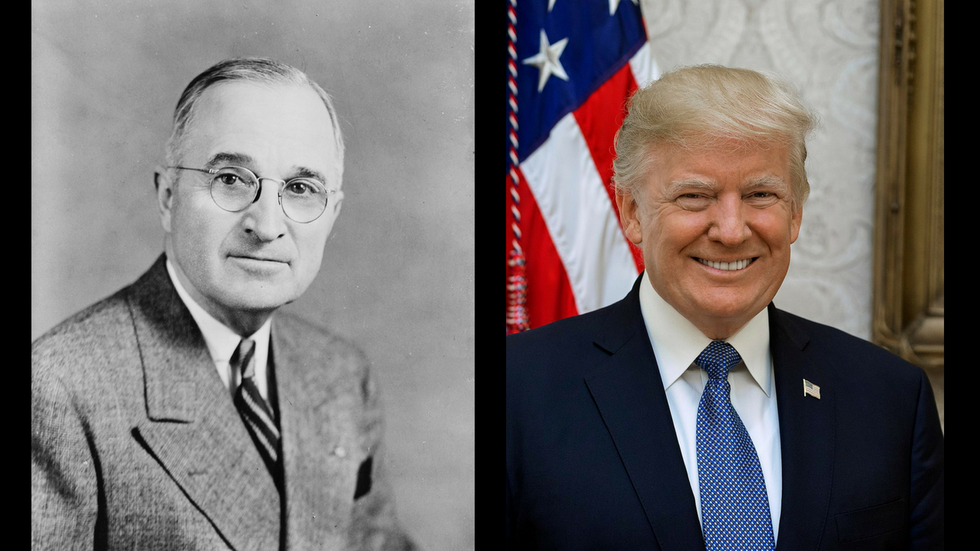 In this Age of COVID, there was a time long, long ago—about six weeks past!—when Donald Trump began referring to himself as “a wartime president."

He isn’t saying it much anymore. Maybe because his naptime was being haunted by the derisive ghostly laughter of Abraham Lincoln, Woodrow Wilson, Franklin Roosevelt and Harry Truman.

More likely, he or someone around him realized that calling himself a wartime president implied that he had to bear some responsibility for what’s happening, that the designation might cause others to call on him to show some actual leadership. Now he wants to get away from the notion as fast as his bone-spurred little feet will carry him.

Trump still compares himself to Lincoln from time to time, albeit usually to whine about how he thinks he’s been treated so much more badly than the 16th president—you know, the one who endured a great civil war and was assassinated. But in the past, he also has tried to manufacture heroic comparisons of himself with a true wartime leader, British prime minister Winston Churchill.

Such foolish aspirations were encouraged by former UK PM Theresa May, who even engineered a 2018 dinner honoring Trump at Blenheim Palace, Churchill’s ancestral home. And according to a 2017 New York Times article, “[E]very self-selected snapshot [of Trump]— down to the squinty-eyed scowl attached to his Twitter account—features a tough-guy sourpuss. ‘Like Churchill,’ is what Mr. Trump would tell staffers when asked what look he was going for.”

These days in Washington, you will see nothing like the famous “blood, toil, tears and sweat” that Churchill, people like Beaverbrook and so many others dedicated to their nation. Instead, there is distraction and obfuscation, the blame game, the dominance of selfish greed and indifference.

Some of his right-wing pals have egged him on with this delusion, including Jerry Falwell, Jr., Michael Savage ,and Mike Huckabee. But right now, especially hilarious is the publication of a new book titled Trump and Churchill: Defenders of Western Civilization, written by Nick Adams and published by Post Hill Press.

Adams, an Australian-born, right-wing commentator whose past works have been touted by Trump on Twitter, moved here in 2016, apparently on an Einstein visa, just like Melania! He since has made the usual rounds of the lecture circuit and various Fox News talk shows. Post Hill Press, its product distributed by Simon & Schuster, has a specialty in Christian and conservative books. Its other authors include Herman Cain and Dan Bongino, the self-styled expert in “owning the libs.”

A friend and colleague of mine received a Post Hill pitch letter for Trump and Churchill, and it makes for some choice reading: “In the book, [Adams] argues that Trump and Churchill both fought valiantly to protect Western Civilization, and while fighting different forms of tyranny, Trump could very well be to the twenty-first century what Churchill was to the twentieth. The way Trump has handled the coronavirus only proves this thesis more.

“Trump's policies before, and his reaction after the pandemic, make his leadership and response most Churchillian. Since the pandemic, he has been right every step of the way. He was right to restrict travel from China. Right about hydroxychloroquine. Right about the number of ventilators. Right about numbers receding when the warmer weather would begin.  Only difference is Churchill's war was outside; Trump's is within. Trump listens to his experts, but ultimately goes with his gut instincts (a Churchill trait). Both had to fight a vicious media during their fights with Axis Powers and The Swamp.”

Trump listens to experts? Has to fight a vicious media? And whoomp, there it is, good old hydroxychloroquine, Trump’s medication of choice, good for what ails you. Nonsense through and through. Comparing The Swamp to the Third Reich and its pals is especially rich. I’ll never forget the day when all the DC lobbyists goose-stepped down Pennsylvania Avenue and burned their second set of books.

True, Trump shares Churchill’s often mercurial behavior, his capricious and meddlesome nature, his bigoted views of non-Caucasians. (Locked in a colonial mindset, the prime minister reviled Indians and Palestinians, among others, and once mocked those who were opposed to the idea of “using poisoned gas against uncivilized tribes.")

That said, Churchill led Great Britain through World War II, a momentous time of history, and he did it against tremendous odds with determination, unflagging energy, skill and an uncanny ability to bolster the spirits of everyone around him. He did so without shirking responsibility; in fact, he embraced it.

This becomes especially clear and poignant with an altogether different new book about Churchill, Erik Larson’s The Splendid and the Vile. (The title comes from a diary entry of the indispensable John Colville, one of Churchill’s private secretaries. He described a London night of searchlights and anti-aircraft fire against a cloudless, starry sky: “Never was there such a contrast of natural splendor and human vileness.”)

Larson’s book covers the first year of Churchill’s prime ministry, from May 10, 1940-May 10, 1941, a time of tremendous danger. This was the time of Dunkirk and the fall of France, the Battle of Britain between the RAF and the Luftwaffe and the Blitz that devastated cities and countryside.

Churchill led a country enduring constant bombardment and the killing and wounding of thousands, with even more made homeless. Further, the population faced the ever-imminent threat of German invasion. Unlike Trump, who these days leaves the White House only to stage imitation campaign rallies disguised as official visits, Churchill went out into the towns devastated by German attacks, endangering his own safety, and strove to inspire survivors with his presence and rhetoric.

"Power in our American crisis, under a leadership so venal and incapable of governing or compassion, is a bludgeon wielded by a crazy man with no interests other than his own, aided and abetted by a party that became unmoored years ago."

Winston Churchill was decisive, believed in the value of research and science and was completely hands-on, dictating action memos he called “minutes” by the hundreds and quickly demanding answers and solutions. But he also knew how to delegate authority and trusted as much as he could the judgement of those he put in charge.

Today, we have a president who for fear of interfering with his corporate America ventriloquists has refused to fully invoke the Defense Production Act to produce all the materials necessary to effectively fight the pandemic. Churchill, on the other hand, appointed self-made media tycoon Lord Beaverbrook as Minister of Aircraft Production to step up the manufacture of the fighter planes and bombers so crucial to protecting Britain and taking the air war directly into the German homeland.

Beaverbrook, in Erik Larson’s words, “drew controversy the way steeples draw lightning.” He was despised by many and made enemies easily, ran roughshod over regulations, pushed exhausted workers and supply lines to the limits and trampled on the authority of other ministries. In the process, he resigned fourteen times, claiming exhaustion, ill health and ill temper.

Churchill always coaxed him back and he got the job done. Beaverbrook doubled fighter production in three months. Combined with the ultimate intercession of Franklin Roosevelt and the United States, it’s no overstatement that his work to keep the Royal Air Force aloft and in force—to the shock of Germany—saved Britain from capitulation. As Churchill famously declared of the RAF, "Never was so much owed by so many to so few.”

These days in Washington, you will see nothing like the famous “blood, toil, tears and sweat” that Churchill, people like Beaverbrook and so many others dedicated to their nation. Instead, there is distraction and obfuscation, the blame game, the dominance of selfish greed and indifference. As we reach and surpass 100,000 killed by COVID, we’re seeing in our country the same kind of attitude that Churchill and Roosevelt’s wartime ally Stalin endorsed when he’s reported to have said, “One death is a tragedy, a million is a statistic.”

Churchill said, “Power in a national crisis, when a man believes he knows what orders should be given, is a blessing.”  But power in our American crisis, under a leadership so venal and incapable of governing or compassion, is a bludgeon wielded by a crazy man with no interests other than his own, aided and abetted by a party that became unmoored years ago.

One last thing: Two months after Germany fell and just three weeks before Japan’s surrender, the British people had the good sense to vote the conservatives from office, believing that Churchill had made a fine wartime chief but was not the man to lead the peace. The Labour Party was believed better qualified to rebuild the country and restart its economy.  Although he would return as prime minister for an unsuccessful few years in the 1950s, Churchill was out.

Come November, we must do the same. Kick Trump out. Just make sure our hopeless but deadly dangerous man-in-charge can’t come back.

Michael Winship is the Schumann Senior Writing Fellow for Common Dreams. Previously, he was the Emmy Award-winning senior writer for Moyers & Company and BillMoyers.com, a past senior writing fellow at the policy and advocacy group Demos, and former president of the Writers Guild of America East. Follow him on Twitter: @MichaelWinship