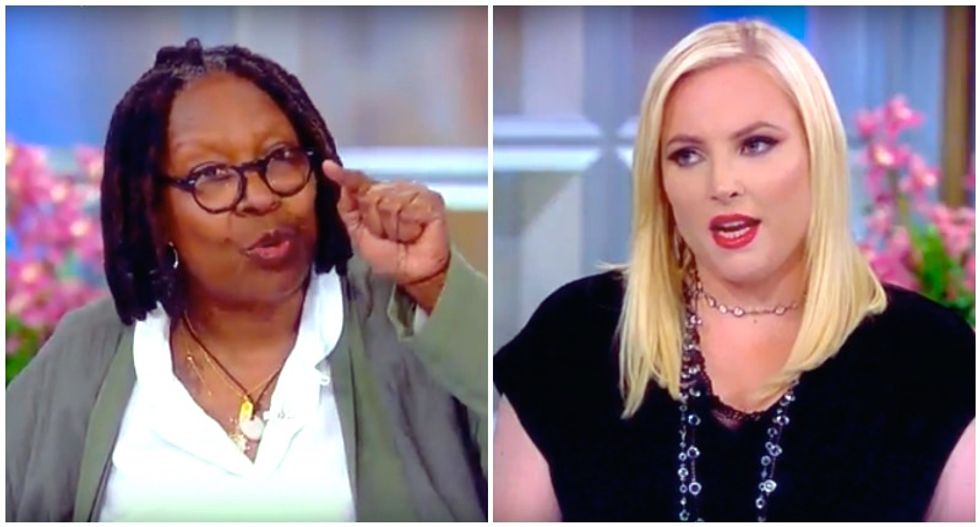 The conversation about reopening got heated on "The View" Monday morning when conservative co-host Meghan McCain claimed that there wouldn't be an economy if people don't go back to work so we can tax them.

The conversation began when McCain cited a piece from conservative columnist Peggy Noonan where it was a discussion about how flattening the curve became about finding a curve. Presumably, it came about once it became clear that the curve can't be flattened in the United States. Northeastern states like New York managed to seriously flatten their curve, other states, however, are still struggling with an uptick in cases. Now it's turning into a culture war of right vs. left as scientists urge caution, but President Donald Trump and his supporters are pressing to reopen to save his presidency.

Whoopi Goldberg said she agrees, "but it always turns into, other folks might be fine, you know, saying, 'I would rather do this than do that,' but then that puts everyone around them -- it takes their choice away."

Normally, personal responsibility touted by Republicans only extends to that individual person. In the COVID-19 world, someone's personal freedom can take away the lives and freedom of others.

Joy Behar recalled the days when she was struggling to get by and couldn't even afford to pay her rent, much less have a mortgage. She noted that Washington has been quick to bail out airlines, cruise industry, Wall Street, and other major corporations, but when it comes to a bailout of Americans, suddenly there was no money.

"It will help people with their mortgages. It will help people with these essential jobs," said Behar about the Democrats' new stimulus bill. "In the Senate particular, Sen. Mitch McConnell (R-KY) and Rep. Kevin McCarthy (R-CA) say that this is a liberal wish list. Why is it a liberal wish list? They have been very, very, what's the word? Enthusiastic about bailing out the banks, too big to fail. Corporations, airlines, give them all the money that they need, but the little guy, the poor guy who is on the front lines saving our lives, those people don't get help. I would suggest that everybody out there who hates the press and who is furious with everything and wants to go back to work, I suggest that you call Mitch McConnell's office, and you demand that they consider the Democrats' bill."

Sunny Hostin agreed, saying that even people struggling to survive don't want to risk their lives for a paycheck.

"I grew up very, very poor. My family lived paycheck to paycheck. Heck, I lived paycheck to paycheck until recently, and so the notion somehow that people want to sacrifice their lives, you know, rather than go back to work just doesn't make a lot of sense to me," said Hostin. "And it doesn't make sense that Republicans and the government are saying that there isn't enough money. Listen, you know, the rich keep on getting richer in this country. With 83 percent of those tax cuts that Donald Trump and his administration were so keen on giving went to the top 1 percent in our country. How dare they say now that there is not enough money to give to the people that are struggling? That is ridiculous!"

She went on to say that it was really the difference between the haves and the have-nots. "We have the money; we just don't seem to have the money to save these people," she said.

McCain cut in shouting it was "ridiculous" and saying it was a "Democrat wishlist."

Goldberg cut in, "let me just finish my point."

"No! It's a Democrat wishlist!" McCain shouted. "How are we going to tax people if there's no economy?"