Tolerance and violence: The fate of religious minorities during the plague under Christianity and Islam 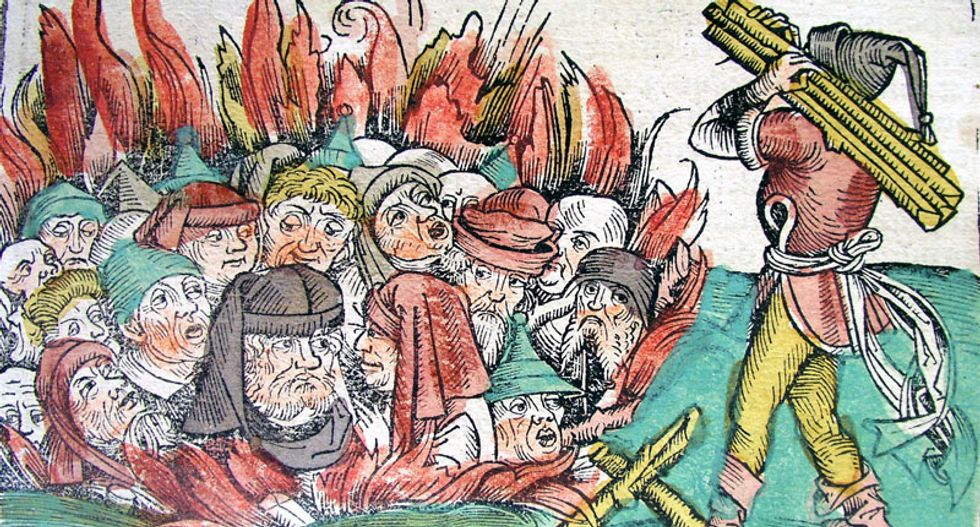 Pandemics are nothing new—they scythed through the ancient world as they did the pre-modern and, as we know to our grief and confusion, they are still mowing us down today.

We might think that human nature is fairly invariant across time and space, and expect the response to these catastrophes to be perennially the same. Certainly, in the 21st century there are disturbing echoes of the way Jews were blamed by European Christians of the 14th century for the Black Death. From the US to the UK, from Iran to Indonesia (the largest Muslim country in the world), there has recently been an escalation of abuse and violence against Chinese and Asian-looking people. And not just Asians. Political groups and politicians have latched on to coronavirus as a weapon in their anti-immigration policies, urging their partisans to hunker down and suspect the alien minority. In a bid for votes President Trump seems to be using coronavirus to whip up anti-Chinese feeling. In India, egged on by the BJP, the ruling Hindu nationalist party, Muslims have been viciously attacked and accused of conspiring to kill Hindus by deliberately spreading the disease.

But in equal measure we can see that rulers across time and space have given startlingly different responses to pandemics, depending on their religious, political and economic circumstances.

Take the Black Death. The plague swept through Christian Europe and Islamdom at roughly the same time--between 1347 and 1351. In Christian Europe, the bubonic plague, which probably originated in China, killed about 25 million; a deadlier strain, the pneumonic plague, which was in fact spread by particles in the air, killed about 75 million in Islamdom (Muslim Spain, North Africa and the Middle East). Like some ghastly laboratory experiment, the plague tested how both Islamic and Christian worlds responded to the same terrifying catastrophe.

The Christian world responded by turning on its usual scapegoat: Jews, ‘the sons of the crucifiers’. Reports spread that Jews were emptying little leather pouches of poison into the wells of Europe’s cities. Jews were rounded up in village and city squares–from Christian Spain through France and Germany to Holland—and burned in their thousands. It would be easy to blame the ignorant mob, but it was usually the secular and religious authorities—the city councils run by merchants and craftsmen, the great lords and dukes who ruled cities and territories, and the Holy Roman Emperor himself—who arrested Jews, initiated the tortures, presided over the confessions and ‘trials’ and organised the massacres. In Basel, Switzerland, 600 Jewish men and women were herded into a wooden barn and burned to death with the support of the prince-bishop; perhaps the worst massacre occurred in Strasbourg, France, where the bishop, his senior clergymen and the city guild authorised the rounding up of some 2,000 Jews and burned them to death.

To give him his due, Pope Clement VI condemned the conspiracy theorists, arguing that Jews were also dying of the plague, though actually, in lower numbers thanks to their religious cleansing rituals. But to no avail. More European Jews were killed during this time than at any other time until the Holocaust (there were no Jews to burn in England, because they had all been expelled in 1290).

By contrast, when bodies were piling up in the Islamic world and funeral corteges jostled each other in the streets, when 1,000 people were dying every day in Damascus (compared to 300 a day in London), the Mamluk authorities called on the city’s Christians, Jews and Muslims to pray and fast for three days. On the fourth day, the three communities of monotheists processed together barefoot out of the city gates to the Mosque of the Footprint where they spent the day chanting and praying together.

Of course there were outbursts of violence directed against Christians and Jews, but nothing on the scale of the violence exacted in the Christian world.

Judging by the standards of pre-modern Christendom, the Muslim world was astonishingly tolerant of its religious minorities. It had had to be, ever since Arab tribesmen conquered the Persian and most of the eastern Roman empires in the 7th century and began to build their vast Islamic empire. The Arab conquerors desperately needed the trade and administrative skills of the Christian, Zoroastrian and Jewish people they were conquering, and the result was a series of agreements, probably drawn up in the 7th century. The ‘Pact of Umar’, as it was called, was essentially a charter for tolerance, but it demonstrates why, even if tolerance is infinitely preferable to persecution, it is undesirable.

In exchange for being allowed to practise their religion without being killed, the dhimmis, the protected ‘people of the Book’, agreed that they would pay a special tax, the jizya. But even more importantly they agreed that ‘We [the dhimmis] shall show deference to the Muslims and shall rise from our seats when they wish to sit down’. Dhimmis could never build a house higher than a Muslim’s, nor be employed in a position of superiority over a Muslim. They had to wear clothes that distinguished them from Muslims—in the 9th century for instance, Jews and Christians had to wear an identifying yellow patch on their cloaks. In other words, as the caliph Umar I, said: ‘Humiliate them [the dhimmis] but do them no injustice’ . The Pact (strictly enforced by Muslim authorities in times of fear and crisis) became the model for the Muslim world’s policy towards its religious minorities, and is still so today in certain Islamic countries.

Tolerance was infinitely preferable to the massacres and persecutions inflicted on Jews in Christendom. Nevertheless, it is based on a relationship of the superior who puts up with (tolerates) the inferior. It is, in fact, based on dislike, ‘To tolerate is to insult’, as Goethe pointed out.

Not that the Islamic authorities, secular or religious, thought tolerance was praise-worthy. As in the Christian world, tolerance was frowned on: it encouraged heresy and its political sister rebellion. But it was a political necessity in the Islamic empire because of its multi-faith history. In the Christian world tolerance was not considered to be virtuous until Europe had been bled dry by a century of wars fought in the name of religion culminating in the Thirty Years’ War of the 17th century. Tolerance then became not just a political necessity but began to be seen, thanks to religious pioneers like the Rhode-Island founder, Roger Williams, as a quintessentially Christian virtue.

Christendom has, indeed, turned the tables on Islamdom. In the pre-European world Islamdom was the model of tolerance compared to Christendom’s shameful record of intolerance. Now the West prides itself on its tolerance - which it contrasts with Islamic intolerance. But, to repeat, tolerance is a questionable virtue.

Look, for instance, at the response to HIV/AIDS, known in the 80s as ‘the gay disease’. In 14th century Christendom gay men would have been burned at the stake; in the 20th century West (except for a handful of religious fundamentalists who saw AIDS as God’s punishment on homosexuality) gay men were just about tolerated. But they were not accepted, nor treated as the equals of heterosexuals—one reason perhaps why the search for a cure for ‘the gay disease’ took a low priority despite the carnage it wrought. It took vigorous campaigning to move AIDS up the political agenda.

So have our authorities done any better with this latest pandemic?

Compare how virtually the whole of the world has responded to this killer epidemic with the way we reacted to the Hong Kong flu in 1968. Scarcely remembered now, that flu killed 100,000 people in the US; 1-4 million worldwide. There were no lockdowns - who knows how many lives could have been saved if there had been. But this time around, the world has done a remarkable thing. Across the world from West to East and North to South,, no matter what the majority religion of the country, many of our rulers have actually reacted in the same way to the same catastrophe. They have shut down our economies in order to save lives. The scapegoating still goes on of course. We still have our anti-immigrant nationalists, our jihadists who are using the blame card for all it is worth—scapegoating immigrants, Muslims, Jews, in the case of some Iranian and jihadist fanatics, or the decadent West. Yet, as President Macron of France said in a recent interview with the Financial Times, ‘we have half the planet at a standstill to save lives. There is no precedent in history.’

Even if other, less altruistic, factors are also at work, the fact is that our countries from the US to Abu Dhabi, are throttling the economy to save lives.

Collectively we have shown that we value our humanity - far more than our economic order and wealth. We have shown that we are capable of moving beyond the terrors of blame, and the humiliations of tolerance towards a better world where everyone’s life is valued - including the lives of the elderly, often the least valued people in the West.

Selina O’Grady is the author of  In the Name of God: The Role of Religion in the Modern World: A History of Judeo-Christian and Islamic Tolerance, Pegasus, June 2020. She is also the author of  And Man Created God: A History of the World at the Time of Jesus, St Martin’s Press and Picador.