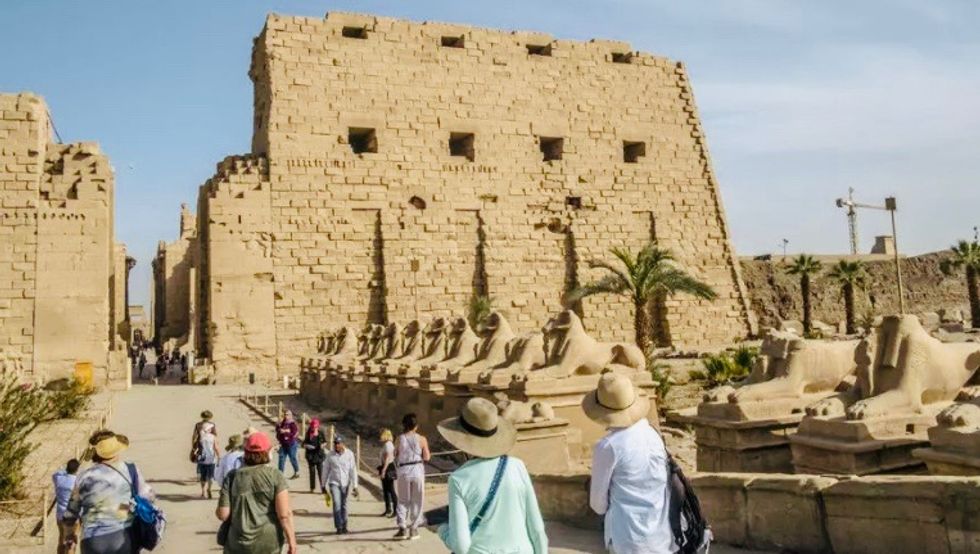 In a bustling square of Egypt's capital, four sphinx-like statues stand in wooden crates ahead of a planned unveiling ceremony following their controversial transfer from historical sites.

With the bodies of lions and heads of rams, the statues had for millennia graced Karnak temple in the southern city of Luxor representing the ancient Egyptian god "Amun".

This month, the restored sandstone statues were moved to Cairo's landmark Tahrir Square, the epicenter of a 2011 popular uprising that toppled longtime ruler Hosni Mubarak.

"I am against the moving of Luxor monuments. I was especially saddened by their relocation," legislator Ahmed Idris from the city told AFP.

"Luxor has long been like an open museum which should be developed and its monuments' historical value are tied to the city," said Idris.

The statues will be the square's centrepieces, along with a 19-meter-tall (60-foot-tall) pink granite obelisk of the famed Ramses II.

The 3,000-year-old obelisk -- of Ramses II facing an ancient deity as well as inscriptions of his titles -- was moved from a Nile Delta archaeological site.

The relocations which came as part of government plans to renovate Tahrir Square have drawn wide criticism from archaeologists and activists.

Some petitioned President Abdel Fattah al-Sisi to stop the transfer.

Others including lawyers from a rights group filed a lawsuit citing a 1964 Venice Charter on the conservation and restoration of monuments, saying the move could "jeopardize the priceless artefacts".

Egypt signed the charter, adopted by UNESCO, in 1974.

It stands a short stroll away from the Egyptian Museum, a tourist magnet which holds a vast collection of precious relics.

A staging ground for major protests in Egypt, the square has undergone multiple phases of renovation since the 2011 uprising.

Its renovation plan includes unifying building facades, removing street advertisements and an overhaul of its lighting.

In December, Sisi said the transfer of artefacts would add "a touch of civilization" to the site.

But fears have grown over possible damage to the monuments.

"The high pollution in Tahrir Square will ruin the antiquities and accelerate their deterioration," Egyptologist Monica Hanna said in a Facebook post in December.

"A monument's value is diminished when removed from its original historical context and becomes an ornament rather than a monument," she said.

Egyptian architect Ayman Badr has said the square does not need "to be adorned with historical elements" as it "already holds historical value".

Antiquities and Tourism Minister Khaled al-Anani has dismissed warnings that the monuments could be vandalized or be affected by pollution.

"No-one will be able to touch them. They will be placed on a high pedestal and surrounded by a water fountain," Anani told a private television channel in March.

He said they would undergo regular restoration and maintenance.

The statues were not among those lined up on the famed Kebash (rams) avenue linking Karnak and Luxor temples, according to the minister.

Mahmoud Zaki, a tour guide from Luxor, also sided with those defending the transfers.

"We exhibit artefacts abroad for foreigners to enjoy... and now it's a great honor that antiquities from Karnak temple adorn Egypt's most popular square," he told AFP.

An unveiling ceremony is planned but an official date has yet to be announced.

"It's nonsensical that (Egyptian) obelisks could be found in public spaces across the world and none of them stands in Egypt's most popular square," said antiquities expert Ali Abu Deshish.

Fox News and Fox Business, both created by Rupert Murdoch, have never been shy about promoting extreme or ludicrous ideas in the hope of driving ratings. But what far-right opinion hosts like Tucker Carlson, Laura Ingraham and Sean Hannity claim and what Fox News executives actually believe can be two different things, and an article published by Vice on September 23 stresses that Murdoch's actions show that he takes climate change seriously.

It's important to pay close attention to what Fox News does as well as what it says. Fox News has been full of anti-vaxxer hysteria; yet more than 90% of Fox Corporation employees, according to The Guardian, have been vaccinated for COVID-19. Fox Corporation, CNN reports, has "quietly implemented the concept of a vaccine passport."

Donald Trump blasted Sens. Lindsey Graham, R-S.C., and Mike Lee, R-Utah, on Wednesday, telling the Republican lawmakers they should be "ashamed" of not showing him enough fealty during his ceaseless campaign to overturn President Biden's 2020 election win.

"I spent virtually no time with Senators Mike Lee of Utah, or Lindsey Graham of South Carolina, talking about the 2020 Presidential Election Scam or, as it is viewed by many, the 'Crime of the Century,'" Trump wrote in an email blast. "Lindsey and Mike should be ashamed of themselves for not putting up the fight necessary to win," the former president continued.