Figures in the right-wing media ecosystem have been patiently waiting for what they surely believe will be massive bombshells from Attorney General Bill Barr’s probe of the origins of the Russia investigation. And Barr has knowingly whetted their appetites, offering a series of teases suggesting that he and U.S. Attorney John Durham are uncovering some nefarious plot against President Donald Trump, despite the Justice Department rules against discussing ongoing investigations.

As I’ve argued before, it’s clear that Barr sees his role as, in part, defending Trump from the negative media coverage generated by the Russia investigation. And it’s becoming clearer each day that, as I’ve long suspected, Barr anticipates and perhaps intends for the Durham investigation to benefit Trump electorally.

Asked directly last month if he would be cautious about making overt moves around the Durham investigation in the run-up to the 2020 election, Barr dismissed the concerns.

“The idea is you don’t go after candidates,” Barr told Hugh Hewitt in April. “You don’t indict candidates or perhaps someone that’s sufficiently close to a candidate, that it’s essentially the same, you know, within a certain number of days before an election. But you know, as I say, I don’t think any of the people whose actions are under review by Durham fall into that category.”

In other words, Barr is completely open to releasing major findings of the probe in a way that might influence the 2020 election.

Fred Wertheimer, in a guest post for Just Security, pointed out that Barr is just wrong about the DOJ’s policy:

The Mukasey, Holder, and Lynch memos state that politics must “play no role” in prosecutorial decisions and that prosecutors may “never” use the timing of criminal charges to affect the election. There is no provision in these memos that limits the election-year policies just to investigations of candidates or their close aides, or that gives the attorney general the power to make a judgment in each case of whether to follow the policies or ignore them.

Barr is misrepresenting the department’s longstanding policy, just as he misrepresented the Mueller report, in an attempt to give himself license to do precisely what well-established DOJ policy and past Republican and Democratic attorneys general have treated as improper conduct.

The fact that Barr is misrepresenting this policy suggests that he does, in fact, intend to violate it. He’s already repeatedly violating the policy about discussing an ongoing investigation publicly, so there’s no reason to believe he wouldn’t use a criminal investigation to influence an election. In fact, despite his frequent complaints that Trump has been wronged by the attention paid to investigation that never resulted in charges against him, Barr wrote an op-ed defending former FBI Director James Comey’s decision to announce the re-opening of the Hillary Clinton email investigation in the days before the 2016 election.

The Comey letter likely cost Clinton the race. Trump and Barr almost certainly know it, and the attorney general may well think he can duplicate Comey’s result.

Trump is clearly on board with this idea. I doubt that they would be so explicit as to collaborate directly in such a scheme, but they don’t need to; the messages being sent and the alignment of their interests are plain for everyone to see. Barr has been whipping up the right-wing masses with his shabbily manufactured reason for dismissing the charges against Michael Flynn and the release of the “unmasking” records related to the Obama administration. The latter, too, is a clumsily contrived scandal, but it has successfully worked the right-wing talking heads into a lather.

And while this is going on, Trump is using his Twitter megaphone to repeatedly scream the word “OBAMAGATE,” which revolves around some kind of ostensibly criminal allegation that he has yet to define. Many have argued, quite plausibly, that this is a sign of desperation. The economy is tanking, the pandemic is still raging, and Trump doesn’t know how to solve either problem. So he’s just going to revert to his reason for being in politics: attacking Obama with nonsense.

But will any of this actually work to benefit Trump’s re-election? So far, it seems unlikely. Barr’s pronouncements about Durham’s investigation remain extremely vague, despite the length of the probe. The supposedly bombshell findings in the Flynn case and in the unmasking records turn out to be innocuous under even cursory inspection. Perhaps some damning evidence about something is lying beneath the surface, but nothing that has occurred thus far vindicates the hype. (A more nefarious possibility is that Barr or someone in DOJ might actually fabricate an allegation or selectively leak a genuine piece evidence in a highly manipulative way.)

Putting aside the dearth of material, though, it’s hard to see how Trump is holding a winning hand. The pandemic and the recession are at the top of everyone’s minds right now, and they will continue to loom large in November. It’s hard to imagine that these factors, and the candidates’ respective abilities to cope with the problems, aren’t absolutely decisive on Election Day. The game of Spy vs. Spy, the debates over collusion and the origins of the Russia probe, and the intricacies of U.S. intelligence policy — none of these issues are likely to be of much interest to voters who may have lost loves ones, jobs, or both.

If anything, spending any time reminding voters about the Russia probe and surrounding questions may hurt Trump, even if he thinks the revelations make him look good. Regardless of the substance, just the word “Russia” is a reminder of the chaos of his administration, a chaos that was absent when Biden was last in the White House.

To assess my hypothesis here empirically, we can look at the period in time in which Trump probably had the best bout of Russia-related news of his entire presidency. This was after Barr released his letter summarizing the Mueller report on March 24 — announcing that the probe was done and no more charges were coming — but before the report itself was released. In those few weeks, Trump was riding a wave of Barr’s positive spin. Conspiracy charges were officially off the table, and Mueller’s damning analysis of the president’s obstruction of justice was still under seal.

But according to FiveThirtyEight’s tracker, Trump’s approval remained extremely stable during that time. He got no approval bump, despite the PR success: 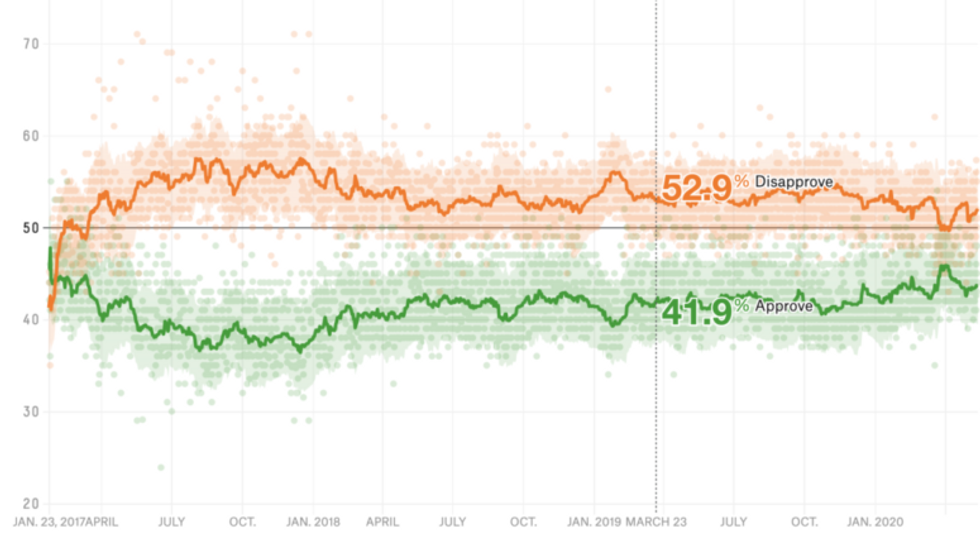 This reflects a belief many argued for during the run-up to the 2018 election. Whatever you think about the Russia investigation and its importance, there was never much indication it was driving voter behavior. Whatever effect the story has had is likely already baked in, and new revelations aren’t likely to push the needle.

So Barr and Trump might be betting on their marketing skills to sell some new revelations about the Russia probe origins as a reason to keep him in office. But there’s little chance the voters will buy it.