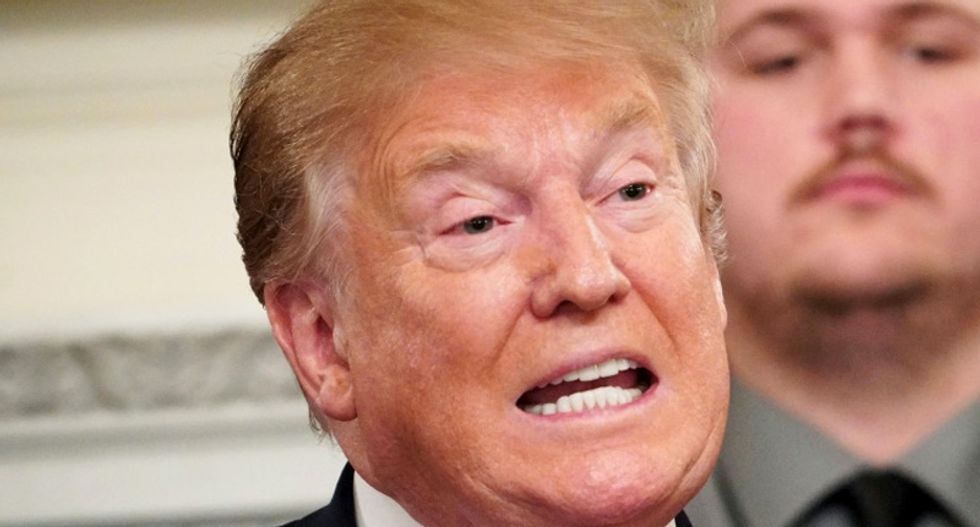 We are in the midst of public health crisis unlike any other we have faced in our lifetime, and President Trump has been all over the lot in how to approach the problem. On March 13, he said: “I don’t take responsibility at all.”  On April 13, a month later, he declared: “I have the ultimate authority” to order states to relax social distancing to combat the coronavirus outbreak and reopen their economies. He went on to claim his authority in this regard was “total.” He warned that governors who refuse would face political consequences.

Asked what provision of the Constitution gives him the power to open or close state economies, Trump said: “Numerous provisions. We’ll give you a legal brief if you want.” Most lawyers would have difficulty writing such a brief or finding the “numerous provisions” the president was unable to elaborate.

Trump’s position raised some conservative eyebrows. Traditionally, Democrats have favored a strong central government, while Republicans, fearing socialization and the abuse inherent in a centralized infrastructure, have favored states’ rights. As Ronald Reagan put it, the “government is not the solution to our problem, government is the problem."

On April 16, Trump switched positions and said not he, but the governors would “call the shots,” even though he claimed, as reported in The Hill, that  he had the authority to “overrule” them.

Finally, in an April 17 tweet, he undercut the Democratic governors of Michigan, Minnesota and Virginia by issuing a clarion call to anti-lockdown citizens, in many cases suspiciously organized by pro-Trump conservative activists,  to “liberate” their states (and, in the case of Virginia with a reference to the Second Amendment, even by force of arms). Such statements implicate Title 18, U.S.C. § 2385, which criminalizes conduct that advocates and advises the overthrow of a state government by force and violence. Conservative undermining of what the governors are trying to do to save lives and end the spread is exemplified by the demand of firebrand Republican Congressman Jim Jordan of Ohio that governors continuing the lockdown should be “investigated.” Indeed, Attorney General William Barr, who thinks Americans should not be “hiding under their bed,” has threatened legal action against the governors for civil rights violations, stating that stay at home orders are “disturbingly close to house arrest.” Well, as Hamlet said, “the devil can cite scripture for his purpose.”

Trump understandably, like most Americans, wants to re-open the country as soon as possible. But his priorities are political, social and economic, and if he gets his way to the exclusion of everything else there will be needless loss of life. Even with this in mind, it is sheer lunacy to prevent the governors from doing the very job he asked them to do. He has unduly politicized the issue of authority. By deferring to the governors, he can opportunistically blame them if they open too early, and there is more spread, more deaths, and more lockdown. But, if the governors succeed, he can cast himself in an election year as the “recovery president,” whose May 1 program for “Opening Up America again” (sound familiar?) turned out to be a great success or, to use one of his favorite adjectives, “perfect.” Governors are split in their approach to reopening with the cleavage largely along party lines. Republican governors are swiftly moving to reopen key sectors; Democrats are moving more slowly. States and cities may have different rules — a reflection of how many new cases are on the ground, as well as demographic and political fault lines.

There is of course a downside in a national crisis of leaving it all to the locals. The central government must work closely with the states to achieve workable rules for regions and industries based on reason, and as much as Trump dislikes it, the science. Resources must be allocated fairly in accordance with need, not politics. Contrary to what Trump says, he must indeed be a kind of “shipping clerk,” not “President Bountiful,” distributing political largesse only to the grateful and the faithful.

Trump has been politically opportunistic in another area as well. The crisis feeds his xenophobic position that immigrants have taken jobs away from Americans and constitute a burden on social services, a position belied by the impressively low unemployment numbers he gloated about before the coronavirus became more serious than the common cold. In addition, the burden of prohibiting foreign workers in the United States will not fall on the foreigners so much as on the small business employers in the United States, who rely on such workers for their survival. Here, he must tread lightly. Immigrants are numerous in essential occupations ranging from physicians to healthcare workers to pharmacists. So, by executive order, he proposes to bar new immigrants to the country, even if they are family members of U.S. citizens. The proposed order, as now appears, will only reaffirm what is already in place.  As the Wall Street Journal points out, “even without an executive order, the administration has already all but ceased every form of immigration.” The proposed order will inevitably have some notable exemptions: temporary residents on green cards, high-skilled foreigners here on three-year visas who come to work, and migrant farm workers.

The founders of our country were wisely suspicious of a strong central government. The 10th Amendment to the Constitution reserves for states all powers that aren’t specifically granted to the federal government. Chief Justice John Marshall in Gibbons v. Ogden (1824) recognized an “immense mass” of lawmaking power, where states retain primacy, “not surrendered to the federal government.”  His examples were “inspection laws, quarantine laws, and health laws of every description.” Constitutional lawyers call this residuum of sovereign power the police power.

Congress has given the president has broad powers in the case of a pandemic. Under the Public Health Service Act, he can prevent spread of communicable disease from “one state…into any other state.” Under the Defense Production Act, he is authorized to accomplish “emergency preparedness,” and  “critical infrastructure protection and restoration.” The Supreme Court has said that when the president acts to carry out broad authority delegated to him by Congress, he is at the  “high-water mark in the voluntary surrender of liberty.”

But, those powers are limited by the states’ police power.  Trump better get his signals straight. There is too much at stake, and we cannot become a failed dysfunctional state.  L’état c’est moi went out with Louis XIV. And certainly not where we have at latest count upwards of 800,000 cases and close to 45,000 deaths.

State and local governments are where the rubber meets the road in deciding when and how to reopen the country. When can we reopen the schools, surely a major priority? Until we do, how can Americans begin to go back to work? When will we have tested an adequate sampling of the population to reach a conclusion in which the public can have confidence? All questions for the governors and mayors throughout the country.

Will we all be at the Super Bowl next February in Tampa? Perhaps a sobering idea, but that will be up to Governor DeSantis of Florida.

James D. Zirin, a lawyer, is the author of the recently published book, “Plaintiff in Chief: A Portrait of Donald Trump in 3500 Lawsuits.”