Trump-loving anti-lockdown activist ready to start killing: ‘The only good Democrat is a dead Democrat’ 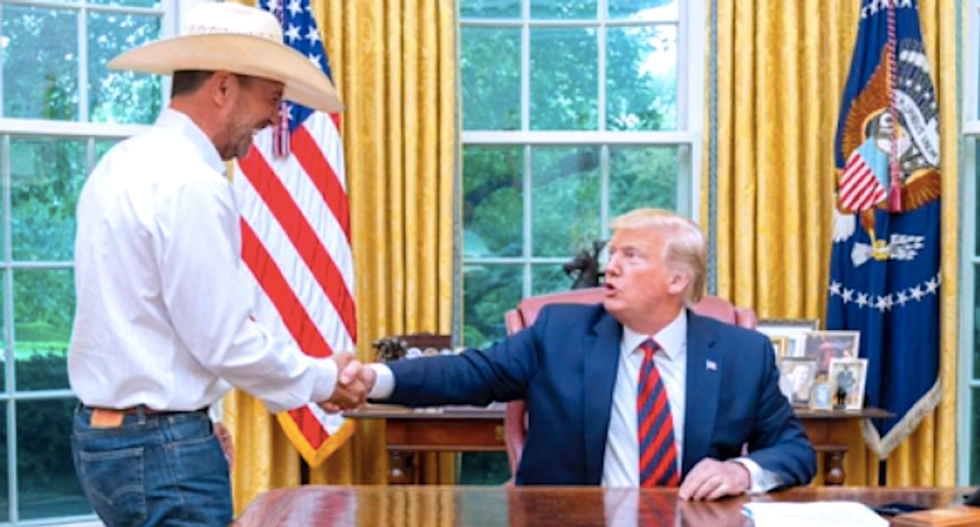 Couy Griffin, an anti-lockdown activist who is also the head of the "Cowboys for Trump" organization, is publicly calling for Democratic governors to be killed for purportedly committing "treason."

In an interview with The Daily Beast's Will Sommer, Griffin defended telling fellow activists at an anti-lockdown rally that "the only good Democrat is a dead Democrat."

"You get to pick your poison: you either go before a firing squad, or you get the end of the rope," he said. "I’ll tell you what, partner, as far as I’m concerned, there’s not an option that’s not on the table."

Sommer reports that Griffin's homicidal rage is becoming more common among anti-lockdown activists, despite the fact that lockdown restrictions are easing across the United States.

"On Sunday, anti-lockdown protesters in Frankfort, Kentucky, hung an effigy of Democratic Gov. Andy Beshear from a tree outside the state capitol. The effigy bore Beshear's face and a message: 'Sic Semper Tyrannis' ['Thus Always to Tyrants']," he writes. "In North Carolina, prominent anti-lockdown activist Adam Smith posted a Facebook Live video on Friday saying he and other activists were 'willing to kill people' over coronavirus restrictions."

"Thus Always to Tyrants" was what John Wilkes Booth said as he assassinated President Abraham Lincoln in 1865.