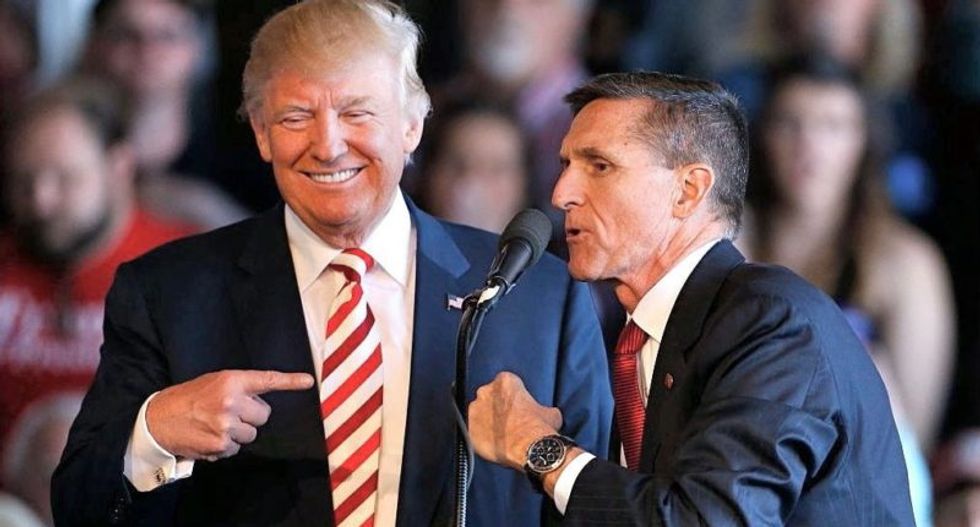 President Donald Trump claimed sweeping vindication Friday over the Russian election meddling investigation that he has long branded a hoax and a witch hunt, after the Justice Department dropped its prosecution of his former national security advisor Michael Flynn.

Attorney General Bill Barr's deeply controversial declaration that there were never grounds to pursue Flynn, a central target in the Russia investigation, and that the FBI abused its powers, drew outrage across much of the legal community.

But it delivered to Trump a powerful victory in his three-year campaign to convince Americans that the probe was a political inquisition designed to delegitimize his presidency.

"Most people knew from the beginning, and they knew it was just a total hoax. It was a made-up story, a disgrace to our nation," Trump told Fox News.

Coming six months before he stands for reelection, Barr's move offered powerful ammunition that Trump indicated he would use against his Democratic opponent Joe Biden, who was vice president under president Barack Obama when the original FBI investigation began in July 2016.

"These are dirty politicians and dirty cops and some horrible people. And hopefully they're going to pay a big price some day in the not too distant future," Trump said of all those involved in the Russia probe.

"If anyone thinks that (Obama) and Sleepy Joe Biden didn't know what was going on, they have another thing coming" he said.

"I believe he and Biden... (were) involved in this all, very much."

By closing the case on Flynn, Barr was plunging a knife into the heart of the justification for Special Counsel Robert Mueller's investigation into alleged Trump campaign collusion with Russia.

When completed, Mueller detailed numerous contacts between the Trump campaign and Russia which suggested collusion but did not add up to a crime.

Mueller's probe, which led to convictions or guilty pleas by five other trump associates, had cast a cloud over Trump's 2016 upset election victory and riveted the nation for two years.

Mueller detailed nearly a dozen acts of alleged obstruction by Trump, but his report neither exonerated the president nor concluded he had committed a crime.

But Barr, who was appointed attorney general in 2018 after supplying legal arguments to the White House against the Mueller investigation, declared that Mueller found no actionable wrongdoing.

By then, though, Flynn had already pleaded guilty to one count of lying to the FBI over his Russia contacts, and was facing sentencing.

The court had heard substantial evidence about his secret talks in December 2016 with Russia's envoy to Washington to discuss deals that would undermine then-president Obama's policy toward Moscow.

Yet in a nearly unheard-of reversal, on Thursday the Justice Department told the federal district court in Washington that Flynn's guilty plea was moot, because the investigation was not justified to begin with.

"Our duty we think, is to dismiss the case," Barr told CBS News.

"A crime cannot be established here. They did not have a basis for the counterintelligence investigation against Flynn."

Despite the evidence amassed by US intelligence and Mueller, Trump never accepted that Russia interfered to help him in 2016 and that he or his staff should have been investigated.

"You look at Mueller, that was purely corrupt," Trump said of the special counsel, a former FBI director.

Trump declared victory on Friday, as he did earlier this year following his Senate acquittal after being impeached on separate charges related to Ukraine.

In a joint comment on the Lawfare website, legal experts called the Flynn move "astonishing", "bizarre", and "dishonest," noting it was the second time in two months that Barr upended one of the remaining Mueller prosecutions.

Former FBI Deputy Director Andrew McCabe, who oversaw the Russia investigation, said Barr's move "has nothing to do with the facts or the law -- it is pure politics designed to please the president," he said.

The Democrat-led House Judiciary Committee called Friday for an investigation of Barr's "politicization" of the Justice Department.

Americans "deserve a department that is guided by the facts and the law, and not by the president's political interests."

But conservative Berkeley law professor John Yoo wrote that dropping the Flynn prosecution was necessary to help clean up the FBI and Justice Department.

Yoo called it "an important step in restoring control over a law enforcement agency that believed it had a right to pick and choose who were acceptable leaders for our nation."

‘Rudy is really hurt’: Giuliani found out he’s been banned from Fox News the night before 9/11 anniversary

Rudy Giuliani and some other senior aides to Donald Trump have been banned from Fox News.

The former Trump lawyer and New York City mayor hasn't appeared on the conservative network for almost three months, but he learned of the ban the night before Sept. 11, when his scheduled appearance on "Fox & Friends" to mark the 20th anniversary of the terrorist attacks was cut and host Pete Hegseth called to apologize, reported Politico.