Trump slammed for taking ‘victory lap’ after more than 60,000 COVID-19 deaths and no end in sight 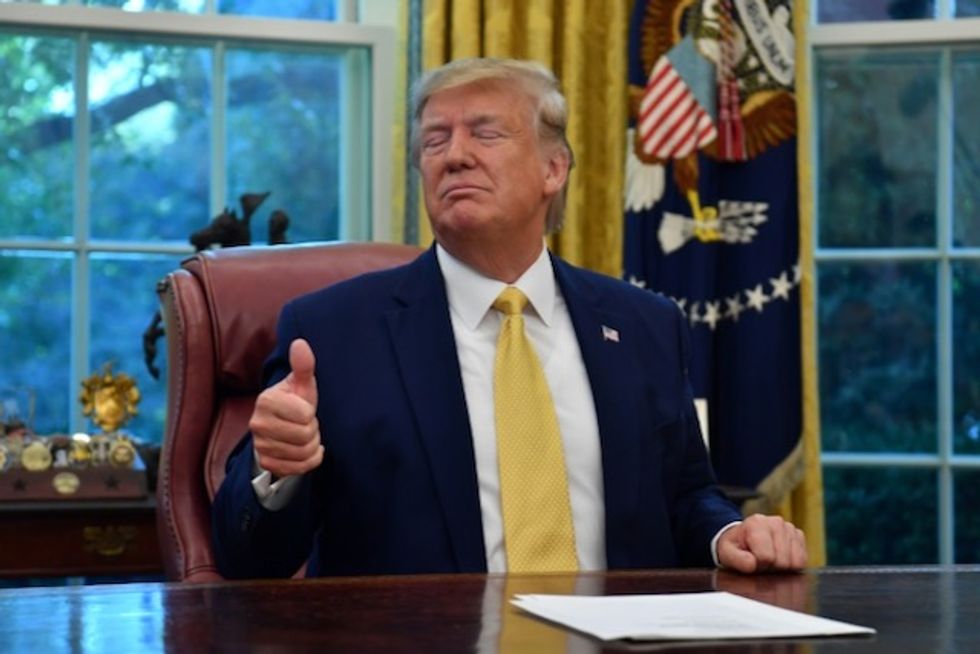 On Saturday, writing for The Atlantic, staff writer David Graham excoriated President Donald Trump for treating a 60,000 death toll for the coronavirus pandemic as something to celebrate.

"'Nothing would be worse than declaring victory before the victory is won,' President Trump said on March 29. It was a moment of clarity and wisdom, the sort of sober leadership the nation seeks from a president in times of crisis," wrote Graham. "And it was swiftly forgotten. A month later, Trump and his aides were ready to hang MISSION ACCOMPLISHED banners from the Eisenhower Executive Office Building."

"'The worst of the pain and suffering is going to be behind us,' Trump said Wednesday. 'We think we really have passed a big boundary. Much better days are ahead,'" noted Graham. "During the same press availability, he boasted, 'We did all the right moves … If we didn’t do what we did, you would’ve had a million people die, maybe more. Maybe 2 million people die. And if you think that we’d be at 65 or 70 or 60 or whatever the final number will be—one is too many. I always say it: One is far too many.'"

"The U.S. is ... the leader of the world—in total COVID-19 deaths, to choose one metric," wrote Graham. "It also leads other developed nations in the growth of its death rate. Trump is not responsible for all of those deaths, no matter how shaky the federal response has been, but his premature declarations of victory at a time when the situation is manifestly dire are jarring. They demonstrate a lack of empathy that has dogged Trump in past crises."

"This empathy gap is not a problem merely of political fortunes, but of material results," continued Graham. "For leaders to solve a problem, they have to convince people they understand it. Trump’s inability to understand the depth of human suffering in the pandemic has slowed his response at every turn and hobbled his ability to rally the resources needed to address the crisis."

Compared to Reagan's somber speech in the wake of the Challenger disaster or Roosevelt's statements of resolve after Pearl Harbor, Graham wrote, Trump's declarations of success ring hollow and worthless.

"As the United States faces the greatest crisis since World War II, armed protesters are running amok in state legislatures, the president is feuding with governors, and public-health measures have become political footballs," wrote Graham. "It didn’t have to be this way. Americans are willing—desperate, even—to be inspired. A steady leader could bring the nation together to face the immense challenge ahead. But Trump is too busy taking a victory lap. One might even say that nothing could be worse than declaring victory before the victory is won."