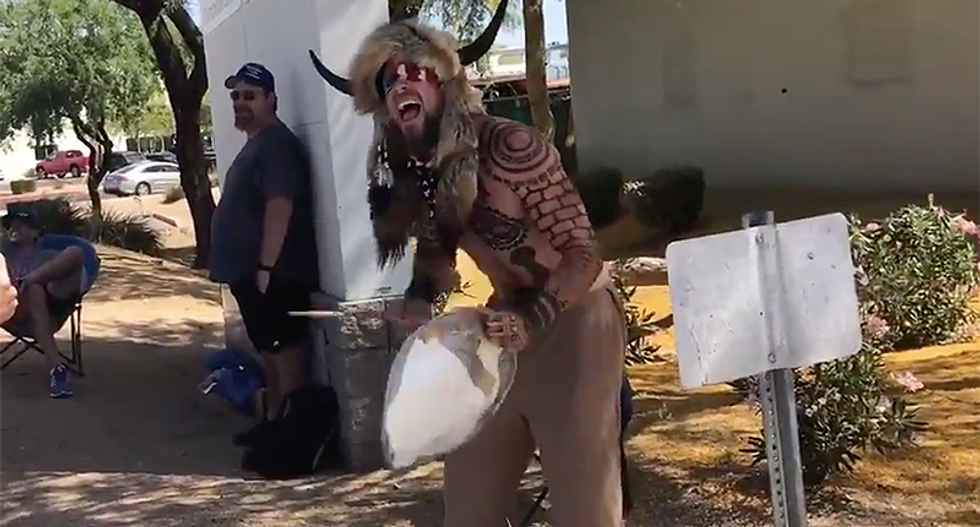 President Donald Trump headed to Arizona Tuesday to tour a Honeywell factory where they are making N95 masks, but some of his supporters were disgusted by reporters wearing masks ahead of the visit.

According to BrieAnna J. Frank at the Arizona Republic, one man approached them to say that wearing a mask is an example of “submission," though he didn't clarify to whom.

"It’s muzzling yourself, it looks weak - especially for men," the man told them.

"We’re being accused of fear-mongering, not knowing anything and being 'pieces of shit,'" said Frank.

She noted that the man began asking her a series of questions that she refused to engage. He then turned to an older male reporter and asked "I'm sure you know, but I doubt she does. What are you, 2-3 years out of college? What business do you have writing the news?"

“You’re on the wrong side of history," a woman can be heard shouting.

“You’re on the wrong side of patriotism - you’re like communists,” said a man.

A man wearing horns and body paint then yelled a "thanks" to President Donald Trump and to "Q," a reference to the Q Anon conspiracy theory.