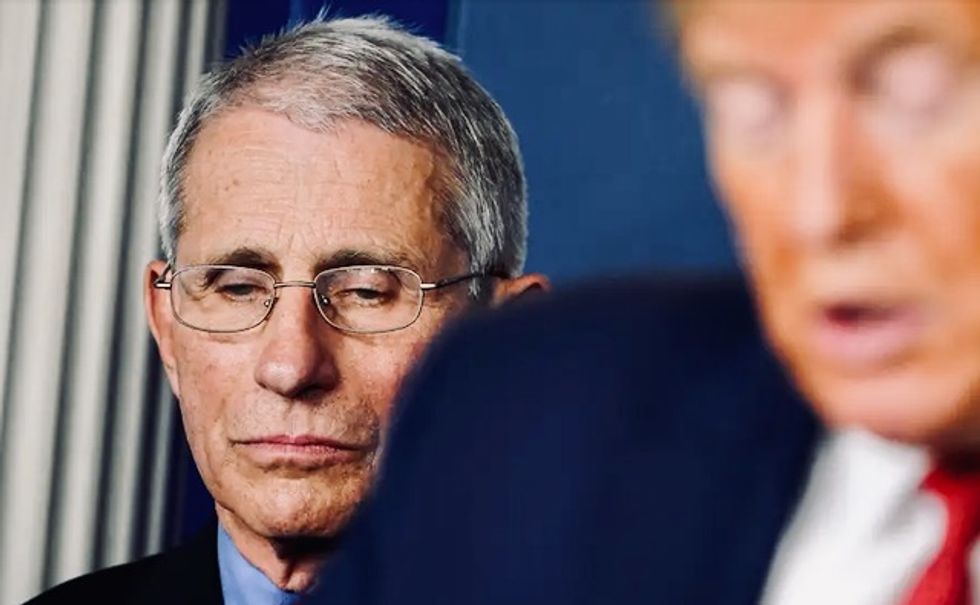 Just a month ago, I predicted that Donald Trump and his lickspittles in Congress and right-wing media were setting up Dr. Anthony Fauci as their scapegoat for Trump's massive failures. (That admittedly wasn't difficult, since the far right has been attacking Fauci all along.) Now here we are, with the death toll from the novel coronavirus soaring past 83,000 and the unemployment rate at 15% (and likely closer to 20%) and, sure enough, some of the worst Trump flunkies are looking to blame the sober-minded infectious disease expert who's been working tirelessly on the coronavirus problem, despite having the worst possible boss imaginable.

Some on the right, in their ludicrous efforts to depict Trump as blameless (and almost hapless), are painting Fauci as an all-powerful mastermind who is somehow controlling the government against the president's will — and even suggesting he's faking the scientific understanding of how contagious the coronavirus is.

On Tuesday, Fauci testified before a Republican-controlled Senate committee — after Trump blocked him from appearing before a committee in the Democratic-majority House — and Sen. Rand Paul of Kentucky did his best to paint the head of the National Institute of Allergy and Infectious Diseases as some kind of ur-authority who has trumped the will of elected officials.

The problem, of course, is that no one has actually said that Dr. Fauci is the person who makes the decisions. Except, that is, for right-wing conspiracy theorists who are trying to claim that the president of the United States isn't responsible for any of this. Fauci himself pointed this out.

"I have never made myself out to be the 'end-all,'" he calmly replied, noting that he's "a scientist, a physician and a public health official" whose job is to give advice about those matters, but never to "give advice about economic things."

This is the paradox of Trumpian authoritarianism. On one hand, Trump ran on the promise that "I alone can fix it", but from the second he set foot in the Oval Office, he and his supporters have depicted him as a helpless child being controlled by a nefarious "deep state" that is working against him. Now the narrative forming against Fauci holds that he somehow manipulated Trump or controlled his decisions on handling the coronavirus.

None of that is true, of course. Fauci didn't tell Trump to ignore months of warning that the coronavirus was coming. Fauci didn't force Trump to blow off ramping up the U.S. capacity to deal with the virus, and he certainly didn't force Trump to interfere with efforts to institute widespread testing. Fauci did indeed recommend the lockdowns, as did public health experts in nearly every country in the world — but only as a way to buy the U.S. time to institute better mitigation strategies. It wasn't Fauci's fault that Trump proceeded to waste the next six weeks tweeting and ranting at reporters during press conferences. Fauci certainly played no role in the Republican decision to reject and stonewall the kind of economic policies required to counteract the impact of the virus, further aggravating the already terrible economic impact of this pandemic.

All Fauci did was look at the evidence, and tell Trump how many people would get sick and die without implementing social distancing efforts. Trump and other political leaders always had it in their power to say, screw it, let them die. (Though there's no reason to think that heartless strategy would have saved the economy.) Trump was too much of a coward to embrace some Malthusian "herd immunity" approach from the beginning, and too lazy and stupid to take the measures that were necessary to make the lockdowns work the way they were supposed to.

Trump's cowardice is hardly unique, however. None of the right-wing advocates of the "do nothing" strategy are willing to confront how deadly it will be to ignore the science completely and "reopen" the country as if there was no deadly virus to contend with. (Which is already starting to spike upward in areas outside major cities.)

Instead, they're using the same playbook they have used for decades against climate change science: Deny that the scientists know what they're talking about and imply that ignoramus couch potatoes somehow know more than people who actually study things.

"Is Tony Fauci right about the science? Do we have any particular reason to think he is right?" Fox News Tucker Carlson said Tuesday night, in a segment in which he scoffed at the idea that reopening schools would spread the coronavirus.

It's worth taking a step back and understanding what Carlson is doing here: He's literally trying to argue that there's meaningful controversy over how viruses spread. Whatever rhetorical tricks he employs to make this sound smarter than it is, in the end it's germ-theory denialism, just as the "just asking questions" trick around climate science is climate-change denialism.

The reason we know schools spread disease is not because of untested, esoteric scientific spitballing. That airborne viruses spread from person to person through close contact is one of the most well-established scientific facts in all of human history. Even small children know that you get sick from things like the flu by coming in contact with other people who have it.

Nor do we lack data on such questions, as Carlson implies. Even a cursory glance at a map tracking the spread of the coronavirus makes it quite clear that it's spreading through human contact. That's why it exploded in dense urban areas at first, and why the decline in new daily cases only started to occur after rigorous social distancing and lockdown policies were implemented.

Carlson knows all this, of course. He's not actually confused by the theory of airborne virus transmission. Nor is Rand Paul (who is an optometrist with a medical degree), even though he claimed during Tuesday's hearing that "there are people on the other side saying there's not going to be a surge" after reopening. We know Paul understands how viruses spread, because he himself was infected with the coronavirus after being exposed through airborne transmission.

As with a lot of science denialism that comes from the right, this needs to be understood more as a troll, a posture that conservatives strike to draw liberals into "debating" whether or how viruses spread. Their real goal is to distract our attention from the real question, which is how government should respond to these scientific facts.

Because on that front, the answer is clear: The government needs to stop wasting time and start pumping more cash into the economy (ideally by raising taxes on the rich), while instituting the kind of testing regime we need to even start to consider reopening the economy. Republicans don't like that answer, so they want to talk about anything else, including starting a debate over how we can "really" know anything about how viruses spread.

The depressing truth, however, is that the government isn't going to do nearly enough to fix this problem. Some Democratic-run state governments, including California and Washington, have done about as well as they could with little help from the federal government, but governors can't do much to save the economy without federal help. Trump and the Republicans, of course, are determined not to do what is needed to repair this economic situation. Instead, we will apparently have to spend months listening to right-wingers undermine the nation's leading expert in infectious diseases and claim they're not sure how viruses spread, while the death toll mounts and the economy continues to melt down. And we still can't be sure whether American voters have wised up enough to elect Democrats in November.