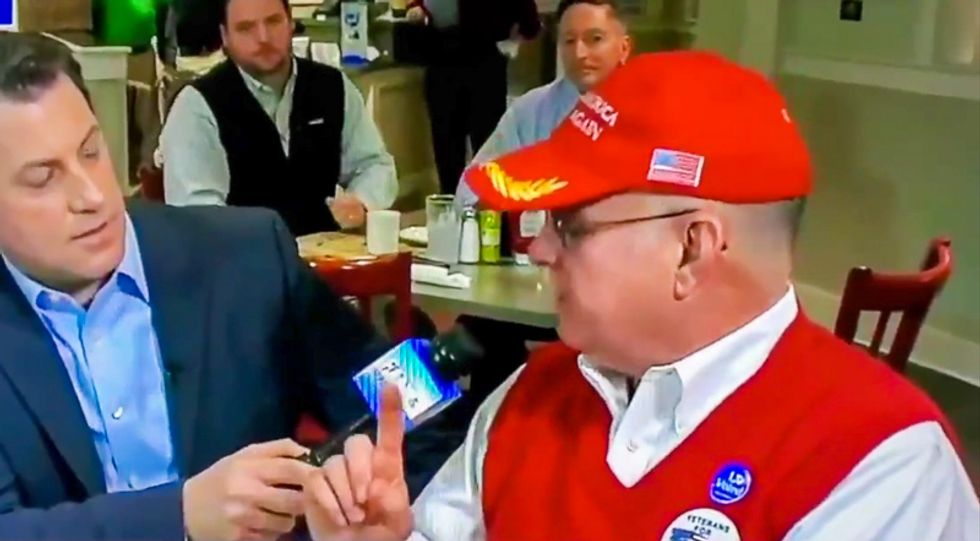 The Republican Party, driven by President Trump's baseless allegations of widespread voter fraud — which have been repeatedly debunked — plans to mount an "aggressive" effort to shape "whose ballots are counted" by recruiting an army of 50,000 volunteers across 15 key states to challenge voters "deemed suspicious," The New York Times reports.

The Republican Party and Trump's allies also plan to mount a large advertising campaign to cast Democrats as "agents of election theft," according to the report, even though the only legitimate recent example of large-scale election fraud was by Republicans in North Carolina.

The plan was hatched after a 2018 federal court ruling lifted a decades-long consent decree barring the national Republican Party to wage poll monitoring operations without consent from the courts.

The ruling simply "allows the RNC to play by the same rules as Democrats," Mandi Merritt, a spokeswoman for the Republican National Committee, told the Times. "Now the RNC can work more closely with state parties and campaigns to do what we do best — ensure that more people vote through our unmatched field program."

But the ban, which was first imposed in 1982, was only targeted toward the Republican Party after it was accused of trying to "intimidate" minority voters in a New Jersey governor's race.

"The RNC hired off-duty law enforcement officers to patrol polling places in minority precincts," the Democratic Party said in a lawsuit at the time. "The officers wore armbands that read: 'National Ballot Security Task Force,' and some carried two-way radios and firearms."

The RNC agreed to settle the case with the consent decree, which was then modified and extended in 1987 and again in 2009 after courts found repeated instances of voter intimidation.

Some Republican leaders have expressed concerns about the plan, warning that "many minorities view it as a fig leaf for racially charged voter suppression," Politico reported last year. But the plan has been pushed by Trump since the 2016 election, when he urged his supporters to "watch" voting precincts in black-majority cities.

After the court ruling, Trump campaign adviser Justin Clark bragged that the party could bring back the controversial poll-watching efforts.

"We were really operating with one hand behind our back," he said.

Republican strategists have pushed the baseless fraud allegation to recruit volunteers this year.

"This has been shown over and over," Kenneth Mayer, an elections expert at the University of Wisconsin-Madison, told the Times. "The continued insistence that there are material levels of intentional voter fraud is itself a form of fraud."

Though both parties monitor polls, the Republican focus on baseless allegations of voter fraud alarmed Democrats.

"This is a burn-it-down strategy, a strategy to win at all costs. They see this as central to victory," Lauren Groh-Wargo of Fair Fight, the voting rights group founded by Democrat Stacey Abrams, told the outlet. "They don't need to keep millions of people away.… Challenge a couple of voters here, a couple there, and it all aggregates up. They realize they're going to win or lose this thing at the margins."

The Republican Party is not alone in ramping up poll-watching ahead of November's election. A recording obtained by The Intercept showed a group of Republican donors and activists plotting to send Navy veterans and off-duty police officers to "inner city" and predominantly Native American precincts to challenge voter registrations.

Wisconsin Gov. Tony Evers, a Democrat, said the effort was an attempt to "prevent people from voting."

"This is bad for democracy," he told the Associated Press. "And frankly, I think … whoever does that, it will work to their disadvantage. It will make them look, frankly, stupid."

Mike Brown, the deputy director of the progressive advocacy group One Wisconsin Now, told the outlet that the plan shows that Republicans plan to use "underhanded tactics" to game the election.

"The strategy to rig the rules in elections and give themselves an unfair partisan advantage goes to Donald Trump, the highest levels of his campaign and the top Republican leadership," he said. "It's clear there's no law Donald Trump and his right-wing machine won't bend, break or ignore to try to win the presidency."

Five Hong Kong democracy protesters who reportedly fled to Taiwan have arrived in the United States intending to seek asylum, an activist group said on Saturday.

Their escape follows the mass arrest of democracy figures in Hong Kong under a new national security law that is part of a mounting crackdown by China on the financial hub.

US authorities carried out the 13th and final federal execution of Donald Trump's presidency Saturday, media reports said, less than a week before the White House is taken over by Democrat Joe Biden, who opposes the death penalty.

Dustin Higgs, a 48-year-old Black man, was executed by lethal injection at the federal penitentiary in Terre-Haute in Indiana hours after the US Supreme Court rejected a stay of execution, the New York Times reported.

Let's start with the basics. The US Constitution establishes a system of checks and balances consisting of three equal branches of government – legislative (Article I), executive (Article II), and judicial (Article III). On January 6, 2021, the head of the executive branch, Donald Trump, incited a mob to attack the legislative branch and then did nothing to stop it. As a result, Congress was unable to perform its constitutional duty, which was to certify the election of the candidate who beat him – President-elect Joe Biden.

That's an impeachable offense for which the Senate can and should convict Trump and bar him from ever holding federal office again.