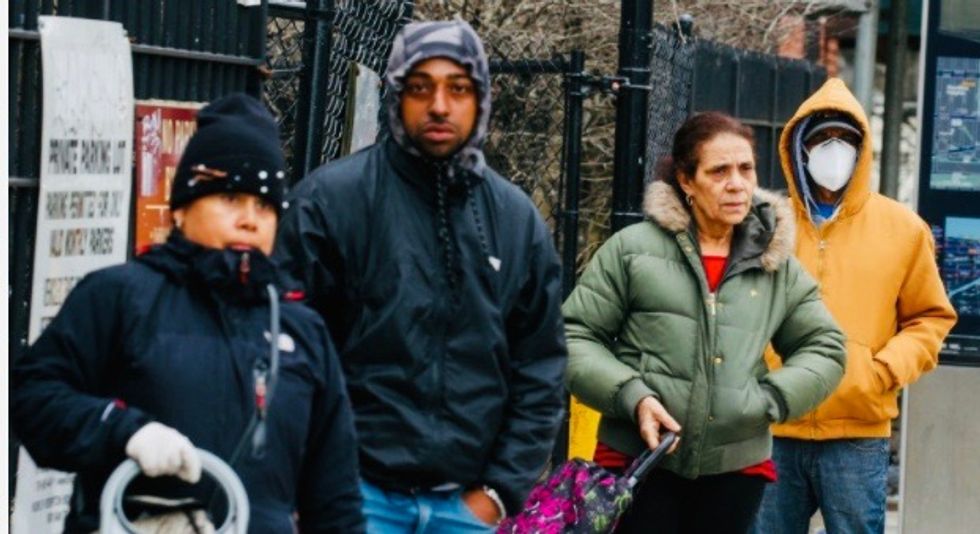 Job losses in the United States are slowing but totaled an unheard-of 38.6 million since the coronavirus pandemic lockdowns began, while officials debate what additional steps will be needed to rescue the beleaguered economy.

Another 2.43 million Americans were put out of work last week, fewer than the previous week but still among the highest figures on record, according to the latest Labor Department data released Thursday.

Initial claims for unemployment benefits appeared to have passed the peak hit in late March, but economists say joblessness is likely worse than the figures indicate since many people do not qualify for traditional aid.

AFP/File / VALERIE MACON Layoffs caused by the coronavirus in the United States have slowed after hitting their peak in late March, but are still devastating

"The dramatic spike in unemployment claims is trending down, but it still completely overshadows any precedent," Kate Bahn, director of Labor Market Policy at the Center for Equitable Growth, said on Twitter, noting that the latest number was three times higher than the record prior to the pandemic.

Democrats in Congress are calling for the Republican-controlled Senate to pass a $3.3 trillion spending measure approved by the House of Representatives last week to revitalize the economy, but President Donald Trump's administration has rejected the bill as he encourages more state government to loosen the lockdowns.

"We did the right thing, but we now want to get going... you'll break the country if you don't," he told African American leaders in a visit to Michigan, a key election battleground state.

The coronavirus pandemic has killed 93,406 people in the US and infected nearly 1.6 million others, according to John Hopkins University, despite widespread business shutdowns from mid-March to stop the virus's spread.

Weekly jobless claims declined but they remain well above any week during the 2008 global financial crisis and are more in line with job losses in the Great Depression last century.

AFP / Jonathan WALTER Unemployment in the US

"Forget the idea that they are coming down. If anyone thinks that 2.5 million new claims is anything but disastrous, they are deluding themselves," economist Joel Naroff said, warning that the economy is in the midst of a second round of layoffs.

The latest weekly number also does not include the 2.22 million people who applied for a federal program aimed at contractors and self-employed workers who would not normally qualify for traditional benefits.

House Speaker Nancy Pelosi pushed to approve the Heroes Act that includes $1 trillion for state and local governments, funds for hospitals, hazard pay for health workers, relief for devastated small businesses and another round of cash disbursements to hard-hit US families -- measures many economists have been calling for.

But Treasury Secretary Steven Mnuchin, though acknowledging a "strong likelihood" additional aid will be needed, rejected Pelosi's effort as "obviously" partisan, and said officials will need to take some time to consider the next steps.

Pelosi fired back at Republicans, including Senate Majority Leader Mitch McConnell, for dragging their feet.

"Instead of telling laid-off workers to pause, Leader McConnell and the Senate GOP need to come to the negotiating table to help deliver the relief to protect lives and livelihoods."

The Federal Reserve has rolled out trillions in new liquidity to ensure markets continued to function through the downturn, but the central bank's Chair Jerome Powell said additional government spending is necessary to spur a recovery.

AFP/File / Frederic J. BROWN The National Association of Realtors said existing home sales -- a key sector in the world's largest economy -- plummeted in April, the first full month the US lockdowns were in effect

During a video conference with community leaders across the country, Powell repeated earlier warnings of unprecedented economic uncertainty, saying "questions only the virus can answer complicate the outlook."

Adding to the building picture of the damage, the National Association of Realtors (NAR) said existing home sales -- a key sector in the world's largest economy -- plummeted in April, the first full month the lockdowns were in effect.

But realtors and economists are optimistic they will pick up quickly as the economy reopens due to very low borrowing rates.

NAR's Chief Economist Lawrence Yun said home sales have been "temporarily disrupted" by the pandemic but pointed to a year-on-year price increase of 7.4 percent as evidence that "listings that are on the market are still attracting buyers."

A Philadelphia Federal Reserve Bank monthly report released Thursday showed a slight improvement in manufacturing activity in the region the bank covers, though it was rebounding from a 40-year low in April.